"I’m prepared for anything and prepared for him to be the best he can
possibly be because he’s dealing with a guy who is at the best point of his
career." - Mac Danzig 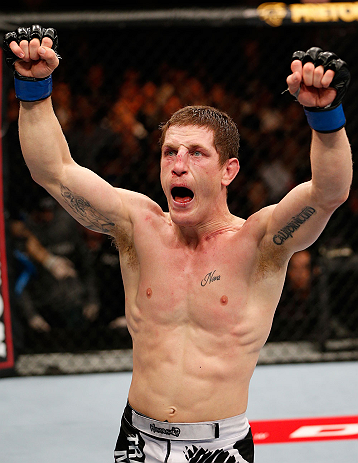 In the realm of combat sports, rhythm is something which needs to be found on multiple fronts.

While a fighter’s tempo, pace and comfort zone are automatically linked with their ability to find their respective grooves, there is a necessary rhythm that needs be found outside of the Octagon as well. Training camp decisions and personal issues can bring heavy distractions to the forefront and throw a fighter’s stride out of whack.

Where Mac Danzig doesn’t invest much stock in excuses and things that hover on the fringes of his personal stratosphere affecting a fighter’s performance, he does understand the need to bring everything into the here and now. The TUF winner with an impeccable touch for creating art behind a camera (www.macdanzigphoto.net) has invested the sweat and mental equity in order to bring all aspects of his life into focus, and just as he sees the world with a unique view through the lens, the 33-year-old has also learned to narrow his focus as the action unfolds in the fires of hand-to-hand combat.

Nevertheless, throughout the process of growth and education, Danzig has been forced to deal with the ebbs and flows of competing on the biggest stage in mixed martial arts against the some of the very best competitors in his weight class. While there have certainly been setbacks, Danzig has continued to focus on the positives and chalked up every part of the experience to the journey as whole.

This has brought the California transplant to a place where he is at ease with himself and the unstable environment in which he stands. And this makes him a dangerous individual come fight night.

“Performing to the best of my abilities and realizing my potential is what matters the most to me right now,” Danzig said. “Continuing to progress and to live in the moment and to not worry about the past or what the future can bring, I need to be right here and now in the moment. A fighter who does that, and is in the moment and truly experiencing every moment as it is happening and being in the now, becomes a great fighter. The truly great fighters of our time are doing exactly that. When you have two fighters in that state you are going to have an excellent contest.

“That is what I’m focused on. You can watch tape and all that but it doesn’t really matter. It doesn’t matter what a guy has done leading up to the fight, it comes down to what is happening in that moment and your ability to improvise. That is what is so cool about the sport. The most important thing for me is living in the moment, fighting in the moment, being there and doing it to the best of my abilities. If I can keep doing that then great things are going to happen for me.”

For Danzig, his ability to remain in the present hinges largely on him being able to put the past to rest. Where he has shown flashes of the talent that made him a fighter to watch coming off the hit reality program, inconsistencies have kept him from establishing traction in the lightweight ranks.

That being said, in recent years he’s been able to gain solid ground in that particular department. Where he was locked in a three-fight losing streak from 2008-2009, the Ohio-born fighter has been able to keep the progress steady and absorb the handful of setbacks he’s suffered as learning experiences.

A great example of Danzig’s lingering paradox came in his most recent two fight swing against TUF alum Efrain Escudero and former Pride champion Takanori Gomi. While Danzig was able to best Escudero at UFC 145, he was unable to use that win to spark momentum as he was edged out in a hard fought split decision against “The Fireball Kid” at UFC on FUEL TV 6 back in November of 2012. While the loss doesn’t sit well with Danzig, he has still been able to take some positives out of the experience.

“It was just a fight,” Danzig said. “It was fifteen minutes and the positive I took from the fight is that I’m continuing to evolve. You look back on a fight and you analyze crucial errors, but I think the thing that lost me the fight is when I threw a knee and was off balance and it looked like I got knocked down. Anytime someone throws a strike in this sport and the other person falls backwards, whether they were hurt from the strike or off balance, everyone considers it a knockdown. All of a sudden people are scoring the round in the other guy’s favor. There are some things I should have done to nullify the way that looked, but then you end up fighting for the judges.

“I wasn’t really happy with the way I fought because I feel like I should have finished that guy. But you look at what he’s done recently. I thought he beat Diego [Sanchez] and he looked really good against me. It was a good little scrap with Gomi and it’s nice to fight a guy who is a legend like that when he’s on top of his game doing his best.”

Where he squared off with one of the most prolific power punchers in lightweight history in his last bout, his next challenge will once again match him up with an opponent who has made a career out of displaying devastating power.

The savvy veteran will mix it up with former contender Melvin Guillard at UFC on FOX 8 in Seattle, and while “The Young Assassin” shares a few of the attributes Gomi brought to the table, Danzig is expecting an entirely different fight on July 27.

“There are some similarities, but the difference is going to be how I approach this fight,” Danzig said. “I think I gave Gomi a little too much respect because I was thinking about the one thing he does have with power and being careful to avoid it. I was telling myself not to get caught up in any exchanges, not to leave myself open, and it caused me to fight a little more tentative than I should have been…at least in the first round anyway. I don’t think I’m going to be fighting Melvin that way.

“Melvin is always going to rely on his power and his speed. He has some good movement and it makes things hard for guys who just want to stand there and counter because he jumps in and throws fast and hard then jumps out. Guys can’t really counter him because of that. With Melvin, I honestly expect him to do something different. He has a different training camp and I wouldn’t be surprised if he tries to throw a wrench in the mix or tries to change things up on me.

“I’m prepared for anything and prepared for him to be the best he can possibly be because he’s dealing with a guy who is at the best point of his career and this is the best me that I’ve ever been,” he added. “I’m more focused than I’ve ever been and if he is good enough to beat me now then he’s really good. I’m just looking forward to doing the right things, going in there and using my mind effectively, and staying calm. He’s in for a fight, that’s for sure. I’m not going to run away from him and look for takedowns; he’s in for a fight.”

Where Danzig has experienced peaks and valleys throughout his career, Guillard is certainly familiar with the highs and lows as well. In the early stages of his career, the Louisiana native was knocked for not living up to the tremendous potential attached to his unique physical skill set. But after Guillard appeared to get things together and rose to become a potential title contender, he hit another rough patch that led to him being pushed to the edges of relevancy in the lightweight fold.

If the drop in stock wasn’t enough, Guillard also dealt with legal issues and bouncing around to several training camps before he settled down at the Grudge facility in Denver. While Danzig acknowledges how difficult personal struggles can be when balancing a fight career, he doesn’t believe any of Guillard’s issues will have an impact come fight night.

Then again, whether they do or don’t affect his performance is not a concern for Danzig. His only care is what he does when the Octagon door closes, and he has every intention of making the most of his night at the Key Arena.

“I do think I’m mentally superior in this matchup but I don’t think that has to do with anything that has been going on with him lately,” Danzig said. “If you look at him jumping around to different training camps, I don’t think that necessarily means anything. I think he’s just looking for a place to train and finally found one.

“I remember fighting Josh Neer, and five weeks before the fight he got in trouble with a D.U.I. or something like that. He was in jail for a night on New Year’s or something because he was out partying and people were saying he’s not training hard and partying. For guys like that where there is nothing else to do in Iowa but party and that is a part of his life, it is what it is. But it didn’t change the fact that he was still on top of his game, was focused, and did what he had to do on fight night.

“It really doesn’t matter who I’m fighting,” Danzig offered in conclusion. “He could be mediating for 15 hours a day for the past 16 weeks and be on top of his game mentally for all I care. It really doesn’t matter to me. Whether he is completely out of focus and messed up worrying about all the other things in his life or he is 100%, I’m planning on fighting a guy who is 100%, and if he’s anything less it will just mean a quicker win for me. That’s the only way I can really look at it.”