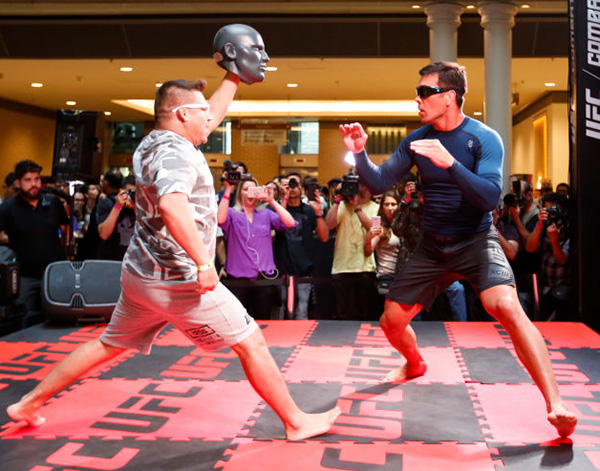 The first to perform was former welterweight title challenger Demian Maia. Born and raised in São Paulo, the hometown hero received a warm welcome from the fans.

“It's a huge pleasure,” he said. “I only fought once here in São Paulo. My dream has always been to fight more in Brazil. When I started fighting, it was a distant dream and people said that I would end my career without fighting here,” said the always respectful fighter, visibly comfortable to be at home.

Next in line was Derek Brunson. Being the more reserved type, he demonstrated part of his takedown arsenal, lifting a training partner and taking him to the ground on a few occasions.

“I'm a wrestler, but I can knock people out. Expect some slams, and expect a very exciting fight,” he said.

Taking the "bad boy" approach, Maia’s opponent, Colby Covington, was the only one booed by the fans. Under the already traditional "uh, vai morrer" chants, "Chaos" embraced the role of the villain, teasing the audience with kisses and encouraging the boos.

"There is no pressure (in fighting in Brazil). That's what I do, I'm a bad guy. I've traveled around the world and I've beat up guys in their home cities. This reception is amazing. Who doesn't love hate? If hate doesn't fuel you and get your blood boiling, what will? It's going to be a first round finish." 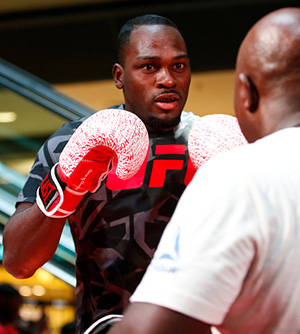 Finally, it was time for Lyoto Machida to climb on to the mats. "The Dragon," who makes his return after more than two years away from the Octagon, has shown that he has new techniques he has been working on.

In addition to demonstrating his kicks and footwork, which are so well known to the public, Lyoto wore a pair of special glasses that, he said, help his reflexes.

"It's a pair of goggles that slows down your movement. It flashes, I control the speed, and the slower it flashes, you almost go blind and need to react fast."

Getting a big ovation by the public, Lyoto thanked them for all the support.

"The expectations are the best. There is no better place to go back than here in Brazil. Speaking our language and being with my people, this is priceless. Saturday is all ours. Let's cheer for our guys. I'll be in the main fight, but there are several Brazilians who need you."