Lyoto Machida: No Time to Waste 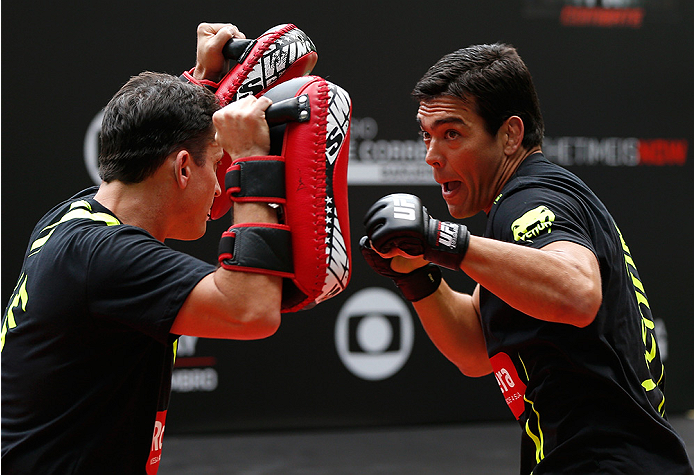 One more round. That’s all Lyoto Machida may have needed to dethrone Chris Weidman in their UFC 175 fight for the middleweight championship of the world.

Back in the early days of the UFC, with no time limits, “The Dragon” might have become just the third fighter in the promotion’s history to hold belts in two weight classes.

But he’s not. In 2014, with five-round fights the rule in a title bout, 25 minutes just wasn’t enough for the Brazilian. And it sticks with him five months later as he gets ready for his Saturday main event with CB Dollaway in Barueri, Brazil

“I put Chris Weidman through some hell in the fourth and fifth rounds, and I still felt I could win, as Chris was pretty much done, but by then, the fight was done,” Machida said.

The fight, won by Weidman via unanimous decision, earned Machida a Fight of the Bonus and he retained his place among the best middleweights in the world, but that’s been little consolation to him, knowing that if he got off to a faster start, Christmas would be a lot different this year.

Now 2-1 at 185 pounds after a run at light heavyweight that saw him with the UFC’s 205-pound title in 2009, Machida faces Dollaway at a point in his career where there is no room for error. And he knows it.

“I need this fight,” the 36-year-old said. “I think every fight in the UFC is important, and the same way that this can put me back in title contention, if I lose this fight it can knock me back down farther. Every fight in my career at this point is important.”

Not surprisingly, Machida is the favorite heading into the bout, but Dollaway is not content just to show up. Showing the best form of his career, the former Arizona State University wrestler is aware that a win over Machida is a life-altering one. And that’s not an aspect of the fight lost on the Brazilian, who is expecting a war from his foe.

“CB is a tough guy and he’s coming off some great fights,” he said. “He can wrestle, he can strike now, and he’s decent on the ground. So he’s a very complete fighter. He’s also a guy who’s had some success against Brazilians, and at this point of my career, I’m all about staying active, so this is a great opportunity for me to come in and fight. I just have to be aggressive and implement my game.”

That means the wait and counter Machida may be gone, because he doesn’t want to risk having the same costly result of the Weidman bout, where he got started fighting too late.

“I have to have some convincing wins and hopefully I’ll get another opportunity to fight for the belt soon,” he said. “I’ve got to go out there and put on some good performances.”

It’s a lot of pressure for “The Dragon,” but then again, he’s used to that.

“All the fights for me are do or die. This is no different.”