Lyoto Machida: Here to Stay at 185

"I think this is one of the toughest divisions there is right now. There
is a lot of talent and I want to fight for the title. I’m here to stay
and I’m going to be the champion." - Lyoto Machida 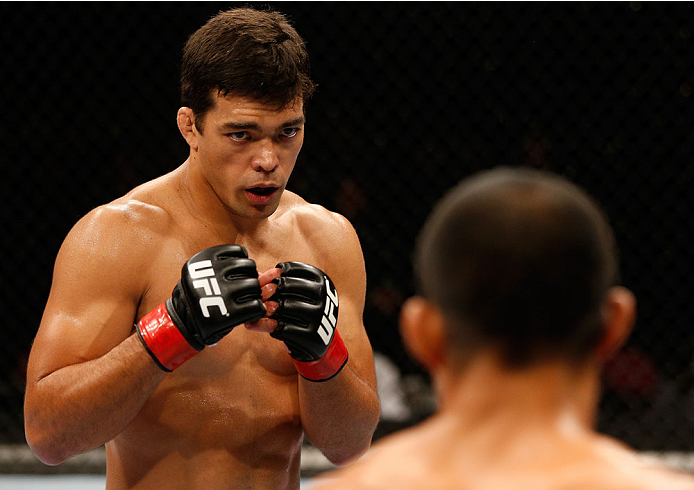 “Complex” may not be the perfect word to sum up Lyoto Machida’s fighting style, but it certainly resonates.

“The Dragon” has manipulated an extensive history in his family’s “Machida Karate,” which is an offshoot of the Shotokan variety, and infused elements of BJJ and Sumo wrestling, to craft one of the most unique skill sets to ever compete inside the Octagon. So successful was the Brazilian striker’s approach that the first 16 men he faced in live competition had little to no idea how to handle what he brought to the table.

When a fighter is at a huge disadvantage on the feet, he’s taught to take the action to the ground, but how can you take down what you can’t get a hold of? Where footwork has always been an asset to fighters who prefer to keep things standing, Machida took elusiveness to another level. Those traits paid huge dividends as Machida climbed the rankings in the 205-pound division to eventually become the light heavyweight champion by melting Rashad Evans in spectacular fashion at UFC 98 in 2009.

While “The Machida Era” would be short lived atop the UFC’s crown jewel division, that didn’t make solving the puzzle he presented any easier of a task. After dropping the title to Mauricio “Shogun” Rua in their rematch at UFC 113 in 2010, the 35-year-old would come out on the losing end of three of his next seven showings. That said, only his submission defeat to light heavyweight phenom Jon Jones at UFC 140 was the only decisive of the group, as his setbacks against Quinton Jackson and Phil Davis were highly debatable decisions that played out on the judges’ scorecards.

Nevertheless, losses on a fighter’s record at the highest level of the game are crucial matters, and following his defeat against Davis at UFC 163 last August, Machida was forced to make a decision. The loss to “Mr. Wonderful” stunted any momentum he had built toward another shot at the light heavyweight crown, and was pushing him into limbo where divisional relevance was concerned. With the stakes at an all-time high for the Brazilian karate master, he decided to make the cut down to 185 pounds and try his hand in the middleweight division.
While it was an option that had been rumored for some time, it took the loss to Davis for Machida to finally pull the trigger. And the results were phenomenal.

Where he was originally slated to face Tim Kennedy in the main event of the third “Fight for the Troops” card, he stepped in to replace an injured Michael Bisping to face friend and former training partner Mark Munoz in Manchester, England. It took Machida less than a full round of work to dispatch the “Filipino Wrecking Machine,” as a left head kick sealed the deal. The highlight-reel victory not only re-ignited talk of Machida being one of the fight game’s pound-for-pound best, but immediately put him on the title radar at 185 pounds.

“I feel better at this weight class,” Machida said. “Not only technically do I feel strong and fast, but I’m able to fight guys that are my size and don’t have to face guys that are bigger than I am. I think I also showed everyone that I can go in there and finish fights.  It’s just a matter of the different opponents and the different opportunities you get in a fight.

“I feel like dropping weight and re-inventing myself is somewhat of a rebirth for me. It’s a trick I had up my sleeve and I’m using it now.”

His speed and strength will certainly come into the equation in his next outing, as he is set to face off with another former champion in ex-Strikeforce boss Gegard Mousasi. The matchup will pit two of the most versatile strikers in MMA against one another and will be the main event when the UFC returns to Jaragua do Sul for Fight Night: Machida vs. Mousasi this Saturday.

“Mousasi comes from Muay Thai and has great striking, but he’s a predictable fighter and his speed isn’t great. I’m the opposite. I’m very precise and fast and that is how I think our two styles differ,” Machida said. “I come from Machida Karate, which really prepares you for real life combat. We try to use techniques that are unpredictable.

“My karate background gives me confidence when I go in there. I come from a style of karate that has very few rules and is the base for everything for me. It’s where I started off in martial arts and is involved in every part of my style. You are always learning. It’s not always learning new techniques, but how to take advantage of what your opponent does to impose those techniques. It’s going to be a tough fight. It’s a five round fight. I know he’ll be well prepared but I’m going to win.”

Where the bout will only be Machida’s second showing in his new weight class, it will also mark the first time the former Strikeforce champion will step foot inside the cage at 185 pounds since 2008. That said, both men are considered to be high on the divisional hierarchy and this bout is absolutely a “must win” if either hopes to keep their title dreams alive in 2014.

“With this fight and knocking out Gegard Mousasi, I will be ready to fight for the belt. I will be the next title contender.”

If Machida wants to raise his stock as a legitimate threat to the middleweight crown, a victory over a highly touted opponent like Mousasi would certainly serve to bolster that purpose. That said, the 185-pound collective has taken on a much different appearance than it looked only a year ago.

Long reigning king Anderson Silva has been dethroned and suffered a career-threatening injury in his bid to reclaim that title at UFC 168. Former rising star Chris Weidman became a certified sensation by defeating Silva twice in a calendar year, and the ever-resurgent Vitor Belfort established himself as a title contender on the strength of three knockout victories in 2013.

That type of shake up has set the stage for Machida to make a spectacular run for the gold, and he intends to send a loud message with a victory over Mousasi on Saturday night.

“I think there are a lot of changes being made to the division,” Machida said. “Anderson [Silva] losing, [Chris] Weidman being the champion and Vitor [Belfort] is the No. 1 contender shows there are a lot of things changing in the weight class. I think this is one of the toughest divisions there is right now. There is a lot of talent and I want to fight for the title. I’m here to stay and I’m going to be the champion.”