Lyoto Machida: Focused on Henderson, Not the Future

"Although he is a tough opponent, a guy that has never been knocked out, I have what it takes to knock Dan Henderson out." - Lyoto Machida 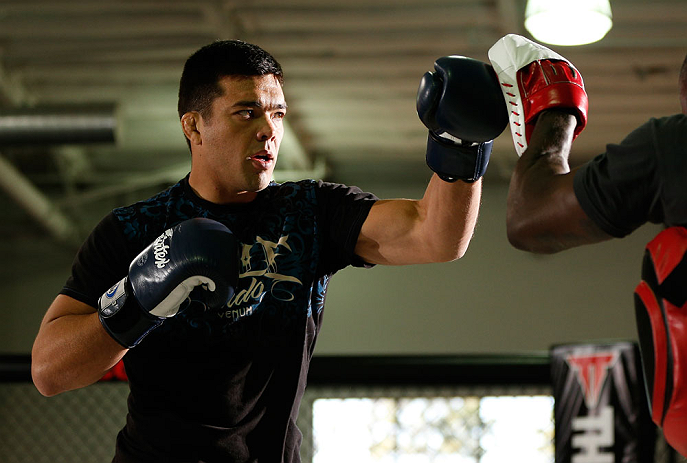 When he’s in a good mood, White laughs, makes some joke about how “you guys ask me this every time,” says “He’s in the mix/We’ll have to see,” and moves on to the next question. When he’s grown tired of that line of questioning, he simply says, “I don’t know,” and looks to find the next media member holding a microphone, hoping they’re not going to ask him what’s next for someone else on the dais.

Yet as much as the man standing at the podium is never really fond of the question, there is a group that dislikes the question even more – the fighters themselves.

For the last two month-plus, they’ve spent countless hours per day preparing to step into the cage with someone who will try to punch them in the face, and before they’ve even had a chance to test themselves and the game plan they’ve prepared, we want to know what comes next. Add a title into the conversation, and you have even more questions that have to be asked, but can’t truly be answered.

Lyoto Machida is in the midst of this right now.

The former UFC light heavyweight champion is days away from facing off with Dan Henderson, the only man to hold titles in two weight classes simultaneously in a major mixed martial arts promotion, and a first-ballot Hall of Famer if there were such a thing in this sport. It is a dangerous matchup, and one that “The Dragon” has been preparing for diligently with his team of coaches and training partners at the Black House facility in Los Angeles.

“Dan Henderson is a great champion; he’s done a lot for the sport, and he has great significance, so it’s hard to talk about (what comes next) before the fight even happens,” Machida says through translator Derek Lee. “It’s hard to say because the fight hasn’t even happened.”

Saturday night, the two light heavyweight standouts will step into the cage together in the co-main event of UFC 157 in a pairing that came together as a result of a chaotic year in the 205-pound ranks.

At the beginning of August, Machida knocked out Ryan Bader, leading to White proclaiming the former champion as the division’s new #1 contender, the man who would face the winner of the impending September showdown between Henderson and champion Jon Jones.

One knee injury, one decision to turn down a short notice fight with a dangerous man, one cancelled event, and six months later, here we are, sitting on the eve of what should be a terrific physical chess match between two proven talents, and we’re fixated on what comes next, leading Machida to a familiar refrain.

“I respect Dan Henderson a lot, and it’s a really tough fight. There really is no point in talking about what comes next until I fight him.”

Thankfully, Machida has been a little more open in his willingness to discuss what his opponent will bring to the cage Saturday night, and how he will come away from the UFC 157 co-main event victorious. Of course, “a little more open” with someone as traditionally reserved with his thoughts as the 34-year-old Brazilian still only gets you about three-percent of the response the same question would elicit from one Chael Patrick Sonnen.

“I think Dan Henderson is a very tough fighter,” Machida started in his assessment of his fistic dance partner on the UFC Countdown show for this event. “He’s a guy with strong hips, but he doesn’t use his wrestling too much. His ground game is very defensive. He has strong striking and good takedowns. He can get out of bad situations.

“Although he is a tough opponent, a guy that has never been knocked out, I have what it takes to knock Dan Henderson out.”

This contest has obvious title implications, with Henderson and Machida resting at #1 and #2 respectively in the latest edition of the UFC rankings. Earlier this month, the former champion shared his belief that the winner of this matchup of the division’s top two challengers should produce the next title challenger.

With the door to question about finishing Henderson and his continued pursuit of the title he once held seemingly ajar, the time seemed right to ask where the man with memorable finishes against Randy Couture and Rashad Evans (to name a few) would rank becoming the first man to knock out the former Pride and Strikeforce champion?

“I don’t want to talk about it too much; I’m not worried about that,” Machida answered through his translator, slamming the door to questions about the future closed, finishing with a familiar refrain. “It’s hard to talk about it before the fight even happens.”

As much as we might want to get annoyed with athletes who trade in clichés and rattle off variations of the same five or six answers in every interview, imagine what it must be like on the other side of the microphone -- cameras focused on your face, tape recorders collecting your every word, questions you’ve answered numerous times in the past asked again.

And once more just for good measure, before the inevitable happens.

“What comes next after you beat Dan Henderson?”

Like everyone on the card, it’s a question Machida has been asked countless times in the last two weeks, and dozens more in the last two days. Only with the stoic and pensive karate fighter, he doesn’t begin his answer with “Not that I’m looking past Dan Henderson” before adding a “but” and rolling out his five step plan for regaining the light heavyweight title.

“There really is no point in talking about what comes next until I fight him.”

It may not be what we want to hear, but you can’t knock the logic.

Thankfully, it’s only a couple more days until Machida and Henderson share the cage, and the most popular fight week question stops being a question about the future, and starts to be a question about the here and now; one that is answered with every reporter’s least favorite answer:

“It’s up to Dana and the UFC. I’ll fight whoever they want me to fight.”