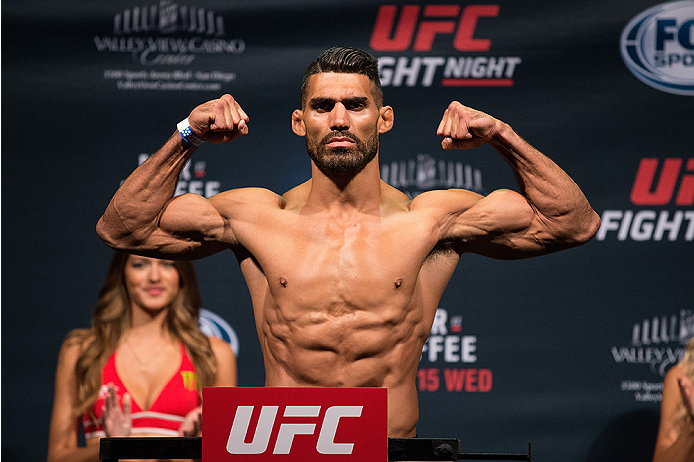 Technology has changed the fight game in many ways. Back in the days of the fictional Rocky Balboa, fighters would put a picture of their opponent on the mirror to motivate them and keep them focused on the task at hand. These days, those pictures go on cell phone backgrounds.

“My girlfriend ain’t too happy about that one,” Lyman Good laughs, but for the UFC debutant, seeing his Wednesday opponent Andrew Craig at all times is a key part of his mental preparation.

“Every time I train, I train with the mentality of me being in that cage with the crowd roaring and with thousands of people in attendance watching,” he explains. “And I train not just physically, but emotionally, and I always train with visualization. So I see him all the time and I think about him all the time, and every time I train, I train with him in mind and I train while visualizing being there, so this way it’s nothing new to me.”

It’s the process that Good has become accustomed to, and if wins in 18 of 22 pro MMA fights are any indication, it’s working for the 30-year-old New Yorker, whose arrival in the UFC has been welcome news for fans who have been following his career since his debut in 2005.

“It’s a very humbling experience, and I’m very grateful to have that kind of support,” he said. “I know that as long as I’ve been around, I’ve always been myself and an example of being very humble and very respectful towards everybody, and I think that’s probably what weighed in on some people wanting to be behind me and support me. That, or they’ve just seen me fight, so they’re supporting me for that reason. There are times when it’s still not something I’m used to. It’s very surreal a lot of times, but it’s something that I’m absolutely grateful for and I would never take it for granted. Everybody’s support is just another reason for me to keep doing what I’m doing and to do it at my fullest potential so I don’t let anyone down.”

In the eyes of many of those fans, Good’s UFC debut has been a long time coming, as he’s been seen as one of the top welterweights outside of the promotion for several years. Owner of wins over UFC vets Nah-Shon Burrell, Dante Rivera, Hector Urbina and Mike Dolce, as well as European standout Jim Wallhead, Good first made his name in the Bellator promotion, winning their championship in 2009. Losses to Ben Askren, Rick Hawn and Andrey Koreshkov slowed his momentum a bit, but when it was announced that he would be competing for a spot in the Ultimate Fighter season 19 competition in 2014, most assumed that was his way in to the UFC.

It wasn’t, as he lost a decision to Ian Stephens.

“It’s hard to bounce back from that immediately when you think that was your ticket in,” Good said. “So right after the show, I was saying to myself ‘why did this happen?’ The opportunity came so close, close enough to where it was almost in my grasp, and it didn’t work out. So it did weigh on me in the sense that I felt like I blew it.”

The journey wasn’t over yet though, and Good got back in the gym and back to work.

“You’ve got to pick yourself back up because no one is going to do it for you,” he said. “You’ve got to be your own motivator in life and push and just keep grinding away. Instead of looking at the down side of it, because that’s so easy to do, I said I’m going to learn from that and I think that was an opportunity for me to pick up on the fact that I just needed improvement in certain areas. Obviously, (in the Stephens fight) I was exploited in an area that I’m not as strong in as far as my wrestling, and I used that as fire to motivate me and just go back. I drilled so much that I’m a lot more comfortable and I feel that, if anything, it’s become part of my game now when I fight.”

Good went 3-0, 1 NC with three finishes in his post-TUF 19 fights, and when Edgar Garcia fell out of Wednesday’s fight against Craig due to injury, Good got the call. He didn’t scream “I told you so,” or “what took so long?” after getting his first UFC contract; he went back to work, not just getting ready for Craig, but also teaching his students at the Tiger Schulmann Gym. It’s just what he does.

“I’m a firm believer in grinding away, not focusing on or getting hung up on all the negativity in life, because that’s so easy to do,” Good said. “Negativity spreads like wildfire, and it’s something that can crumble you if it gets to you. I’ve been a fighter my entire life, and I’m talking about outside the cage, and I had to be strong for many reasons. So when negative things happen, all I can say is that the more people try to hold me down, the stronger a person I become because of it. Life is life. Things are always going to get in the way, and you have to stay above it and keep your head up no matter what and stay positive, because opportunities will come; you’ve just got to be ready for it.”

He is ready for it, and to this day, he credits that positive attitude and inner strength to the person who introduced him to martial arts when he 11 years old – his mom.

“I had a strong mother who went through a lot of things, and I learned from her,” Good said. “She’s tough. She’s pure New York and she’s got that New York attitude (Laughs), but she doesn’t show me weaknesses. She shows me to be strong and be tough, no matter what. It’s only been her and I. I haven’t had a dad around, but she’s filled in both roles, so I get all that from her.”

Her reaction to her son being called to the UFC was what you would expect.

“She was ecstatic, she was so happy for me,” he said. “She was one of the people saying ‘it’s about damn time.’”

More importantly though, what did she cook for her son that night? Pernil? Tostones? Arroz con Pollo?

“It’s what she didn’t cook that night, knowing that I had to train for a fight,” Spanish Harlem’s Good laughs. “She took away all the good stuff.”

Good does expect a proper Puerto Rican meal when he returns home from San Diego. In the meantime, what doesn’t former middleweight Craig expect when he makes his welterweight debut against “Cyborg?”

“I think the power, the tenacity and the aggression of someone who is in the 170 weight division and has been fighting there their entire career,” Good said. “But I think it’s a great matchup because stylistically we’re almost similar, and that why I’m very excited for this fight.”