Vicente Luque knows exactly what kind of fight he brings to the table when he steps into the Octagon.

The kind with an early ending.

All seven of his wins in the UFC have come by way of a finish, and all but two of those have ended in the first round. With that said, he still finds himself outside of the welterweight division’s top-15. He’s not fretting about that, though.

“If I have to, I’ll beat everybody that is outside of the top 15 until they can’t give me anyone else but the ranked guys,” Luque said. “So for me, it’s just keep doing what I’m doing, and the fans recognize it, and eventually, everybody will.”

After a stunning first-round knockout of UFC debutant Jalin Turner at UFC 229 pushed Luque’s current winning streak to three, the New Jersey-born Brazillian-American faces Bryan Baberena, who is coming off his own first-round finish when he took out Jake Ellenberger at Fight Night Lincoln. 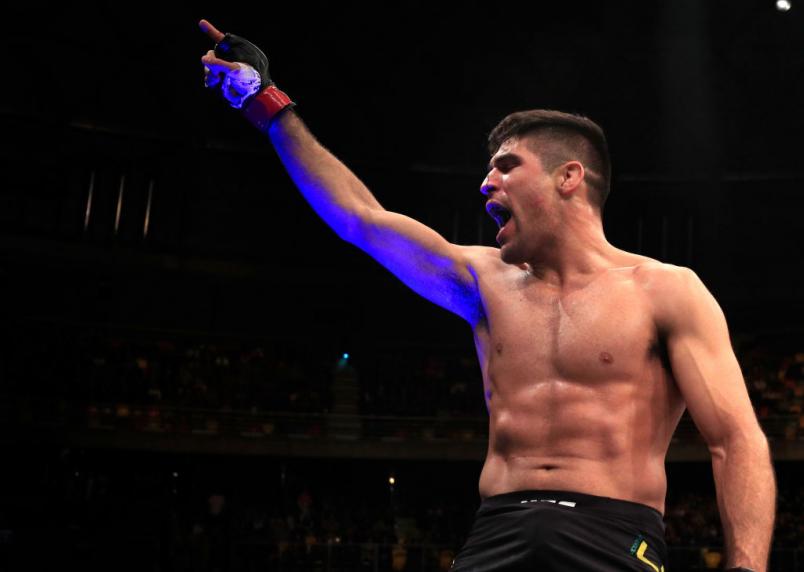 SANTIAGO, CHILE - MAY 19: Vicente Luque celebrates after his knockout victory over Chad Laprise of Canada in their welterweight bout during the UFC Fight Night event at Movistar Arena on May 19, 2018 in Santiago, Chile. (Photo by Buda Mendes/Zuffa LLC)

Luque has credited working with a sports psychologist for helping him improve not only his mental approach to fights, but also to the choices he makes once the fights are over. We caught up with him to talk about that as well as his knack for finishing fights and more as he prepares for his bout in Phoenix.

UFC: On your three-fight winning streak, how have you grown over that stretch?

VL: Well I’m coming off three wins right now, and before that, I had a loss, but I was coming off four wins before that all by finish, either knockout or submission, so I feel really that I’m doing the right thing. I’m working well in the gym. I’m taking care of my nutrition, taking care of everything I got to do outside of the fight, and when I get to fight night, I go there and do what I got to do also – that is finish fights. And I think everybody that watches enjoys it. I think the UFC enjoys it as well.

UFC: You have a high finish rate. What is it about the way you fight that enables you to consistently find a finish?

UFC: You’ve said you won’t reach your full potential until you retire. What did you mean by that?

VL: What I believe is I’m a guy that, now I’m 27 years old, I’ve been working. I’ve been evolving every fight. But I still feel like I have a lot to evolve. I still feel like I can grow so much more. I really think that you have to always keep looking for improvement everywhere, and that’s my goal, so until I retire, I’m still going to keep on looking to become a better fighter and to be a better version of myself.

UFC: How do you balance working on a better version of yourself and still maintaining a high level of confidence when you step into that Octagon?

VL: The thing is, I’m confident because of the work I do. I’m not confident just because I think I was born the way I was, so I know there’s a lot of work put into this, and for me to be where I am today, I have to work my ass off for that. I know every time I get into the Octagon, I’m facing another a human being like I am, so he can knock me out. I can be the guy with the lights out there and wake up and not know what happened. But at the same time, I know I can do that to my opponent, so I feel like we’re on an even playing field. He is the same as me, so I’m going to go in there, do my best and get the win.

UFC: You’ve talked about how you’ve used a sports psychologist. How has that helped you with your mental approach?

VL: Well in many areas. Not only in the fight specifically. That’s something we’ve worked a lot, so being in an intelligent mode during a fight, not emotional, but yet getting in there and doing what you got to do to win the fight. That’s a big point, and the work ethic. So once I’m back, after the fight, I take a week off, but that week off, I still have the mentality of I’m going to eat good stuff. I wasn’t a big dieter before. I’ll still eat a burger or whatever, but I’m still thinking of the goal is to be a champion, so I’m not just going to do whatever I want to do right now. I’m going to focus and keep myself always in good shape, and then once I get back into training, it’s about always getting to the gym and giving your best effort. Keeping out of injuries, but always giving all that your body can give, and all these kinds of things, that’s where the psychologist has helped a lot.