“Until I retire, I haven’t reached my full potential, so it’s always about working more, working hard and trying to get as far as I can go. I want to be the best Vicente Luque I can be.”
By E. Spencer Kyte • Feb. 12, 2019

Despite earning three straight finishes and winning seven of his last eight, all by way of stoppage, “The Silent Assassin” continues to ply his trade quietly as he readies to make his first appearance of 2019 this weekend in Phoenix against perennial tough out Bryan Barberena.

A member of Team Blackzilians on Season 23 of The Ultimate Fighter, Luque debuted in the Octagon at age 23, dropping a unanimous decision to American Top Team representative Michael Graves on the show’s summer finale. Since then, the Brazilian welterweight has been taking out opponents with precision, the only hiccup being a decision loss to emerging contender Leon Edwards.

Equally dangerous on the ground or throwing hands, Luque has developed into an all-around threat and someone with the potential to become a force in the welterweight division, even if others haven’t quite recognized that yet.

Not that he has any intention of letting his current run of success going to his head.

“I came into the UFC really young at 23, so I was still developing as an individual and I’ve been growing in this sport, learning a little bit more each time (I fight),” said Luque, who moved back home to Brasilia and set up camp at Cerrado MMA last year after splitting time between Brazil and South Florida at the start of his career.

“I see a lot of guys that get excited when they get some wins — they get taken with that and feel that they made it,” he added. “For me, that is something where I was able to realize the work is never done until you retire.

“Until I retire, I haven’t reached my full potential, so it’s always about working more, working hard and trying to get as far as I can go. I want to be the best Vicente Luque I can be.”

Over his last three fights, it has been obvious that Luque is progressing towards that goal.

First came a second-round submission win over Niko Price, a dangerous finisher in his own right who was coming off a stoppage win over Alan Jouban and had yet to taste defeat inside the Octagon. He followed that up by knocking out Chad Laprise in Santiago, Chile, catching the Canadian veteran with a left hook in tight as they traded shots four minutes into the fight.

Last time out, Luque put his chin on display as well, absorbing a spinning back elbow from Jalin Turner like it was nothing in order to land a clubbing right hand that put the 23-year-old prospect on the canvas and kicked off the finishing sequence.

It was the kind of performance that Luque hoped would earn him a date with a ranked opponent — or maybe even allow him to crack the Top 15 himself — but instead, he ventures to the desert this weekend to kick off his 2019 campaign in a showdown with the unranked, but dangerous Barberena. 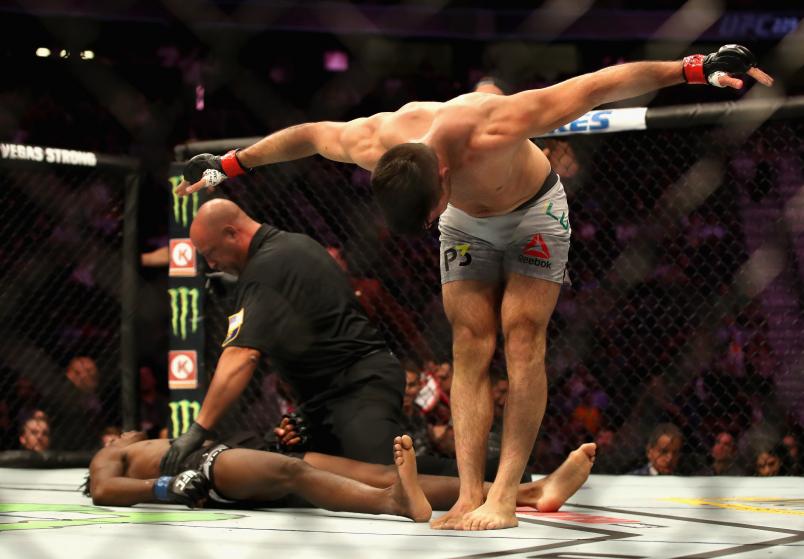 “It’s a little disappointing, but that’s not going to bother me in my training or put me back,
he said of facing the former MMA Lab product who has earned four wins and three stoppages in six appearances in the welterweight division. “It just makes me hungrier to get in the rankings, keep doing what I’m doing and beating everybody the best way I can.

“He’s a tough guy who is coming off a win over Jake Ellenberger,” Luque added in regards to Barberena. “He fought Colby Covington, who later got the interim title, so I’m happy with this opponent. I think if I get a win on Sunday night, it’s definitely going to add to my career.”

While cracking the Top 15 and getting to test himself against a ranked opponent is the immediate goal for Luque, it’s also just a smaller piece of a bigger puzzle, one that he really started working towards when he opted to make the permanent move back to Brasilia.

“The move back to Brazil and being here with my team at Cerrado MMA was a big change for me because not only do I have the tactical training — the actual fight training — but I also have a whole team behind me,” began Luque. “I’ve got my psychologist over here, my strength and conditioning, my physical therapy and I have felt all year that I’m ready to go whenever they call me and that’s a big thing.

“I don’t feel like I’m doing specific camps for each fight — I feel like I’m always in a camp, so I’m always ready and that has been showing in my fights. Each fight, I think I’m getting better, making improvements. I’m stronger, faster and I’m more skilled and the plan is to keep on doing that.”

The burgeoning contender credits his work with his psychologist, Luciana Castelo Branco, for helping him remain focused on the bigger picture, regardless of the outcome inside the Octagon.

“She has worked with me in a lot of different areas, but specifically on keeping a good mindset regardless of if you win or lose, if you have a fight or you don’t,” he explained. “The goal is always to be a champion and my mindset always stays the same.

“If I win, I’m happy for that, but it’s back to the gym, keep working hard because I’m far from what my objective is, which is to be a champion.”

First up is this weekend’s fight with Barberena, which is not only crucial in helping Luque cross off the smaller goal of landing a fight against a ranked opponent, but also the initial appearance in what he hopes will be a busy 2019 that ultimately ends with him occupying a spot in the Top 10.

“The plan is to fight at least three times and if I can, I’d like to fight four times this year,” said Luque. “At the end of 2019, my objective is to be a Top 10 welterweight and this is one more step (towards that goal).

“Nobody has done that with him (in the UFC) and I believe I’m the guy that can do that for sure.”