"I know that the way for me might be a little bit longer, but I have no problem with that because I enjoy fighting."
By Thomas Gerbasi, on Twitter: @TGerbasi • Oct. 31, 2019

While Nate Diaz and Jorge Masvidal battle it out for the BMF belt in the main event of UFC 244 this weekend, it wouldn’t be a bad thing if the other two welterweights on the main card – Vicente Luque and Stephen Thompson had their own belt to fight for as two of the nicest folks in all of sports.

Call it the NMF belt.

“That would be great,” laughs Luque. “He (Thompson) is a super nice guy. I’ve always watched his fights, even before I imagined fighting him, and he’s always been a good example, so now being able to fight him is an honor, and I definitely think that title makes sense also.”

At this point, you might assume that the 27-year-old Brazilian would take any kind of belt after putting together a six-fight winning streak in the 170-pound shark tank that includes five finishes and two Fight of the Night bonuses. But when it comes to title shots, “The Silent Assassin” is living up to his nickname.

“My goal is always to be a champion, and step by step I’m getting closer,” he said. “And I get it, I’m not the kind of guy that talks a lot of stuff and calls people out. I try to be respectful; it’s what I’ve learned all my life and I know that the way for me might be a little bit longer, but I have no problem with that because I enjoy fighting, I enjoy training and at the same time, a six-fight winning streak is solid proof that I’m a top contender.”

There is no question about that, and getting to fight a former world title challenger like Thompson on the main card of one of the biggest events of the year is a sign that good things like title shots are getting closer. And it doesn’t hurt that he’s getting this opportunity in a building he made quite an impression in the first time he was there. But don’t think he’s being superstitious about fighting in Madison Square Garden.

“I’m not the kinda guy that’s always looking for superstitions, but if it’s in my favor, I’ll take it,” laughs Luque, who knocked out Belal Muhammad in 79 seconds on the UFC 205 card in November 2016. “It was a great night – UFC 205 was one of the biggest events of all-time, the first time in New York and Madison Square Garden. Everybody wants to fight there and I had the opportunity to fight there the first time ever and I got a great knockout. I intend to repeat that and I think it’s gonna be a good night November 2nd.”

Luque knows all about good nights in the Octagon, as he’s had plenty of them since he signed with the UFC in 2015. But let’s not forget that at one time, Luque was just 7-5-1 as a pro following his Octagon debut loss to Michael Graves. At that time, no one was touting him as a future champion, but he always believed. More importantly, he was willing to work as hard as it took to reach his goals. 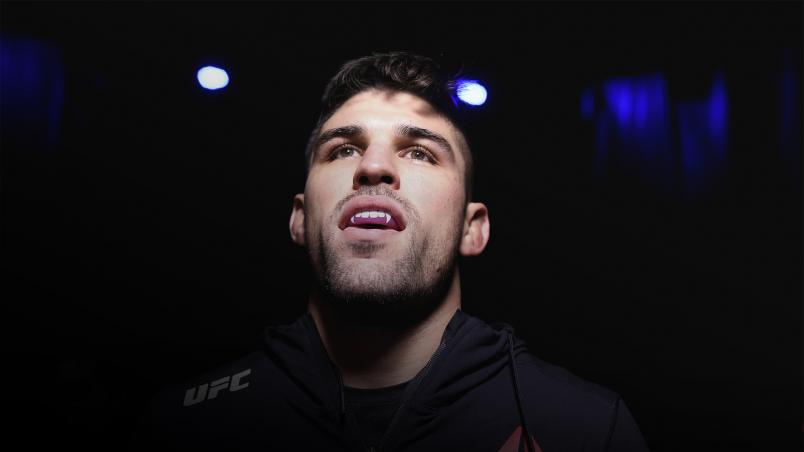 “I think my career has always been like that,” Luque said. “I started really young and I had many plans as a young fighter. I planned to get to the UFC at the youngest age and maybe be the youngest champion, and I don’t have a chance to do any of that anymore. But I understood that everyone has their path. I don’t believe when I started that I was the most talented, but I definitely was the hardest working and the one that wanted to get to these dreams the most. And I think that’s what’s going to be my legacy. I’m gonna show people that it doesn’t matter if you’re the most talented or if you’re the guy who’s gonna get there quick. But if you keep pursuing your goal, keep working and be persistent, eventually you’re gonna get it. Nobody can stop you.”

Few have been able to stop Luque in recent years. In fact, no one has beaten him since Leon Edwards decisioned him in March 2017. In other words, this isn’t the same fighter he was back in those early UFC days. Today, if you put the words Vicente Luque and world champion in the same sentence, no one blinks. But one thing has never changed in Luque’s repertoire, and he says it never will.

“I’ve always been an aggressive fighter,” he said. “I’m intelligent, I’m technical, but whenever I see an opportunity, I’ll go after it. I’m not afraid to risk losing a position to try to submit somebody, I’m gonna try to knock my opponent out, and it’s always been like that. It’s my style and I like people to enjoy my fights. I don’t imagine myself trying to make a fight super safe and super boring. It’s not my way.”