Read on for the latest installment in UFC.com's weekly series of articles on proper nutrition from the top athletes in the UFC...this week, former light heavyweight champ Forrest Griffin 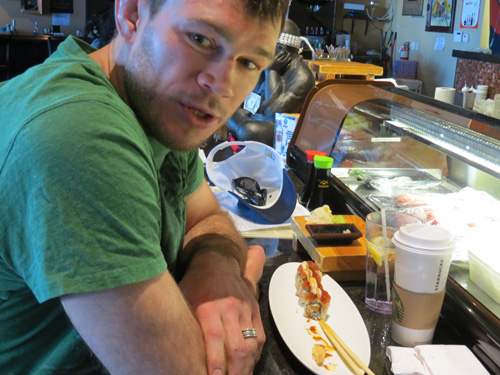 It is 3:30 p.m. on a sunny afternoon in Las Vegas and Forrest Griffin has discreetly settled into a popular sushi restaurant. Tipping the scales at 226 pounds, he gulps down 20 or so pieces of sushi – salmon, yellowtail salmon, eel and tuna. He adds a large salad for good measure and washes it down with his favorite beverage of all-time: a 16-ounce coffee. “This will be my biggest meal of the day,” he says, though he hints he may have overdone it given that within an hour he will begin lacing up for another evening MMA sparring session. A politically astute man of many opinions and diverse interests far beyond MMA (he’s written two New York Times bestselling books, after all), the former UFC champ was kind enough to let me tag along and quiz him on the diet behind one of the sport’s most well-conditioned cardio machines.

Curreri: You said you were 226 this morning. It’s interesting because you’re a big light heavyweight and could fight some at heavyweight if you chose to.

Griffin: Yeah, I had six or seven fights at heavyweight. Light heavyweight is a deeper weight class but there are two problems: One, I don’t have the pop, the power. Two, I no longer have a heavyweight chin. You know, I get the best of Roy Nelson 70 percent of the time. But that other 30 percent of the time – same with Frank Mir – with these little gloves, I just can’t take their shots. The other thing is, when Roy gets on top of you the world feels like it’s ending. So heavyweights are not fun.

Curreri: How long have you been conscientious about your diet? Did it start with being a pro fighter?

Griffin: No. I was one of those guys, I remember growing up in high school and I would eat a can of tuna every day after fourth period. And then in college I tried to play football (at the University of Georgia). I would keep a notebook and try to eat 6,000 CLEAN calories a day. Do you know how hard that is to eat 6,000 CLEAN calories a day? It’s hard. I was working out 2 to 3 hours a day, lifting, running, sprinting. At that time I had such a high metabolism. I was reading all the bodybuilding magazines and stuff. I was on the practice squad and stuff but I just realized that no matter how hard I tried I just wasn’t as talented as those guys.

Curreri: You played defensive end in high school. How big were you?

Curreri: Can you still dunk a basketball?

Griffin: It’s sad. It took me three tries last time but I did it. One-handed.

I remember eating cake (years ago) and I remember thinking, ‘When was the last time I had anything with this much sugar in it?’ And it had been over two years. So I was eating super-clean even in my early 20s.

Curreri: You’ve got so many different diets out there today: Vegan, Paleo, High protein/low carb, etc..Does your diet relate closely to any popular diet in particular?

Griffin: I kind of make up my own diet. I was talking about that the other day … the less steps between you and your food the better. I still eat processed foods, but I try not to. So I eat organic most of the time. I notice, too, that the more sugar I eat the more often I get sick. And that just stands to reason: you’re making your body more acidic. I’m a big believer in the Paleo diet, I just don’t have the discipline for it.

My wife and I buy expensive meat and expensive veggies. And I’m telling you, I bought some organic kale and the last little bit of it went bad. I was pissed. ‘Man, it was six bucks for that kale! We’re just throwing money away!’ I drink green drinks, throw some spinach in there. I don’t TRY to eat healthy, I ENJOY eating healthy. But I also want to eat unhealthy, too, you know?

I usually supplement with a lot of protein shakes. So I eat 5 to 7 times a day. I eat a lot of food. But I’m lucky because I really enjoy working out. I always have. I don’t care what it is but I’ve got to do something for a couple of hours.

Curreri: If we were to peer into the Griffin home refrigerator right now, what would be in there?

Griffin: There’s coconut milk, vegetables, tons of spinach, Greek yogurt unsweetened that my wife makes dip with. Tons of good stuff. Avocado, homemade guacamole. I actually eat out more than I’d like to. The old standby for me is Jason’s Deli. I’ll get a salad or a wrap. I won’t eat cheese or anything fried. I don’t touch fast food. The pink slime and that kind of stuff, we have no concern because we’re never eating that stuff. I don’t drink fruit juices or do juicing, either. If sugar is bad, then why is lots of sugar in juice good? If I’m going to eat something bad, (screw) it, I’ll eat Ben & Jerry’s or cake. No processed cookie crap.

High acidity causes more wear and tear on your body, and perhaps, this is what Randy (Couture) used to say, more lactic acid in your muscles. Refined sugar is poison. We all know that. Anything that tastes really good is really bad for you.

The older you are as a fighter, the more diet plays a part because you need all the help you can get. But you can’t eat foods, alcohol or stuff that breaks you down further. You are what you eat. And unfortunately, you are what your food eats.

I remember when my mom used to buy liver. You can’t buy liver anymore! It’s so shot out because of all the hormones, steroids and antibiotics that destroy an animal’s liver. So you wouldn’t want to eat that. I’m super fortunate because my wife’s family are big hunters. So I’ve got a freezer full of boar, venison, a freezer full of good game. But it’s fresh meat. A deer will not willfully sit in another deer’s s---. Cows don’t have a choice.

Curreri: Do you cook?

Griffin: It’s funny you ask. I actually cook the same thing every day. I cook two or three pounds of ground lean organic turkey or chicken, then I put broccoli or spinach slaw and that’s dinner every night. I might put some olive oil, balsamic vinaigrette. I also might put some barbeque sauce or hot sauce. I eat a lot of hot sauce and it’s great because it doesn’t have a lot of calories. But never use hot sauce before a workout. I get the worst indigestion if I do that. I’ll be on fire.

We pretty much buy everything organic from Whole Foods or Trader Joe’s. The diet that I eat, over time you might notice that you get sick less and feel less tired. But it’s not an overnight thing.

Curreri: Tell me about your diet growing up.

Griffin: My mom was a hippie and looking back that was cool because we
always ate healthy. It was just me and my mom and we didn’t have a lot
of money. We ate a lot of stews and ghouloshes, stuff that at the time I
hated. But looking back they were actually pretty healthy. I remember
on weekends we would eat Breyers ice cream. My mom was really into not
taking Aspartame, not taking BPA, things like that.

Curreri: I would be remiss if we didn’t talk about your extraordinary coffee consumption, up to 14 cups of coffee a day. A certified coffee addict. Is caffeine ever an issue for a pro fighter?

Griffin: Caffeine obviously beats your system up, it causes you to get sick more, and it causes you to break down more. Anything that gets you going will be by nature catabolic and cause you to break down more at some point. That being said, I just love coffee. I’m never going to NOT take in caffeine. I just don’t take any caffeine after 4 p.m. and I don’t usually have any trouble sleeping. I just started drinking coffee my freshman year in college. There are a lot of papers that wouldn’t have gotten written if not for coffee.

Curreri: Forrest Griffin the fighter minus coffee. What would that be like?

Griffin: I would be awesome. I would be so much healthier. I just would never make it to the gym!