Luke Zachrich: A Busy Man Gets His Second Shot

"This is the chance that everybody gets to see the real me. Whether I go out and put on a spectacular performance and I
win, or I fail miserably, it’s on me and I’ve had the opportunity." - Luke Zachrich 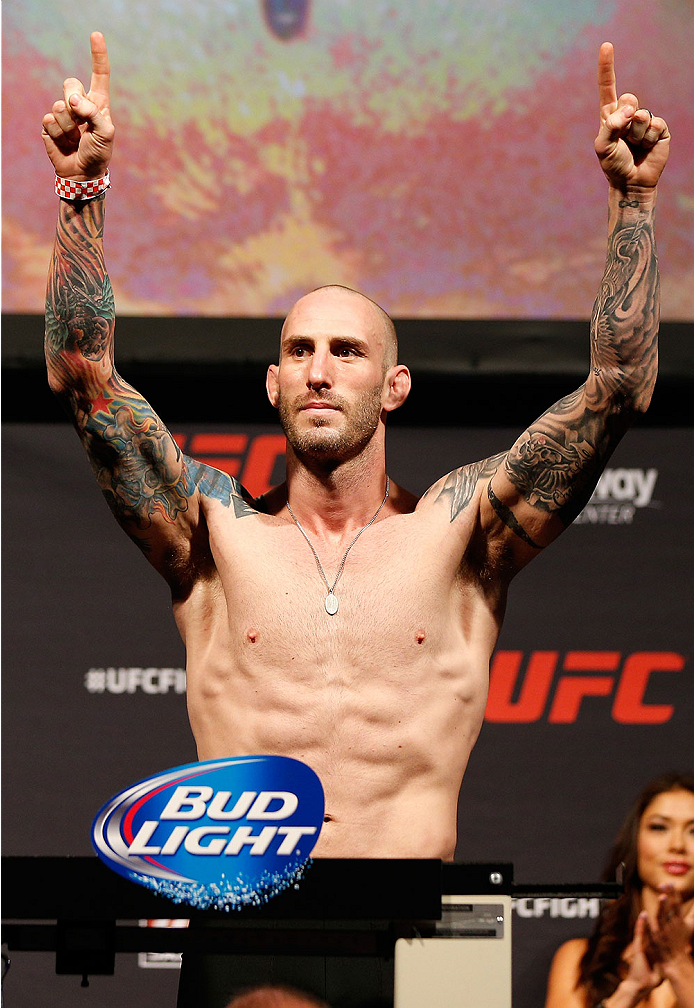 He chuckles, because today, things are quite different for the 32-year-old from Columbus, Ohio. Sure, he spends plenty of time in the gym preparing for his UFC 175 bout against Guilherme Vasconcelos this Saturday, but he also owns a gym, along with two restaurants (a third should open later this summer), and he’s a married father of a daughter, with another child on the way. Some would say he’s more than made up for the lack of responsibilities in his younger days.

“It’s neat to see how my life’s changed and what I’ve got going on now, and I still have the same goals and same desire to go compete at the highest level and accomplish some goals that I set for myself over ten years ago,” said Zachrich. “I’m an average person, and I’m no different than anybody else out there, but I’m so driven and I’m so thankful for the opportunity to fight here.”

If anyone has paid his dues to get that opportunity, it’s Zachrich, a member of Team Forrest on season seven of The Ultimate Fighter in 2008. But unlike several of his castmates, including Amir Sadollah, Matt Brown, and CB Dollaway, his opportunity to compete in the Octagon took a lot longer.

“I came off The Ultimate Fighter, I strung three fights together really quick and I thought I was gonna get back,” he said. “It didn’t happen.”

After those three wins in 2008-09, Zachrich got submitted in a 2010 bout by Eric Schambari, and a two-year layoff due to a back injury followed. When he returned in 2012, he was still cautiously optimistic, but when three more wins on the local circuit didn’t produce any call from the UFC, he wondered whether he was wasting his time.

“I got to the point where after I came off the two-year layoff from the back injury, I didn’t know,” he said. “I thought if I got one or two fights, maybe three, that I could get back within a year, but it was really tough to get the fights. And once I got my three fights and it wasn’t happening, I really started debating whether I was going to stick around and continue to do this.”

In March of 2014, Zachrich won his first pro boxing match, stopping John Felty in two rounds, and he was ready to move on. Then the phone rang.

“As soon as I stopped wanting it, it happened,” he laughs, “it” being a call from the UFC to step in to face Brazil’s Caio Magalhaes on 11 days’ notice.

“I was so excited to get the call, I would have taken it on one day’s notice if I hadn’t trained in three months,” he laughs. “It didn’t make a difference. I cut a ton of weight to get down, and I actually felt really confident that I could win that fight. But it’s one of those things: you take a fight on 11 days’ notice against a guy who has been training for a long time and who was part of a very good camp, and unfortunately it didn’t go my way.”

Zachrich was stopped by Magalhaes in the first round. But he has no regrets.

“I’m fine with it,” he said. “I would have taken ten times the beating and I would have fought for five rounds and got beat up to where I couldn’t walk for three months just to get another opportunity to fight there again.”

He means it too. I joke with him and ask if the 185-pounder would have fought one of the heavyweight headliners – Fabricio Werdum or Travis Browne – that night if asked, already knowing the answer.

“I would have fought anybody they threw at me and I would have given my best just to get the opportunity,” he said with all sincerity. “That’s how important it was for me just to get into the UFC. I’ve been doing this for over ten years and now I feel like it’s my time to shine and I get the right opportunity to put a full camp in and now you can see what I’m made of.”

Saturday is his time against TUF Brazil 3’s Guilherme Vasconcelos. For Zachrich, this is his real UFC debut, his opportunity to prove himself on the big stage once and for all. For those who don’t fight for a living, it’s hard to understand just what this means.

“I don’t think your every day person really understands the trials, the tribulations, the heartbreak, and everything that goes along with being a fighter,” he said. “And the UFC is the absolute pinnacle of the sport, so to be able to even set foot in the Octagon, for a guy like me, coming off The Ultimate Fighter 7, I was there at that point, and that was one of the first seasons where they didn’t have everybody come back at the finale. So for me, I feel like I want it more than a lot of the other guys do. I feel like I’ve been through more, I’ve had more ups and downs, highs and lows, and I’m a 32-year-old guy.

“This is the chance that everybody gets to see the real me,” Zachrich continues. “Whether I go out and put on a spectacular performance and I win, or I fail miserably, it’s on me and I’ve had the opportunity. There are no excuses this time. I had a great camp, I’ve got a great team around me, I’ve got fantastic family support, so this is where you’re going to see the real me.”