NEWARK, NJ, April 18 – Ronaldo “Jacare” Souza may currently be the number one middleweight contender after his Saturday co-main event win over Chris Camozzi, but come Monday, when the updated rankings are revealed, the man in line for a shot at the 185-pound belt may very well be Luke Rockhold, who dominated Lyoto Machida in the main event at Prudential Center before submitting him in the second round.
“Did you hear my walkout song?” Rockhold asked interviewer Joe Rogan after the bout. “I’m the best around. I did my part. Weidman, do your part.”
> WATCH: Luke Rockhold Octagon Interview 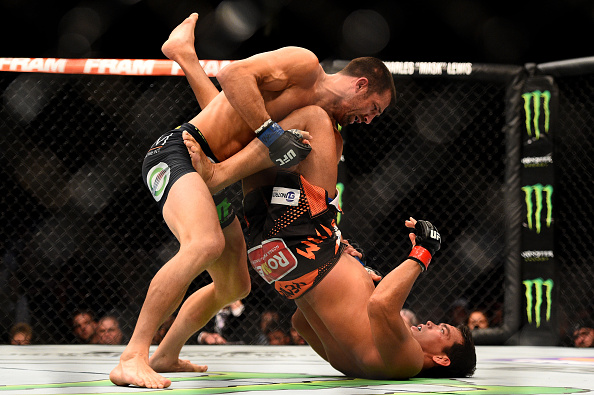 The reference was to UFC middleweight champion Chris Weidman, who faces Vitor Belfort at UFC 187 on May 23 in Las Vegas, and Rockhold made it clear that he wouldn’t mind facing the Long Islander in Madison Square Garden later this year if mixed martial arts gets sanctioned in New York. It was a defining performance for the former Strikeforce champion, who has won four straight, with none bigger than his victory over Machida, a former light heavyweight champion.

Machida connected well in the early going with his left hand, but Rockhold was unaffected by it, eventually taking the fight to the mat in the second minute, where he attempted a choke that Machida escaped from.
Rockhold kept the top position and fired elbows to the body before changing position and nearly getting the Brazilian’s back. Machida shot to his feet, but Rockhold dragged him back down, this time briefly taking his foe’s back twice in a series of scrambles. 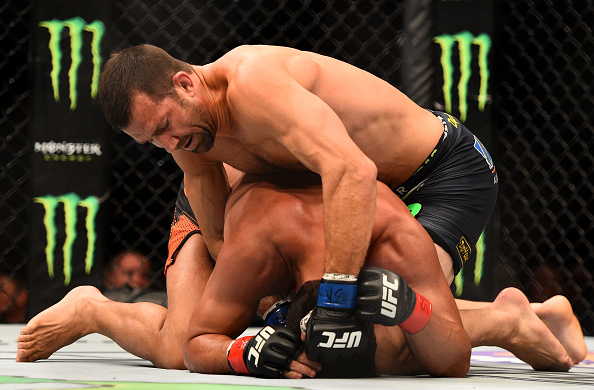 A barrage of ground strikes followed in the final minute, along with a rear naked choke attempt, but Machida was able to make it to the end of the round.
> WATCH: Dana White Backstage Interview

Rockhold confidently left his corner for the second round with his hands down, and while Machida’s face was battered, he still had to be taken seriously.
Just as in the first though, Rockhold bullied Machida to the mat, and it was back to work once more. This time, he would not be denied, as he flattened Machida out and sunk in the rear naked choke that forced Machida to tap out. The official time was 2:31.

With the win, Santa Cruz’ Rockhold, 30, ups his record to 14-2; the 36-year-old Machida falls to 22-6 after suffering only his second submission loss, the first coming against Jon Jones in 2011.