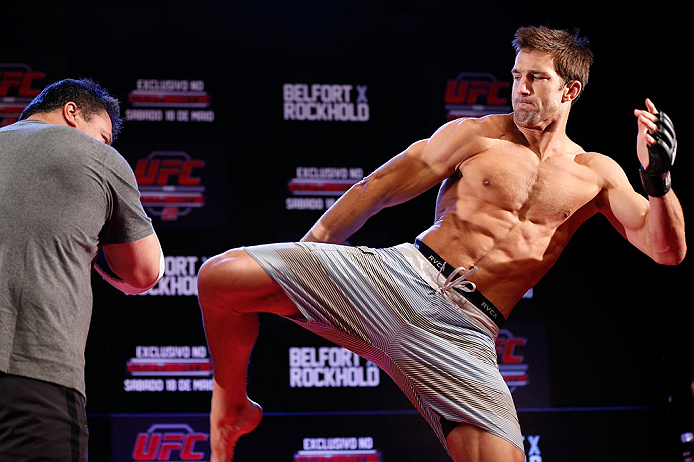 With six of his last eight wins coming by knockout, and a reputation for fistic mayhem that travels far beyond that, Vitor Belfort is not exactly the opponent you would want to face in your first UFC match. That is, unless your name is Luke Rockhold.

“I’m looking for big fights and Vitor is the perfect fight,” he said. “He’s a big name, he’s a top contender in the division, and I’m stoked to have Vitor on the plate. It (the fight) poses a lot of challenges for me, so beating him is gonna elevate me to the level I want to be at.”

Bold words, but you would expect nothing less from a man who can rightfully call himself “champion.” The last man to hold Strikeforce’s middleweight title, the 28-year-old comes to the Octagon not as a rookie hoping to secure a place in the top ten, but a legit top five 185-pounder hoping to make his case for a title shot. And in the process, he hopes to continue the run of success his brothers and sisters from Strikeforce have had in the Octagon this year.

“I think we’ve already put an exclamation point on most of our fights in the UFC so far,” he said. “All our guys have done very well. I believe that Gilbert Melendez won that fight (against Benson Henderson), and then Josh Thomson and Daniel Cormier did pretty well themselves against high caliber UFC opponents (Nate Diaz and Frank Mir, respectively). I think we got ragged on in Strikeforce for being there, and people thought that we weren’t equals or something to the UFC guys. Obviously I want to go in there and chalk one up and win for Strikeforce, but I also want to get this behind me and I just want to become the UFC champ. I want to be the best in the world. I feel like my belt’s on the line here and I feel like I am the champion. I’ve got a lot to lose in this fight, so I’m pumped.”

That mindset is what separates the contenders from the pretenders. Instead of worrying about facing a former world champion like Belfort in his backyard of Brazil while dealing with the first time UFC jitters as well, Rockhold is embracing the moment and eager to hear the first bell ring as he faces not just a superstar of the sport, but one of the first fighters he ever saw compete.

“He’s one of the first guys I’ve ever seen fight,” recalled Rockhold. “It was him versus Wanderlei (Silva), and I was also watching Royce (Gracie) vs Kimo, and all those old school (Ken) Shamrock and (Dan) Severn fights. I watched those as a kid and I dreamed about being a UFC fighter one day. Then I lost track of it and now it actually came to be and I’m fighting Vitor Belfort. It’s kinda surreal, but I’ve been in the game long enough that I know what I’m capable of and he’s another opponent once the cage door closes. It doesn’t matter who he is or what he’s done; I know I’m gonna beat him.”

When Belfort blitzed and beat Silva in 44 seconds back at UFC Brazil in October of 1998, Rockhold was about to celebrate his 14th birthday. A little more than 14 years later, he is about to trade punches with “The Phenom,” but he is far from star-struck.

“I’ve gotten past that,” he said. “I’ve seen the stars and I’m not really one to get star-struck. I’m confident in myself and my abilities and I’m a fighter. I just see the opponent in front of me and I don’t see Vitor Belfort; I just see a good, dangerous southpaw.”

A good, dangerous southpaw who has only lost to two people in the last six years: Anderson Silva and Jon Jones. Surrounding those defeats are wins over Michael Bisping, Rich Franklin, Matt Lindland, and Yoshihiro Akiyama, all by knockout. So when you ask Rockhold the differences between the Belfort of 1998 and the one of 2013, he doesn’t see many.

“I don’t see too much of a change, to tell you the truth,” he said. “Maybe he’s a little bit wiser, he’s kicking more, and he’s finding his range more and trying to read his opponents before he bursts. But physically he’s still got that pop and that speed.”

On Saturday, it’s Rockhold’s job to figure out how to get past his opponent’s experience and physical tools and get on with the business of securing a shot at another championship. Is it a daunting task? Of course. But after tackling a bull way back when in Costa Rica, it’s evident that this Santa Cruz, California native has seen worse than Vitor Belfort.

“Why am I worried about Vitor?” laughs Rockhold. “He ain’t no bull, he ain’t got no horns.”