"I’m not here to play second fiddle to anybody. I want to be the best, and that’s what I’m here for." - Luke Rockhold 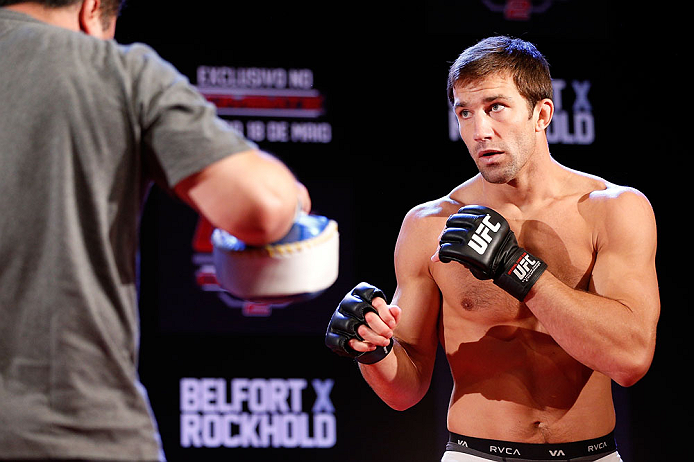 It would be easy, almost too easy, to look at Luke Rockhold, assume that he’s a California “surfer dude” and expect him to take a cavalier attitude toward his fighting career.

Those expectations would be far off the mark though, and while the former Strikeforce middleweight champion doesn’t come off as a teeth-grinding ultra-intense prizefighter, some of the comments he makes in passing peg him as one of the most serious and intense athletes in mixed martial arts.

For a test, just ask him about the layoff that followed his last fight against Vitor Belfort, a May bout in which he lost for only the second time in his nearly seven year pro career, and the first since 2007.

“It’s rough,” he said. “Obviously I wanted to get back in and get the last one behind me as soon as possible. I’m tired of hearing about it and tired of seeing it, but it is what it is. I’m just focused on what I have in front of me, I’m excited I got a fight, and I’m ready to go.”

All the usual stuff you would expect to hear in the lead-up to Rockhold’s Wednesday night main event against Costas Philippou. All except the part about him being tired of hearing about and seeing the Belfort bout. That’s a fighter with the filter off and being real about constantly being asked about the worst night of his professional life. And while the next part of the response when it comes to that topic would normally contain clichés about it being an off night or that he forgot about the loss as soon as it happened, Rockhold refuses to walk down that well-traveled road.

“I’ll be over it once I get back in there with Vitor and return the favor,” he said. “That’s when I’ll be completely over it. For the most part, it’s behind me. I got caught by a crazy kick that he’s never done, and he’s obviously opening up different parts of his game that we’ve never seen, and he keeps improving somehow. So good for him, but it’s not gonna be enough the next time we come into the cage together, I’ll tell you that.”

At the point, you’re probably not worrying whether Rockhold has bounced back mentally from the loss to Belfort. He has, and as he approaches this week’s bout with Philippou, he’s not just confident of victory, but you can tell he’s got a bit of an edge to him, which makes the talented AKA team member even more dangerous, even if there’s no animosity between him and his opponent.

“All I need is a guy across the cage trying to take from me what I’ve worked so hard for,” said Rockhold. “Once I realize that, there’s no trash talk, there’s no amp up, I just need the opponent in front of me and the cage door to close. That’s all I need. I’ll throw a couple jabs in and do what I can for the fans; this is a fight sport, and it’s built off trash talk since the beginning of time, so it’s definitely bound to happen under certain circumstances with certain fighters, but he’s a nice guy. I met him, and we were cordial, but I’ve got to fight him. He’s trying to take what’s mine, so he’s going to get his ass kicked for it.”

Going to Brazil for the Belfort fight and leaving with a loss on his record wasn’t the way Rockhold wanted to be introduced to the UFC fan base, saying “The introduction I wanted was to go into Brazil and beat Vitor Belfort’s ass in front of his home country and then enjoy taking his fans and move on and then get a title shot. That’s what I was hoping my coming out party would be.”

But in the fight game, all it takes is one off night or one perfect spinning back kick to destroy anyone’s night, and though Rockhold enters the Philippou fight with an 0-1 UFC slate, you have to assume that fight fans already know of his unbeaten nine-fight resume in Strikeforce, his wins over “Jacare” Souza, Keith Jardine, and Tim Kennedy, and his penchant for finishing fights. In other words, they’re probably not judging him on one result, even if he’s still kicking himself over it, mainly for straying from his game plan on fight night.

“I think emotionally I got invested in that fight and I took a lot with me into the cage and it got the better of me and I started straying from my game plan when I should have just kept pressing forward,” he said. “I’m a little irritated by the whole matter. The last time I did that was Tim Kennedy, and I really didn’t have it until I was in the cage. I started getting pissed off hearing (Kennedy coach) Greg Jackson yelling this and that from the corner, and everything got in my head and I didn’t fight good. I got through that fight, but you can’t do that. You just gotta focus on what your game plan was originally and shake off anything that frustrates you and try to stick to what you’re doing in your fights. Every day in day-to-day training you run into these circumstances with different training partners, and you’ve got to keep shaking it off and keep your focus and keep your game plan. And that’s what I’ve been really focused on.”

Has it been working?

“Every once in a while I think anything can get into anybody’s head,” he admits. “If you’re a true fighter, certain things will piss you off and sometimes you want to get into a mano-a-mano kind of brawl. You load up and just want to take the guy’s head off. It depends on who you’re fighting and how it goes, but it can definitely happen.”

It can, but whether it does this Wednesday or not, there’s no disputing Luke Rockhold’s status as a true fighter. And he’s coming to fight in Georgia.

“I’m pumped for this, I need to perform well, and I need to win,” he said. “I’m not used to losing. I was undefeated in Strikeforce, I was the champion, and I’m not gonna start a losing streak here in the UFC. It’s not gonna happen and I’m gonna prove myself as one of the best guys in the world and move closer to that title shot. I’m not here to play second fiddle to anybody. I want to be the best, and that’s what I’m here for.”