Luke Rockhold - A Champion Looking for a Fight 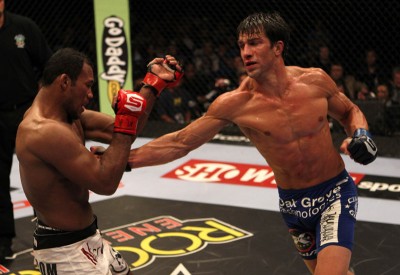 As he prepares to defend the Strikeforce middleweight title for the second time against a second opponent to come out of the vaunted Albuquerque, New Mexico-based fight camp, Rockhold hasn’t shied away from expressing his thoughts on the game plans put forward by the heralded coach or the in-fight tactics he uses to – as Rockhold sees it – help sway the judges in favor of his charges.

“It’s not what I like. I’m a fan of the sport, and those aren’t the fights that I really enjoy watching,” Rockhold said of Jackson trainee Clay Guida’s recent bout opposite Gray Maynard last month in Atlantic City, New Jersey. “I don’t want to watch those fights. I want to watch fun fights. It’s martial arts – you have to have all aspects of the game – but to some extent this is for the fans, and we have to entertain.

“We have to come with game plans, but we have to entertain (as well), so you have to be smart. It is about winning and getting that “W,” but to me, I want the crowd on my side and the excitement, and that kind of kills a little bit of that for me. I want to entertain. I want to make everybody around me have fun.”

It’s not just the strategies employed by some of the members of the Jackson-Winkeljohn fight team that have the 27-year-old American Kickboxing Academy representative riled up either. During the media conference call for Saturday’s bout with Tim Kennedy, Rockhold expressed his frustrations with the way Jackson shouts praise for his pupils after everything they do throughout the round.

If you’ve ever watched a Jackson-trained fighter in the cage, you know exactly what Rockhold is talking about, and as far as the Strikeforce middleweight champion is concerned, it’s more for the benefit of the judges scoring the fight than the fighter in the cage.

“It’s something I noticed a long time ago, and I’ve just been kind of dwelling on it,” admitted Rockhold, who pushed his record to 9-1 with a first-round technical knockout victory over Keith Jardine in his first title defense back in January. “I found an opportunity (on the conference call) to let it go and talk about it. It’s just really annoying that he has to try to play that game.

“Judges are easily manipulated these days – they’re not that aware – and I’ve just noticed that when one of his fighters land a combination or doesn’t even land a combination, he’s still yelling, ‘Great job! Amazing kicks! Amazing punch!’ It’s really kind of annoying to listen to. I think it’s a tactic – it obviously works for their camp; the proof is in their record, but… it is what it is. It just gets under my skin. It’s annoying.

“It’s hard to say how much impact it has because I’m not a judge,” Rockhold continued. “I’m not watching their scorecards as Greg Jackson is yelling out those comments, but it’s just annoying and it’s something that… it’s just ridiculous. It doesn’t matter to me (though) – I’m going to win this fight. It doesn’t matter what Greg Jackson does. It just gives me that much more satisfaction to overcome those people; overcome those little cheats.”

“Those little cheats” would be Jackson and Tim Kennedy, the former Army Ranger who squares off with Rockhold on Saturday night at the Rose Garden in Portland, Oregon. Though he’s out to stop Kennedy in the main event of Saturday’s card in the home of the NBA’s Portland Trailblazers, Rockhold has a shared frustration with the former Army Ranger who has put his military service on hold to pursue his MMA career full-time for the time being.

Rockhold has spoken candidly about his belief that he and other members of the Strikeforce roster don’t get the respect and recognition they deserve in the rankings, a sentiment that has been echoed by his opponent several times in the past. Because of the UFC’s standing as the premier destination for the top talent in the sport, Rockhold feels that he and his fellow Strikeforce competitors consistently fly under the radar with fight fans, and believes it will remain that way until they’re given the opportunity to prove themselves against their most established, more well-known counterparts in the UFC’s 185-pound ranks.

“We’re never really going to get that respect until we get some crossover. I’m fully aware of what I can do, and how I can compete with the best in the world. I train with one of the best camps in the world, so UFC fighters, Strikeforce fighters – I know where I stand.

“The rankings don’t tell a true tale, so we’ll see; we’ll see what the future holds. I think it’s out there – there’s a possibility of it happening – I just hope they can make it happen.

“I’ve got to keep winning. I’ve got a tough opponent ahead of me, and I’m looking to make a statement this fight, and I’m going to show a lot of new things, a lot of improvements, and the more I show, the better I get, they can’t deny me those fights, so I’m just going to do what I have to do.”

Right now, that means pushing his winning streak to nine with a win this weekend. Kennedy’s only loss since debuting with Strikeforce three years ago was a unanimous decision defeat to Ronaldo “Jacare” Souza in a bout for the then-vacant middleweight title in August 2010. He has since earned back-to-back wins over veterans Melvin Manhoef and Robbie Lawler to once again put himself in position to challenge for the title.

Though his win over Lawler last summer was just the second time out of 14 wins that he’d earned a victory by way of decision, Rockhold believes that Kennedy will be content to try and turn Saturday’s championship contest into a wrestling match. That’s not the type of fight Rockhold wants, but he’s ready for it nonetheless.

“He says he’s going to fight, but I think he’s going to be more of a wrestler; I think that’s the avenue he’s shown a lot. I think in the standup realm, I think I can control that realm, and I’ve got to just…”

Rockhold sighs. He seems frustrated, but it’s not exactly clear what has put him in this state.

“I’ve got to let myself go,” he finally added. “My takedown defense is – I can get up, I can do it all. If Tim plays that game, it’s just not a game you can keep up for five rounds. I’m not going to let him. You’re going to gas out. You can’t keep trying to take a guy down and wrestle him for five rounds, especially the way I’m going to keep getting up, keeping the pressure on; it takes a lot out of you. He’s going to have to adjust. He’s going to have to adapt, and I’m going to try to catch him on the way in, and catch him early.”

The root of Rockhold’s frustration becomes apparent as he continued his assessment of how he sees Saturday’s contest playing out in the cage.

“I’m not going to lie: this could be an annoying fight for me; not so much for the fans. I’m going to keep coming, and keep it exciting. If I have to keep stuffing takedowns and keep trying to catch him on my way in, it’s what I’m going to have to do, but he’s not safe, no matter what.”

Eager to make an impression, Rockhold plans on doing everything he can to earn another finish on Saturday night, regardless of how Kennedy approaches things inside the cage.

“If he tries to get inside, I’m going to be on his neck. I feel very confident in my jiu-jitsu. I didn’t want to play as much with it versus a guy like “Jacare,” but I feel like my jiu-jitsu is at the top of the game, and I’ll be on his neck if he gets in, and I’ll be throwing knees and uppercuts trying to knock him out on the way in.

“He’s going to be in danger no matter what he does. I’m just going to keep going until that final bell sounds or he’s sleeping on the ground.”