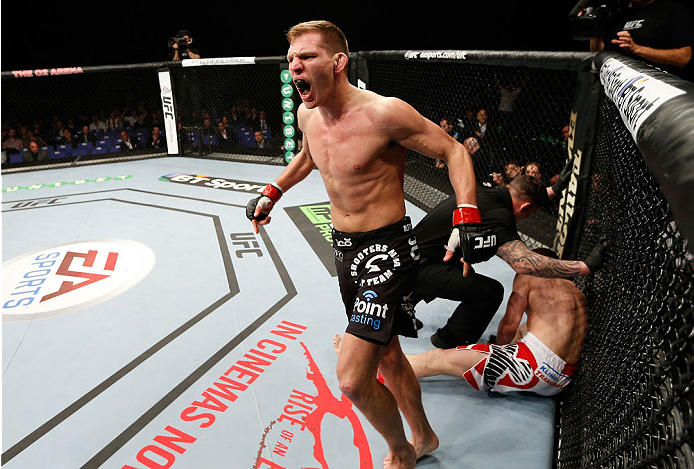 Call it tough love, but British middleweight prospect Luke Barnatt gets a daily reminder of the realities of mixed martial arts in the Tsunami Gym in Cambridge.

“We say in my gym that if you get to 10-0 in mixed martial arts, you’re fighting the wrong people,” said Barnatt.

Heading into his Saturday bout in Berlin against Sean Strickland, the record of “The Bigslow” sits at 8-0.

It’s the perfect lead-in to one of those matchups that you see all too rarely in boxing these days: a clash between two unbeaten hot prospects looking to take things to the next level.

California’s Strickland is the new kid on the block, coming in on short notice in March to impressively win his UFC debut over Bubba McDaniel. Barnatt is the brash Brit who has eagerly taken the responsibility of moving UK MMA forward in the tradition of Michael Bisping and Dan Hardy, and he’s not shy when it comes to talking about that subject.

“It’s getting there,” he said. “I wouldn’t say it’s here yet; I think this is really the beginning of it. You know I want to fly the flag high and grow the sport for England. I think Bisping’s done a very, very good job so far, but it’s in a different place now and I think I’m the person to take it to that next level. I’m here in England all the time, and I think I’m getting there. I think a win over Sean solidifies me as the guy, but I’m starting to feel like the fans, the UFC, and everyone are starting to appreciate that I could be the guy. I’ve planted the seed in their head and they’re really thinking about it, but I’m not sure if they believe it as much as I do yet.”

Believing it is half the battle, the rest is performing to a level where other people get on board as well, and Barnatt has yet to disappoint. A raw talent coming off season 17 of The Ultimate Fighter, the 26-year-old has won three times in the Octagon, decisioning Collin Hart, submitting Andrew Craig in a Fight of the Night battle, and knocking out Mats Nilsson. The win over Craig was the most telling, as Barnatt told anyone that would listen before the fight that he thought the UFC was throwing him to the wolves to see if he could survive against a respected opponent. He did. Now he believes the roles are reversed against Strickland.

“I think they’re feeding him to the wolves,” said Barnatt. “They’ve seen a guy that could be pretty good, he’s undefeated, 14-0, comes in on late notice and beats a guy pretty impressively, and now they’re thinking ‘can he really handle it?’ and they’re feeding him to me this time. I think I’m the wolf in this fight and he’s getting fed to me and I’ve got to make sure I don’t make the same mistakes that Andrew Craig did.”

So how does that wolf stay hungry?

“I’m not a huge favorite, but staying hungry is all about the bigger picture,” he explains. “It’s not just about this fight; it’s about achieving bigger things than just winning a fight. With me wanting to carry the nation and fly the flag high, I’ve got big ambitions in this sport and I want to do big things, and this is just a fight I need to get past to do that. If I lose this fight, I go backwards ten steps, so I’ve got a lot riding on me for the fight. Pressure’s the wrong word, but I have a lot of motivation to win and win impressively. It’s not proving myself as if I belong in the UFC, I feel like I’ve done that already. But I’ve got other ambitions now and bigger things to do.”

Those bigger things don’t come without taking care of the small details though, and every day in the gym, Barnatt has become an expert in being the nail and not the hammer. Yet don’t judge him on what happens in Cambridge; judge him when it matters – on fight night.

“Put me in a gym situation, I bring guys in and I train with them and they destroy me,” he said. “I lose every single day in the gym. So failure is something I’m used to. I fail a lot in life, but just not on the big stage, and that’s what I’m preparing for. I’m used to failing and I get through it every single day, and if it happens on the big stage, I’ll get through it; it’s just a part of life. But if you don’t try to take it to the next step and don’t try and fight those people that are above you, you’re not pushing yourself to the next level. I’m working continuously on improving my game and getting better and there are lots of people out there that are better than me. But putting it all together and performing on the night, I think I’m one of the best in the world.”

He hasn’t done anything yet to disprove that notion, and having not just the size and skill to succeed, but the mindset that on fight night he will be the better man has made Barnatt one of the sport’s most intriguing up and comers. But don’t call him the Next Big Thing; calling him a winner will suffice as he tries to get past that 10-0 barrier and beyond.

“I’ve been tricking fate my entire career and I’ve never been the guy that people have picked to win,” he said. “In the gym I’m not a beast, I’m not throwing people around; I’m the uncoordinated, lanky, skinny kid who gets beat up every day. But then when you put me under the lights and say this is game time now, I change into a completely different person. From the moment I step into Germany, I’m a winner.