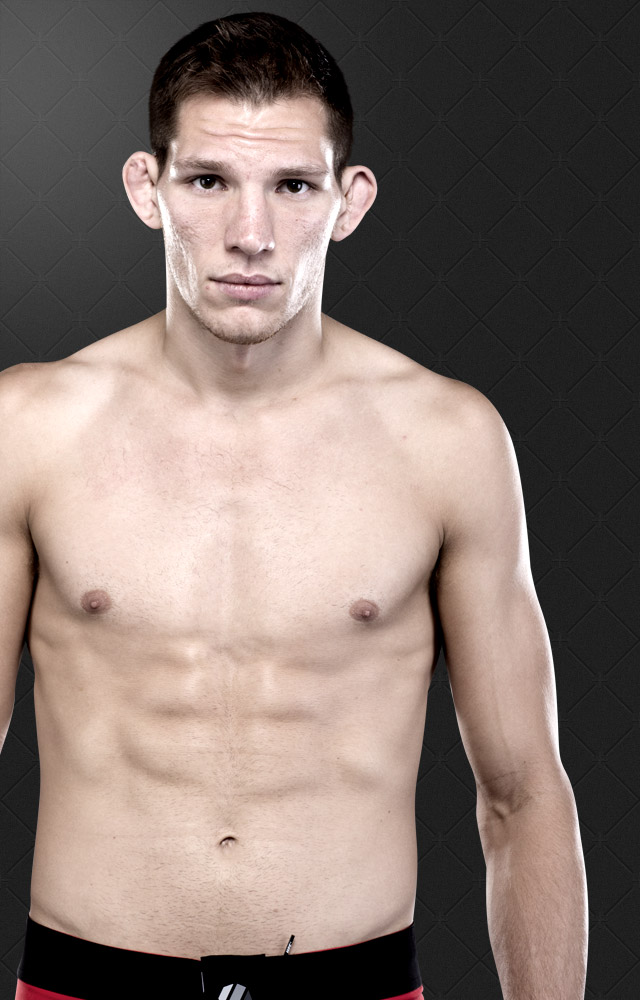 As a six-foot-six middleweight, Luke Barnatt will never get lost in the crowd, but what will likely put him on the mixed martial arts map won’t be his height, but his fighting skill and personality, both of which were on display on season 17 of The Ultimate Fighter.

Just 5-0 entering the TUF house, the 25-year-old from Cambridge, England won fights over Nicholas Kohring and Gilbert Smith before being stopped in third round of a quarterfinal matchup against Dylan Andrews that most consider to be the best fight of a stellar season. And what’s likely the silver lining in that scenario is that the loss to Andrews doesn’t count on his still unbeaten record.

“My pride counts it,” he admits. “My pride hurts, it stings. But yeah, it was worth as much as a game of table tennis or tiddlywinks with your mates. It doesn’t mean anything. So I definitely thought of that mentally in my head, but when I watched it, my pride still stings. Getting the opportunity to fight somebody with that many fights, go almost three rounds with the guy, and have a pretty decent go at it - and I feel I did really well in the fight - it gives you more confidence than anything. I wouldn’t be able to get that opportunity outside of The Ultimate Fighter. It’s a cliché and I hate being cliché, but they say losing fights makes you stronger and you learn more from a loss than a win and all that bulls**t, but it’s good to have that experience and not have that “1” on that record. I’m still undefeated but I have gone through the mental side of losing, and that’s good.”

One of the least experienced fighters on the show, Barnatt still showed the raw talent that he hopes has been honed enough to secure him a win over castmate Collin Hart this weekend on the season finale card. A win will be a ticket to future UFC fights, yet despite being in the Octagon, he doesn’t consider himself a UFC fighter yet.

“I’m still in TUF mode,” he said in a March 28 interview. “The Ultimate Fighter is still on TV, I just got to watch myself get knocked out this week against Dylan, which was not fun, so it’s not sunk in yet. I’m fighting a guy who I was prepared to fight on the show. I went into the house prepared to fight any of the 14 guys, so although this is the UFC, I don’t feel like I’m in it yet. I’ve got to win a fight in the UFC to be in the UFC.”

If you’re starting to get the impression that Barnatt is a straight-shooter like his coach on TUF, Chael Sonnen, that would be accurate. Not surprisingly, the Brit has high praise for the future light heavyweight challenger, who he worked with in Oregon for the Hart fight.

“He can offer you anything you need to know as a fighter,” said Barnatt of Sonnen. “From the technical things like wrestling, to the mentality of how you should go into fights. But in Chael Sonnen’s words, he doesn’t play around in the fight game, he plays around in the fight business. And the fight business is 50 percent fighting and 50 percent selling fights. And the thing about calling people out is that you have one opportunity to guide yourself through your own UFC career. You don’t get to pick your fights, but you get to influence them by calling people out. If you want a fight, you call it out and you might get that fight. You might not, but if you say nothing, you’re just gonna get the next guy you’re handed. I’ve already got the name of the guy in my head that I want next. I beat Collin Hart, I want to fight Magnus Cedenblad. That’s who I want, and if I don’t get him, I’ll fight whoever, but that’s definitely the guy I want to fight.”

Bold move from the up and comer, but if you think he’s trying to be a Sonnen clone, you would be way off base. Folks like that are easily picked off from a mile away. No, Barnatt is the real deal, a young man with the gift of gab and the willingness (and talent) to back it up. Where does that ability to rip off quotables effortlessly and produce headlines come from?

“Honestly, I haven’t got a clue,” he laughs. “I’ve always been quite an outgoing guy. I used to work in the bar and restaurant industry when I was 17. I left school and I started working, so I’ve been around people for a very long time. But at school when I was growing up, I was never a very confident kid. I was never very popular or anything like that, but for some reason, ever since I started getting into a cage and beating people up, I’ve sort of started bringing out my inner thoughts. I read a lot of books and I study a lot of interesting stuff, and I like to read about how people overcome problems. I read a lot of Paulo Coelho and inspirational books about expressing yourself, and I think with my personality, I don’t want to be another one of those guys that says ‘fighting’s great, I’m just happy to have the opportunity to fight in the UFC,’ because they’re just lying. ‘I respect my opponent, blah, blah blah.’ Well, if you respect the guy you don’t want to fight the guy. And I don’t want to be that person. And I don’t know where it comes from; probably from my parents, I guess. I’ve got quite inspirational parents that have been around for a long time and have done a lot of stuff with their life, and they taught me to be who I wanted to be. And I want to be someone who people remember for being creative and interesting rather than one of those boring bastards you hear on TV every week.”

It may be why on his official UFC bio (which also contains the classic response to the question if he had any heroes:  “I always wanted to be a Mutant Ninja Hero Turtle... but my parents wouldn't let me play in the sewage.”) he doesn’t have many kind words for his opponent Hart.

"I don’t have to have any resentment toward anyone to fight them or anything like that,” he explains. “I just feel like Collin is the guy that nobody wants to watch, nobody wants to listen to, and nobody wants to watch him fight. Just from this week on Twitter and other social media, I’ve had so many people tweet me and say ‘that’s why I watch the UFC. I would pay Pay-Per-View money to watch you fight,’ and that sort of thing. I’m in this sport to sell Pay-Per-Views and entertain fans, and I want to do it with my personality and my fighting style and everything across the board. Collin, I don’t know what he wants to do. He’s just another guy who wants to be in the UFC to tell his girlfriend ‘I’m in the UFC.’ I don’t know what he wants from the sport, and I feel like I’m battling against people like this. They’re the enemy and I’m trying to stop that from happening and them taking over the sport. So I’m happy I’ve got this opponent, and I’m glad I’m taking on an uninspirational guy that’s boring as hell because it gives me time to shine.”