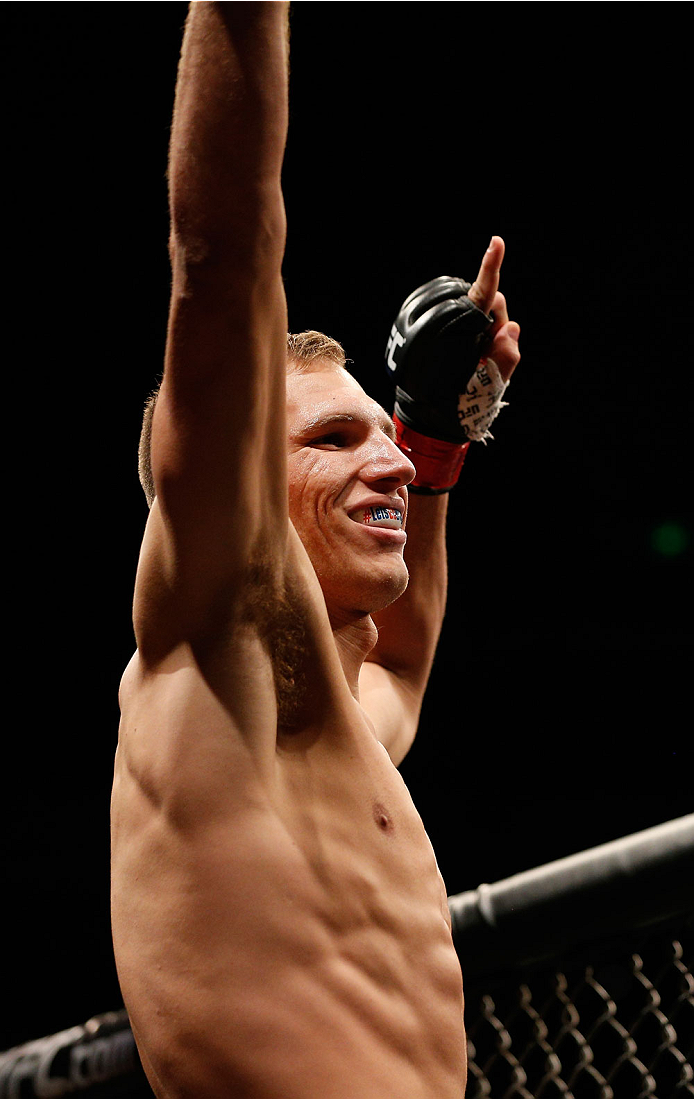 The art portion of mixed martial arts doesn’t necessarily have to do with a particular set of skills or techniques. Often, it’s all about being comfortable in the most uncomfortable of situations. And as Luke Barnatt approaches his next bout against Mark Munoz, it’s hard to think of a fighter being in a more uncomfortable spot than he will be in on Saturday.

On a two-fight losing streak in a place where three losses often results in a search for new employment, the middleweight prospect may have his immediate future on the line. So he can’t think about the possibility of losing.

But what if he wins? That’s good news, as it puts the middleweight prospect back in the win column and sets the stage for bigger fights during the rest of 2015. But at what cost? If Barnatt wins, he defeats one of the most beloved fighters of this era in his retirement fight and in the Philippines, land of his ancestry, no less.

You lose, it’s bad. You win, you could be a villain. Barnatt is aware of all the scenarios, but he’s not blinking. He’s mastered the art of being cool under pressure.

That’s one man’s take on the fight. How does one of the participants see it?

“In the great scheme of things I view it as a fight that is a rebirth for me and an end for Mark,” Barnatt says matter-of-factly. “Mark’s come to the end of his career, he’s made that decision already, it’s been on his mind for a long time, and I’m looking to make a rebirth and revive my career. I’ve had a few struggles in fights, some bad decisions gone my way and not great performances, and I need to make people realize why they should support me and why I’m in the UFC. I’m gonna do that against Mark Munoz and make a big statement and then I can move on and start getting the fights that I deserve and make people realize the talent I have.”

After an 8-0 start to his pro MMA career, two losses have done nothing to dull the confidence of the London, England native, and if you’re breaking down his split decision defeats to Sean Strickland and Roger Narvaez, you can understand why.

Against Strickland last May, Barnatt was victim of a bad decision, plain and simple. But since the Berlin bout wasn’t particularly memorable, the outrage over the verdict died down fairly quick. In the Austin matchup with Narvaez last November, Barnatt lost another close one, though this one was seen by most as a fair call. The big takeaway was that Barnatt, secure in the idea that he was going to beat two fighters that didn’t have the fairly high-profile that he did, looked like he was waiting to turn things on and take those victories. But the switch never flipped.

Now he’s in a must-win situation against a big name in Munoz, and while most would have chattering teeth at this point, Barnatt appears to be embracing what he’s up against.

“The thing that I like about this fight and about all fights is the challenge and the hype,” he said. “I don’t want to be fighting nobodies and I don’t want to be fighting people that people don’t know. I call it Kelvin Gastelum syndrome. When Kelvin went through the Ultimate Fighter, and every time he’s had a fight, he’s been the underdog and has been fighting a big name, and he’s always performed. I feel like I am like that. I perform to the task that you put in front of me. My last couple fights, I have been way better than the guys I’ve fought, and I let them get away with beating me.”

Barnatt brings up his 2013 win over Andrew Craig, in which he was placed in the underdog role yet upset the odds by submitting Craig and picking up Fight of the Night honors. A subsequent stoppage of Mats Nilsson established Barnatt as more than just “some guy” off The Ultimate Fighter, but then the hype train came to a halt with his next two fights.

Originally scheduled to return in a bout against Ultimate Fighter 17 cast mate Clint Hester in April, an injury to the “Headbussa” scrapped the fight and opened the door for Barnatt-Munoz, a development which sat just right with the Brit.

“The Clint Hester fight was a great fight for me and I was really looking forward to that,” he said. “He’s a big, athletic, scary looking dude that people are going to take notice of. He’s finished a few fights viciously, and he’s a great guy, but we were friends. So there was a strange twinge to that. When he got hurt, it was a bit of a relief. I wanted to fight, but at the same time, we’re friends, so I was glad we didn’t have to do that.”

Instead he gets Munoz, a higher-profile bout for sure, but also one with a lot more on the line. It’s a roll of the dice many fighters like, knowing that there will be either an exhilarating high or a crippling low. For Barnatt, he knows that beating Munoz would be a boost for his career but that could also hurt his standing with the fans.

“As for being a villain, it all depends on how I play it,” he said. “I’m not going there disrespecting Mark. I know he’s built a fan base in the Philippines, he’s one of the reasons the UFC is going there and it’s not like I’m going to turn up in a Floyd Mayweather t-shirt and start yelling at the Filipinos. (Laughs) Obviously I want to win, I want to win impressively, but I’m not going to try to hog the media or hog the event; the event is Mark Munoz’. It’s his retirement fight, his fans, his people, and depending on how it goes, I can be the replacement Mr. Nice Guy or I can be the villain. But my plan is to finish Mark quickly and impressively, and then hand over the mic in the cage to Mark and let him say goodbye to his people. It’s his event, not mine.”

Barnatt, who has not shied away from blunt assessments of previous foes that could be described as trash talk in some circles, gamesmanship in others, has lived up to his words in the lead-up to the fight, and frankly, how could he not when facing Munoz?

“Mark is pound-for-pound the nicest guy in the world,” Barnatt said, echoing the sentiments of everyone in the fight game. “Every time I’ve been around him and spoken to him, he’s always been nothing but nice, and the whole story he’s got, that he’s giving up mixed martial arts to be with his family and teach his kid how to wrestle, he’s the nicest guy there is. But I want my own story. You’re right, it could start a villainous story for me, but highlight reels are timeless, and it doesn’t matter what time it was, who it was or whatever, you get a highlight reel knockout against a guy in his hometown, then that’s going to be played forever. It doesn’t matter if it was his retirement fight, his first fight, whatever; they’re timeless and that’s what I’m trying to get. I’m trying to get a knockout that will be seen for the next ten years. That’s what I’m looking for in every single fight, and the situation doesn’t matter at that point.”

Suffice to say that Barnatt, while respectful of his foe, is not going to be sentimental. He can’t be. This is a fight, and he has his own future to think of. He’s made the move to San Diego to train with the Alliance MMA team, he’s getting married in a few months, and all of that could ride on the result that is produced in 15 minutes or less in Manila. And if the idea that a fighter talking of retirement has one foot out the door already, Barnatt is fine with that, as long as he puts on a performance that shows Munoz that he’s making the right call.

“I think he’s got both feet out the door,” Barnatt said. “He’s got a little finger left inside, and he literally wants to fight in the Philippines, be part of the event, do the media part and be there. I don’t think he’s taking me seriously as an opponent. And I’ve got to make it look like that. If I go three rounds and win a decision, I don’t want that. I’ve got to make it look like he did in his last fight, where he was finished early, the fight’s over, and people are saying ‘Mark’s done.’ I don’t want people to see this fight and say ‘well, maybe Mark shouldn’t retire.’ That’s the challenge in my head. I don’t see it as an easy fight. Mark has been one of the elite, one of the best in the world in his time, and he has that wrestling credential that they question in England, saying we can’t wrestle. I never fought a high-caliber wrestler, so it’s an opportunity to show the world that I can handle that and I see this fight as a golden opportunity to get me back on the right track against a big name that people care about.”

Luke Barnatt is confident. Then again, he’s always been confident, but now he feels that he has what it takes to not just believe that he’s going to win, but to translate that into a performance he’s satisfied with.

“But I really have to win,” he continues. “I’m at that breaking point where it’s a life-changing opportunity again, just like fighting to get on The Ultimate Fighter was. If I lose this fight, I might have to go back to the drawing board. I took the last two fights a little bit lightly, felt too comfortable and thought ‘oh, I’m in the UFC, everything’s going to be okay. Well now if I lose this, everything’s not going to be okay, so I really need to give the performance of my life. My life begins when I beat Mark Munoz.”