"Andrew Craig’s that big stepping stone for me that makes Joe Silva
believe I’m a true contender, that I deserve to be here and that I’ll
stick around for a little while." - Luke Barnatt 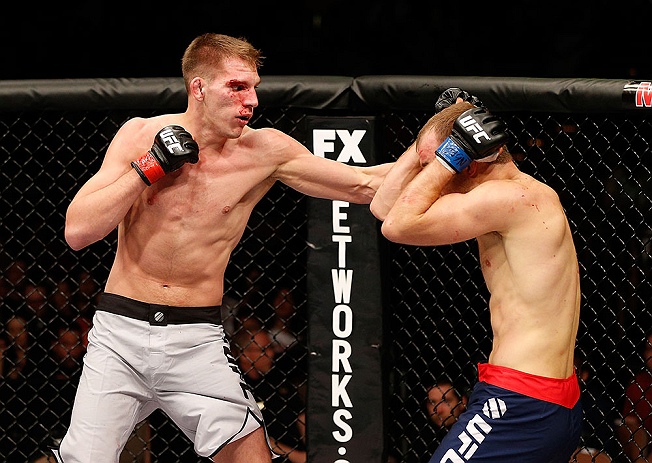 Sure, training in the United States is nice, but there’s no place like home. Just ask Cambridge’s Luke Barnatt, who returned to the Tsunami Gym to train for his Saturday meeting with Andrew Craig in Manchester and got more than a little ribbing from his teammates.

“My nickname is “The Bigslow,” and Tommy (Maguire) gave me that nickname when I first walked into the gym,” recalled Barnatt. “He was like ‘you’re big and slow.’ And he changed it now to Big Time. He said ‘You’ve been over in the States training with Chael (Sonnen), you think you’re big time now. (Laughs) So I got a hard time. Trust me, it took me the last two months to get over the fact that I’m back in England.”

Previously, Barnatt was a road warrior, making it to the quarterfinals of The Ultimate Fighter 17 in Las Vegas before staying in the States to train with his TUF 17 coach Sonnen for his UFC debut against Collin Hart in April. Barnatt won that fight to improve to 6-0 as a pro and earn another bout in the Octagon. And yeah, it’s been that kind of whirlwind for the 25-year-old middleweight, who hasn’t stopped moving – or enjoying the ride - yet.

“I definitely live in the moment and sort of float through life,” he said. “I want to train as hard as I possibly can and get all the experience in, but enjoy my time and enjoy my life and ride the cloud and enjoy what I’ve got. I won a bit of cash from The Ultimate Fighter, and I don’t have a penny left because I just spent it and enjoyed my life. I was so used to being poor and living in my gym, the UFC gave me $25,000 for getting fight of the season, and I went out and spent it. I think my quality of life has suffered because of that, but my experiences over the last year were worth it.”

Of course, with such a hectic ride from the local UK circuit to reality television to a high-profile training camp and then to the UFC, it may be hard for Barnatt, or anyone for that matter, to get a grip on everything that’s been going on. He would agree, but now that he’s had a little time since the Hart fight to let things settle, it’s all starting to sink in.

“I think at the time, obviously I was happy, but I wasn’t ecstatic about my performance,” he said of the decision win over Hart. “I was about certain points of it, but looking back at it now, it was a huge deal winning that fight. At the time, I was like, I won, I expected to win, but without it, I’d be fighting on the local scene again and life would be hard, and all the rest of it. So beating Collin was a huge deal, and it’s made me feel like I can compete in the UFC and I got used to fighting in front of the crowd and all that stuff. It was a brilliant experience.”

What may have truly made the biggest impact on Barnatt, was the realization that without winning his fight against Nicholas Kohring to earn a place in the TUF 17 house, none of what has happened since would have been possible, at least not for a few years and plenty of fights on the local scene.

“I made it into the house, I was the number one pick, I knocked out my first opponent (Gilbert Smith), and that all happened to me in a week and a half,” he said. “Then I looked at the fights to get into the house for season 18, and I was the most emotional wreck you’ve ever seen (Laughs), thinking ‘imagine if I’d lost and gone home.’ It’s been a year since I fought to get in the house for The Ultimate Fighter and in that year I was on The Ultimate Fighter, I fought in the UFC, I’ve trained with Chael Sonnen, and I’ve met all these people. It’s been a crazy year.”

So after winning his first five bouts at home, Barnatt took that major leap into the big leagues, and he hit a home run his first time out. Did he make it look easy? Well, kind of. But as he points out, the difference between life in the UFC and life outside of it comes down to more than just talent.

“The thing I can feel in the UFC is the desire from your opponent to win is so much higher,”
he said. “I hit Collin 119 times. For a middleweight to land that amount of significant strikes in three five-minute rounds is a lot. I broke his nose, I hit him solid with every shot, and there are two ways you can look at it – I can’t punch and didn’t hurt him at all, or the other guy had such a will to win that he took those shots and just coming through them. And I think it’s the second one. When I fought in England, there was one guy, I elbowed him against the cage once and dropped him and he just gave up. They’re not fighting for the same idea.”

That idea is to stay in the world’s premier MMA organization, fight and beat the best, and reap the subsequent rewards for doing so. Barnatt is no different, and he is facing a like-minded individual in Texas’ Craig, who holds a huge edge over the Brit in UFC experience and has some intangibles that don’t show up on a win-loss record.

“He’s fought some great guys and he’s got some pretty good wins on paper,” said Barnatt. But the thing that Andrew does very well is that he comes back. Every fight I’ve seen him in, he’s been losing. He’s a great athlete and he’s got good heart. Technically, I don’t think he’s brilliant and I don’t rate him as a high level guy. But he seems to have that heart to carry him through, which is very important. It’s hard to beat a guy who’s athletic and got a lot of heart.”

Yet Barnatt isn’t shivering in fear at the prospect of the upcoming bout. In fact, he fancies his chances for not just a win, but an impressive win at that, one that will keep him around these parts.

“Andrew Craig’s that big stepping stone for me that makes Joe Silva believe I’m a true contender, that I deserve to be here and that I’ll stick around for a little while,” he said. “Everyone knows that I’ve got everything else: I can talk to the media, I turn up and I fight, I’m there to fight and I train every day really, really hard. But can I compete at the top level with the top competition is the question that Joe Silva needs answering, and I think that’s what this fight is about.”