The moment came about three or four weeks ago during a sparring session. Everything was flowing, and Luis Pena was having a lot of success against a veteran who was “much, much bigger” than him to the point that he said his coaches were “turning into fans” rather than coaching. Pena found himself feeling like he was reaching another level.

Since then, Pena said he has spent the camp “trying to replicate everything” that led to that performance, and that experience has opened his eyes to exactly the type of fighter he can be.

A more fluid, dedicated and confident “Violent Bob Ross” is a scary thought and it could prove to be a reality once he steps into the Octagon on February 29 in Norfolk.

Pena admits he felt more eager to train during this camp than in the past and wonders whether a change of scenery had anything to do with it. While Pena previously trained out of American Kickboxing Academy in California, he recently moved to Florida and American Top Team, where Pena said he trained while he prepared for his pro debut. The move was blessed by his team at AKA, and it seems like it inspired a revitalized affinity to the grind.

“This whole time here, I was raring to go,” Pena said. “I was up early, cooking breakfast for myself, doing all the supplement stuff. I really made an effort this camp to truly make sure that this was going to be a successful camp for me.”

However, Pena nearly found himself without an opponent when Alex Munoz pulled out of this weekend’s fight. All was well again, though, as Steve Garcia stepped in to make his UFC debut against Pena.

While a shift in opponents might create anxiousness around the matchup, Pena remains steadfast in his preparation. He said he doesn’t feel an extra sense of urgency to dominate in the fight just because his opponent is stepping into the Octagon for the first time. He just wants to dominate, anyway.

“If you watch me fight, you know I’m going out there to throw really crazy s*** at someone and hurt them,” Pena said. “It’s not going to change for me.”

Normally, Pena said he doesn’t feel too many nerves before a fight, rather savoring the crowd’s reception when he reaches the tunnel to make the walk. That said, the Norfolk crowd features a lot of new, important faces to Pena. 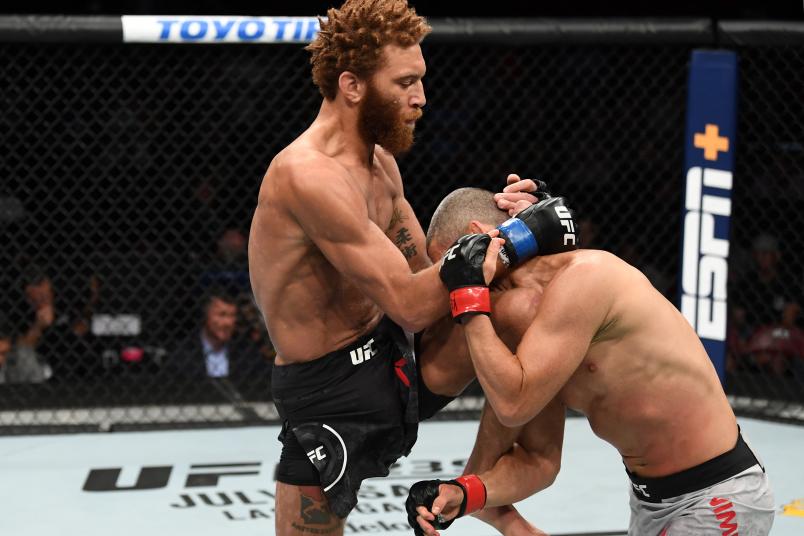 Pena’s biological father, whom he met a couple months after his UFC debut, lives in Norfolk and is a captain at the nearby Naval base, according to Pena. Accompanying him will be a “bunch of my other family,” who are going to watch and meet Pena for the first time.

“It’s not a lot of pressure,” Pena said. “But I can’t lie. It’s like I was telling my girlfriend last night, meeting my little brother, I don’t want him to think I’m lame or anything. Those are the kinds of things that are going through my mind, but I’m hoping it’s like every other fight, where by the time I get there, it’s just time to go.”

When it is time to go, Pena surely won’t have any trouble displaying the dynamic, entertaining fighting style that endears him to UFC fans. His 3-2 record is evident of a fighter looking to find consistency in himself and in his training to pay dividends (though his last fight against Matt Frevola was a razor-close split decision loss), but if his words are true, it seems like he found a new home in Florida and ATT.

Pena seemed equally excited about his upcoming fight and meeting one family member in particular: his biological younger brother. The two met at a dinner set up by his biological father, and while it didn’t go without its bumps, it was the start of a relationship Pena hopes to develop into something substantial.

He joked that if he were in his brother’s position, he’d “try everything” to poke holes and investigate whether or not having a UFC athlete as a sibling is all that cool or not. Whether or not Pena performs like prime-Anderson Silva or not in Norfolk, though, a person would be hard-pressed to not be impressed by what he brings to the table.

“I’m still going out there to do some dynamic stuff, hurt this dude and get out of there without any injuries to myself,” Pena said.