Luck of the Irish: Boston Cheers Its UFC Son

Watch the intense staredown between Conor McGregor and Jose Aldo in Boston - Click Here
And don't forget, tickets for UFC 189 go on sale Friday, March 27 and they're going to go quick - Get details 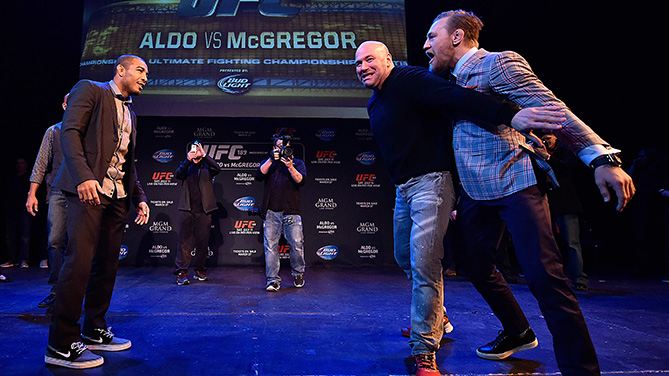 Rio de Janeiro may have been Jose Aldo’s hallowed turf on this UFC 189 World Tour, but Boston belongs to Conor McGregor. And he owned every minute of his return to New England.

The Irish featherweight star was center stage Wednesday night at The Strand Theater in Boston’s Dorchester community, a hardscrabble, diverse neighborhood that is home to many Irish Americans and a small, proud Brazilian population.

This was the perfect venue to bring Aldo, the longtime UFC featherweight champion, and McGregor, the fast-rising challenger together again on this increasingly volatile World Tour. 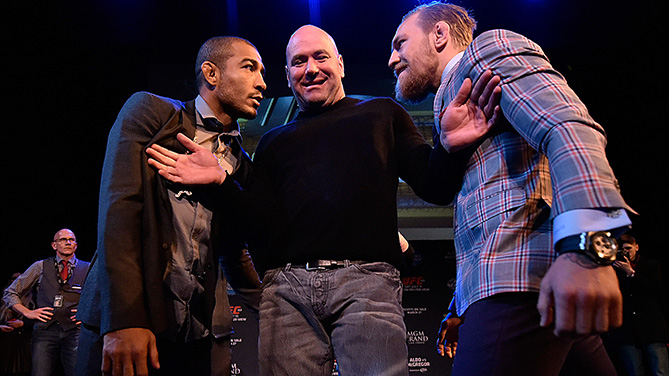 The venom that passes between these two is no joke, despite the bitter, insulting humor that McGregor often tosses out at his opponent. This is not trash talk, McGregor insists. It’s “truth talk,” as he calls it.

And this pointed, personal dialogue is all designed to rattle Aldo in advance of their UFC 189 clash on July 11 at the MGM Grand Garden Arena.

A fan at the mic, who identified himself as an Irish-American, asked McGregor: “What is it about the Irish culture that compels us to engage to ‘bust b-lls?’”

“You know, it is an Irish thing. And we will speak our mind. We don’t give a sh-t what people think!” McGregor roared into the microphone onstage at The Strand, motioning to Aldo across the stage opposite UFC President Dana White. “Wherever there is truth, we will speak it.”

Aldo’s home field advantage in Rio de Janeiro was very apparent, and he’s been the consummate gentleman away from that as the charismatic McGregor aggressively wrestled the World Tour crowds to his corner. Wednesday evening, the Brazilian belt holder maintained his poise extremely well as his challenger fired away.

White reminded the pro-McGregor crowd that Aldo is a champion of 10 years, with 18 consecutive victories and eight title defenses to his credit. McGregor has consistently discredited this, pointing out that Aldo has not won by knockout since his Aug. 3, 2013 TKO of Chan Sung June at UFC 163.

“He has not finished nobody in a long, long time,” McGregor said, spelling out his “truth” about Aldo. “He is a co-main event champion.” 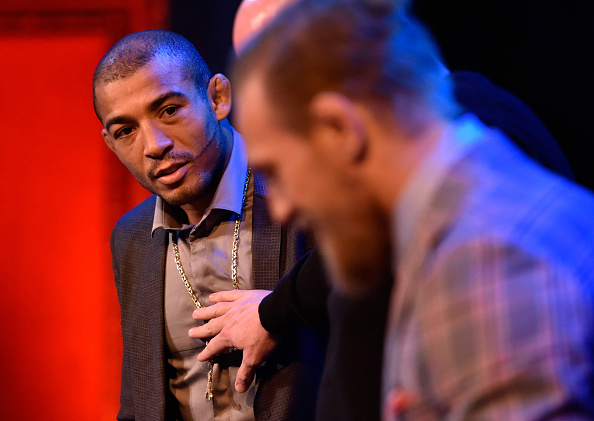 Countered Aldo, through an interpreter: “I have beaten Irish people before.

“This is MMA. Champions adapt, and I will continue to adapt to anything he does.”

Their faceoff was as tense as ever. White immediately got between the two and was straining to keep them apart. McGregor lunged forward. So did Aldo. They stepped back and paced, and their faces were etched with anger. Fans crowded near them at the foot of the stage.

Aldo is becoming more furious with each stop of this eight-city press tour. And New York City, Toronto, London and Dublin still await.

White was asked how he manages to keep Aldo and McGregor from killing each other before the fight.