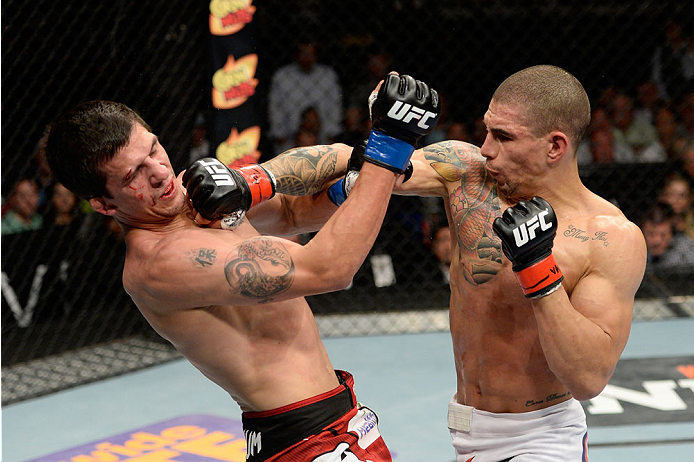 The Chute Boxe philosophy is a simple one. If you train in the style of the storied Brazilian gym, you fight to finish. It’s something ingrained in the mind and body of featherweight up and comer Lucas Martins, and he has no qualms about fighting that way, even if it could occasionally cost him on the scorecards.

“We are always looking for the KO,” he said. “We do not have ‘hold on to the fence’ classes at Chute Boxe. We train takedowns for ground-and-pound or subs; no ‘training for decisions’ classes.”

Seven months after his last bout, a three-round split decision loss to Darren Elkins, the wounds from the defeat are still raw. And while those wounds are metaphorical and not physical, as he was basically worn down under the wrestling attack of Elkins and not beat up for 15 minutes, it’s a topic that can still get the 26-year-old from Minas Gerais a little salty.

“It was very frustrating, a split decision,” Martins said. “I did a lot damage to his face and he was bleeding from several spots on his face.  He just looked to hold me to the fence, not to cause damage, not to go for a takedown, not to go for a sub.  He fights like (Floyd) Mayweather, all defense.”

When Martins was freed from Elkins’ grasp, he did get off hard shots and do damage, which means if UFC fights were scored by using the PRIDE system, the Brazilian would have picked up his fourth consecutive victory. But they’re not, and Martins’ early success ended up costing him when Elkins survived the initial onslaught and went the distance.

“I caused a lot of damage to him early in the fight,” he said.  “This was good and bad, because when I caused damage early, he really closed up his game, and all he focused on was holding me to the cage.  I train to cause damage and to get the KO.  I don't understand how a fighter can train to hold the fence for a decision.”

Coming from the mouth of some, that might be a form of pre-fight psychological warfare, a way to subliminally get an opponent to fight your fight and not stick to the more effective game plan. But when Martins speaks those words, he means them, and he will not alter what he does when he takes on Mirsad Bektic this Saturday in Goiania, even if Bektic’s best chance of winning comes from nullifying Martins’ attack with grappling and Octagon control. Bektic can bang too, though, and this is the opponent Martins hopes will show up.

“Bektic is undefeated and has fought tough guys,” Martins said. “He has a great striking game, with the confidence of an undefeated fighter.”

Martins knows what that feels like, going 12-0 before running into Edson Barboza at lightweight in 2013. “Mineiro” got his swagger back soon enough, knocking out Jeremy Larsen in a Fight of the Night battle, submitting Junior Hernandez, and then halting Alex White for a Performance of the Night bonus before the setback against Elkins. And though he didn’t have a fight scheduled for May 30, when Renato Moicano withdrew from Saturday’s bout with Bektic due to injury, Martins stepped up immediately when called.

“I am fight ready year round, and I want to keep as busy as possible,” he said. “When the UFC calls, I am always ready. They called about the short notice fight and I agreed as soon as they called. There are only difficulties when you are not training hard.  I train hard year round, so no problem.”

As a result, fight fans get a meeting between two of the top young featherweights in the sport, and whoever wins will get a kickstart toward the top of the division. The importance of the bout is not lost on Martins.

“Every win I get in the UFC is a step closer to a title shot,” he said. “I win and it gets me closer to my goal.”

“The way we train at Chute Boxe is to cause damage and get the KO,” he said. “This makes fights exciting, and I believe it’s the best training in the world.  We have guys in UFC, and a group of younger guys coming up.  At Chute Boxe, we train hard to fight easy.”