Lucas Martins: The Featherweight You Should Know

"I will be very hard to beat when I am fighting in Brazil." - Lucas Martins 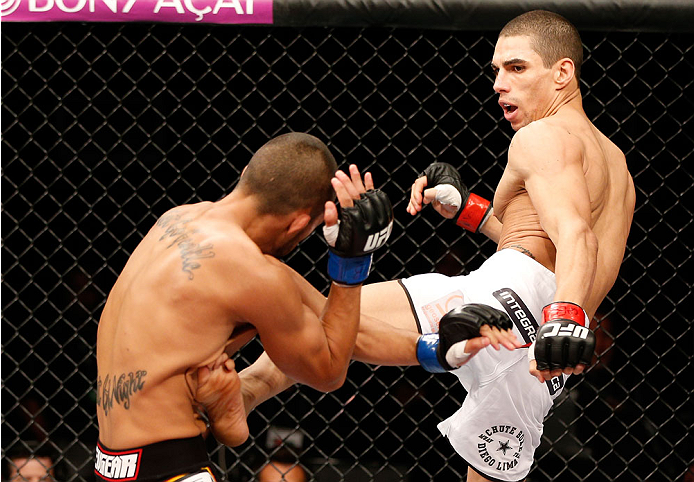 When talking about his UFC 179 bout against Darren Elkins, Lucas Martins discusses fighting in front of his home fans in Brazil, saying “I know the Brazilian fans will give me a lot of energy,” and also that “I will be very hard to beat when I am fighting in Brazil.”

On the first point, that’s a no brainer, as we’ve seen the Brazilian diehards do everything in their power to give their fighters that extra jolt on fight night. As for the second, yeah, Martins will be very hard to beat in Brazil, but as we’ve seen over the last year, the 25-year-old is going to be hard to beat anywhere.

Yet oddly enough, despite three consecutive finishes, two of them earning him post-fight bonuses, Martins has been flying under the radar on that international scene, a surprising development considering that he brings the heat on fight night every time. Maybe it’s because he’s fought in three different divisions – lightweight, bantamweight, featherweight – since his UFC debut in 2013, not giving fans enough time to see him settle into one particular weight class, or perhaps his debut loss to Edson Barboza got him off to a start that hasn’t been forgotten yet.

“Barboza had a big name at 155,” Martins recalls of the January 2013 bout that saw him stopped in the first round by the Muay Thai powerhouse. “There was a lot of talk about him being a future champion, and people know your first fight in UFC is very hard.  Now I just focus on my next opponent, fight hard, and good things happen. You always learn more from a loss then you do a win, and you see I have not lost since.”

He hasn’t, but it’s not just that the Minas Gerais native has been winning; it’s the way he’s won, knocking out Jeremy Larsen and Alex White and submitting Junior Hernandez. You can tell which fighters aren’t looking to go the distance and Martins is one of those. Not surprisingly, when you ask him where that philosophy comes from, he refers to a legendary fight team whose approach to the sport still lives on in him.

“I am from Chute Boxe,” he said. “We train to always look to finish.”

With his mindset in place and his talent obvious, the only thing left for Martins to do was find the right division for him and he believes that featherweight is home.

“I believe this is where I am best at,” Martins said. “The cut is easy for me, and I do not lose power. I get the most benefit of power and speed at 145.”

Martins may have found his optimum weight class, but with him being just 25 years old, we likely haven’t seen his best yet. We will see where he’s at in the division this weekend though, as he faces longtime contender Darren Elkins, a tough out for anyone.

“Darren has a lot of wins in the UFC and he has a lot of talent,” Martins said. “I will not be able to make any mistakes with him, and I have to make him fight my fight.”

If he’s successful and spectacular in doing that – on a Pay-Per-View main card no less, Lucas Martins’ days under the radar may be over for good.

“Sometimes it’s good when they don't see you coming,” he laughs. “This fight is a huge event in Brazil, and I am very happy to be on the main card.  I think if I make an exciting fight, more people will like the way I fight.”