She Knows London Will Cheer For Her Opponent, But She Welcomes The Challenge
By Steve Latrell, on Twitter: @TheUFSteve • Mar. 18, 2022

In any city that Luana Carolina fights, she likes to stay for a few extra days to see the sights, and London is no exception.

“Eating fish and chips,” she exclaims. “I need to do that once the fight is done. I love chips. I’m really happy to be here in London.”

Sounds delicious, but right now the English delicacy is a still a daydream as the Brazilian focuses on getting her weight down to the women’s flyweight limit for her main card contest vs Molly McCann at UFC Fight Night: Volkov vs Aspinall this Saturday.

After a couple years in a global pandemic, fighting in spectator-free buildings and confined otherwise largely to her hotel room, being in England now somehow feels like a welcome march towards a sort of normalcy.

“The energy is completely different when you fight with a crowd. So I’m really excited. Even if the crowd isn’t on my side, that’s great for the fight itself.”

The crowd at O2 Arena will most assuredly not be on her side this Saturday. Carolina is scheduled to face “Meatball” Molly McCann, the First Lady of British MMA. A crowd-favorite all across Europe, McCann’s pop when she walks out is among the biggest for any UFC fighter anywhere. But Carolina isn’t worried about who they’re rooting for, she just wants that singular electricity that only comes from a live audience. She’s used to adverse reactions, even when she fights in Brazil.

“In my last fight in Vegas, I said I wanted my next fight to be in Europe and that’s what happened,” she says excitedly. “My manager called Mick [Maynard] to talk about the matchup and they said it’d be here.”

“When I fought in Rio, the crowd was also against me because Priscila Cachoeira was the hometown fighter,” she laughs. “But having a crowd is great. It’s really different. I think that was one of my best fights. Even if the crowd isn’t on my side, at least we’ll have the fans there and that’s great.” 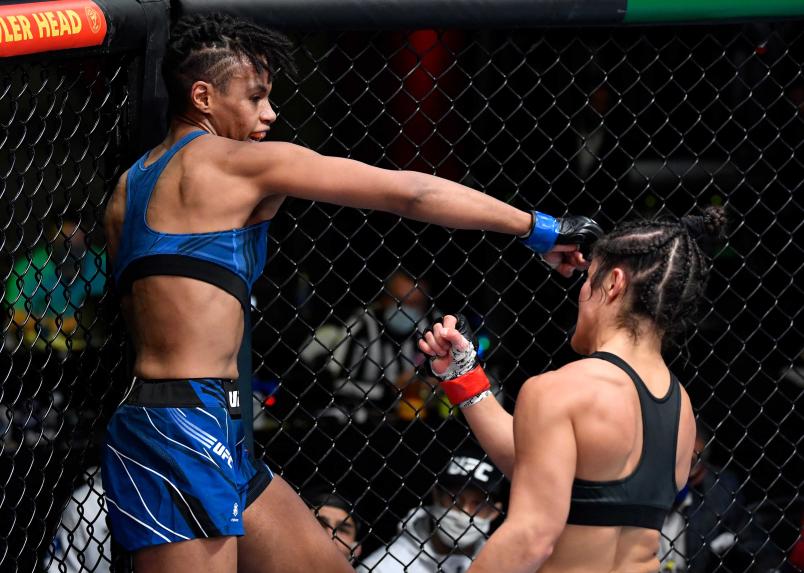 Luana Carolina of Brazil punches Loopy Godinez of Mexico in a flyweight fight during the UFC Fight Night event at UFC APEX on October 16, 2021 in Las Vegas, Nevada. (Photo by Chris Unger/Zuffa LLC)

Since punching her ticket to the UFC on Season 1 of the Brazilian version of Dana White’s Contender Series, Carolina’s lone setback was to Ariane Lipski in 2020. Since then, she has put together impressive back-to-back wins over Poliana Botelho and Lupita Godinez.

“I was finally able to get some straight wins without any injuries, put on good performances and get more comfortable in there. I’m expecting another great fight.”

On paper, McCann looks to be her toughest test to date, as well as her shot to break into the rankings. 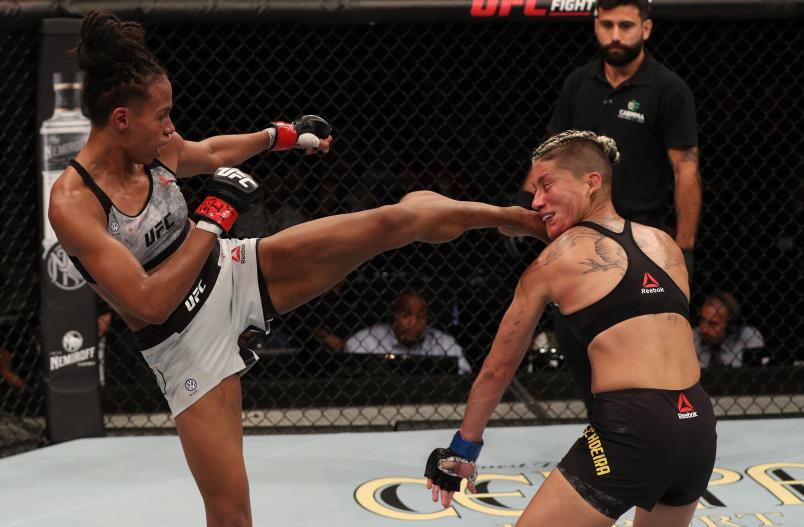 Luana Carolina of Brazil kicks Priscila Cachoeira of Brazil in their women's flyweight bout during the UFC 237 event at Jeunesse Arena on May 11, 2019 in Rio De Janeiro, Brazil. (Photo by Buda Mendes/Zuffa LLC/Zuffa LLC via Getty Images)

A win isn’t a given, however. The fiery McCann will have an arena full of Brits backing her, propelling her in-your-face style.

“I think Molly is a very aggressive fighter. She always comes forward and I think her strength is the fact that she’s unpredictable. You never know what she’ll do. She comes for the finish.”

If there’s a vulnerability to McCann’s style, Carolina thinks she may have identified it.

“As soon as the matchup was on, all her previous opponents told me that--I’ve also watched a lot of her fights because she’s fought many Brazilians and I know that’s her thing--she likes to talk and provoke you.”

This is verifiable. McCann’s in-fight trash talk is part of what makes her must-see tv. 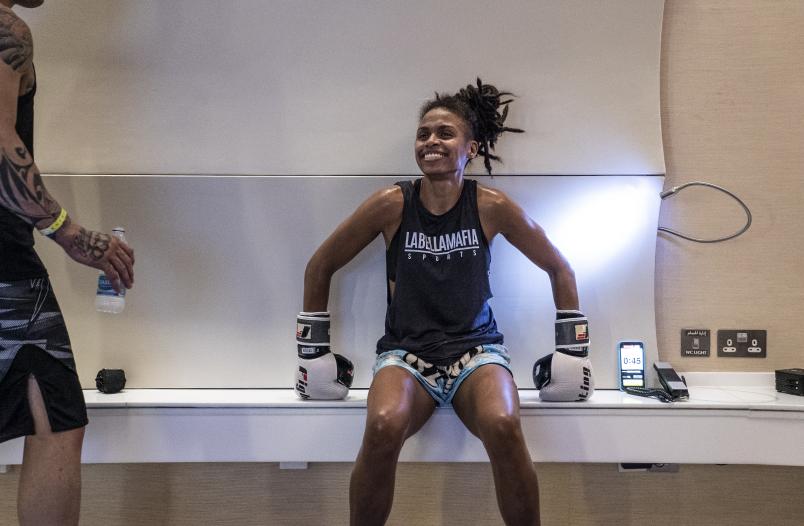 “If she gets too emotional, it will work to my advantage,” says the comparatively stoic Carolina. “The most important thing is to have the mind in the right place when you fight.”

Emotional or not, Carolina has a plan in place for her opponent, coming off a camp that she ranks among the best of her 8-2 professional career. She’ll lean into the size advantage in this one as well, making use of the two inches in height and seven inches in reach she wields over the Liverpudlian.

“It’s also good for me to fight a striker because I get to use my striking skills and also other things we’ve worked on in this camp. She needs to close the distance in order to land punches. If I get to use my reach, that will be my strength and key to win the fight.

“The only thing that matters in when we’re up there. I’m sure that it will be amazing on Saturday.”