Low-Key Lawlor to Let His Fighting Do the Talking

"I just want to go out there and let my performance speak for itself." - Tom Lawlor 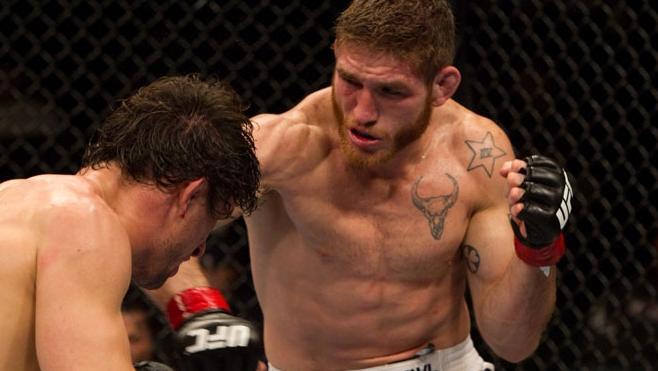 In a few short years in the UFC, middleweight Tom Lawlor has a well-earned reputation for keeping fight fans entertained in and out of the Octagon. But as he approaches Tuesday’s UFC on FUEL TV matchup against Jason MacDonald, there has been a distinct, almost silence around “Filthy” Tom.

“I’m flying under the radar, or at least trying to,” he said, admitting that this course of action wasn’t by accident. “I think I’ve been accused of being not as focused on a fight as I should be. So pretty much I’ve said nothing about the fight except for the fact that I’m fighting. I just want to go out there and let my performance speak for itself.”

That’s unfortunate, simply because Lawlor’s pre-fight antics have added a dose of levity to what is a very serious sport once the bell rings. In fact, it’s been these little sidebars on the way to the Octagon, whether it’s entering as Hulk Hogan or weighing in as Dan Severn, that allow Lawlor to have some fun before it’s time to go to work. But a few critics will always shout louder than the legions of fans that enjoy the non-fighting stuff from the New Englander as well.

“It’s just a few fans, but they seem to think that you should be training 24 hours a day and you should have no life outside of the workplace,” he said. “I always wonder if those same people live their lives like that. Are these the kind of people that are taking work home every night and sitting on a computer and toiling away and hating their lives? And my guess would be yes. These people probably do hate their lives and they want everyone else to be just as miserable and only focus on working all the time.”

Oddly enough, Lawlor’s time living in Florida basically saw him involved in the world of martial arts nearly 24/7. Whether he was helping to run a gym, teaching classes, or just training for his own fights, Lawlor was immersed in the sport. Yet after he moved to Providence, Rhode Island to buy a house, he has seen his life change drastically.

“In the past year I’m kind of less involved in the sport and I’m just training and fighting,” he said. “I’m not helping run a gym, and I’m not teaching classes on a regular basis. Where I live now, there are gyms, but I’m used to more of a one-stop shop for all of my MMA needs. Here it’s kind of fragmented. There are boxing gyms and jiu-jitsu places, and there are MMA places, but they’re not on as big of a scale as some of the places I was used to going to in Florida. So it’s a different environment, and I do miss being more involved in the sport in coaching and helping other people train and being a teammate. With all these gyms up here, I’m getting pulled in different directions as well. I have a bunch of guys that I would consider teammates, but they’re not all on the same team.”

And then there’s always the weather.

“I hated sunshine and the heat and being able to go outside whenever I want so much that I said I’m gonna move to a place that has almost the worst weather in the country,” he deadpans, noting that after New England had some of its best weather in years this past winter and spring, “Any of that suffering and anger that I would have built up over the winter has kind of subsided a bit.”

Despite all the changes, it’s clear that Lawlor still has his sense of humor. With that intact and his training situation settled in the Northeast, all he has to focus on is his fight with MacDonald, which gives him the opportunity to break loose of a skid that has seen him lose three of his last four bouts. Yet he insists that this isn’t something he particularly dwells on.

“Honestly, the only people that ever bring it up are MMA media people,” he said. “No one ever goes, ‘oh man, you lost three of your last four fights.’ (Laughs) I haven’t had anyone say that to me besides when people do interviews with me. But I really don’t like trying to explain it because then it sounds like I’m making excuses.”

If he won’t, then it will have to be pointed out that many people believed he won the three rounder with Aaron Simpson in 2010 that he lost via split decision. Four months later he was doing well against Joe Doerksen before gassing out in the second round and getting submitted. His next bout in October of 2010 was a decision win over Patrick Cote, and after a year off due to injury, he came back in 2011 and got caught and finished early by Chris Weidman. Now going 1-3 in his last four doesn’t sound so bad, but no one looks past the numbers too much these days, and against Canada’s MacDonald, Tuesday may be a must win.

“I really don’t think about it that much,” said the 29-year old. “Maybe I should think about it more. The problem with my record is that I have 12 professional fights, and half of them have been in the UFC. So with this fight, more than half of my professional career will have been in the UFC. So I’m fighting guys that are considered to be some of the top guys in the world and it’s a trial by fire in a way. I’ve been with the company, if I count The Ultimate Fighter, for four years. But before that, I was fighting full-time for a year. So it’s a situation where, and I hate this cliché, but it is what it is.”

In other words, he’s had to grow up in public, which can be a double-edged sword. Sure, the recognition and money is better in the big leagues, but at the same time, your shortcomings aren’t witnessed by 100 people in a church basement. They’re broadcast to millions.

“I don’t think people realize how big of a difference it is between fighting on the local scene and fighting in the UFC,” he said. “If you don’t have that experience, it’s really like a whirlwind when you’re in there fighting.”

Tom Lawlor has survived the whirlwind though, and like fellow fighters Amir Sadollah, Matt Mitrione, and Matt Riddle that followed a similar path, he’s made a home for himself in the UFC. Now all he needs to do is to protect that home against MacDonald, a task easier said than done, but one you know he’s ready to tackle. And watching that may just be better than any flashy Octagon entrance.