Home to six UFC events from 1998 to 2002, Louisiana will once again welcome the warriors of the Octagon for September 17th’s “Battle on the Bayou” in New Orleans. For the fighters competing that night, it will be another opportunity to establish themselves in their respective divisions and for the main carders, a chance to do so before a national television audience on Spike TV.

But for those in the mixed martial arts community in Louisiana, it’s more than that. Never a hotbed of the sport like California, Las Vegas, or New Mexico, the state has only produced a handful of UFC fighters, with current battlers Melvin Guillard, Tim Credeur, Pat Barry, and Dustin Poirier, and vets Rich Clementi and Kyle Bradley being the most notable. So this isn’t just a fight card – it’s a celebration of the sport by some of its most diehard followers.

And despite not having a dozen fighters on the UFC roster, those who did come from the state didn’t moan about their place in the MMA world though, and instead of leaving for greener pastures, many formed a tight bond together, taking an ‘us against the world’ mentality.

Clementi, a New Jersey native who found a home in Slidell, Louisiana, appeared on season four of The Ultimate Fighter and fought ten times in the UFC. He also acted as a mentor to fighters like Credeur and Bradley, and as he explained in 2008, he was blunt about the obstacles fighters in the state were facing.

“A few years back, like five, six years, if you mentioned anybody that was from Mississippi or Louisiana, people kinda joked about them in the business,” said Clementi. “I promote and I manage guys too, and if you knew you were fighting a guy from Louisiana, you knew he wasn’t gonna have any wrestling, you knew his jiu-jitsu wasn’t gonna be that technical, and you might get a tough guy, but predominantly, if you came from a good camp, you’re gonna beat somebody from down south. That really bothered me, and it bothered me personally because I fell in that category. So it really was a goal of mine to try to create a whole scene and get guys who really had talent and bond everybody together. Now we’re pushing some decent guys out there. We have like 4-5 UFC-caliber guys from down there, and that was important to me. We all help each other out, and even some of the guys who aren’t on that level are still a huge part to being where I’m at.”

At the time, Clementi had used the “comeback” season of TUF to begin a career resurgence, and before losses to Gray Maynard and Gleison Tibau ended his UFC run, he reeled off six consecutive wins that included UFC victories over hot prospects Anthony Johnson, Guillard, Sam Stout, and Terry Etim. 2008 was also a big year for Credeur, who brought a 9-2 record into his own season of reality TV – TUF7. And it wasn’t just big for him, as he looked to change the stereotype of Louisiana fighters.

“It’s really tough out there,” said Credeur after his stay in the TUF7 house. “There’s not a lot of 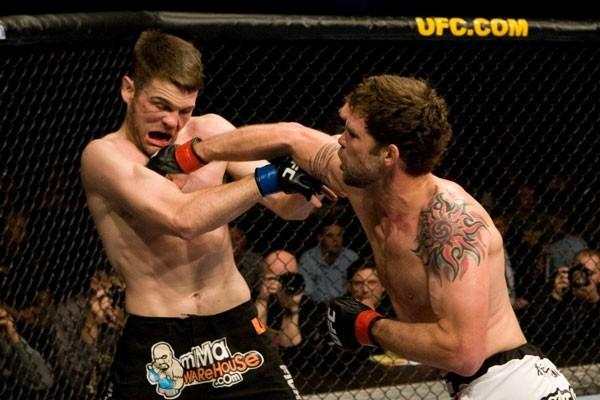 coverage with the media, not a lot of internet sites covering fighting in the south, and it’s kinda like a lost corner. It’s pretty difficult to get out of there unless you get on a show like Melvin Guillard did, like Rich (Clementi) did. And Rich had a lot of the same problems – he fought once in the UFC, lost to Yves Edwards (in 2003), and the guy had like 30-something fights and he was still fighting anywhere anybody would give him a paycheck. And they weren’t big paychecks, but that’s kinda how it is for fighters in the south, and I hope to change that because it’s difficult. If you’re from Renzo Gracie’s team and you’ve got three or four wins, you get a big fight. Down south we’ve got guys with 15-20 fights and they’re trying to get in shows for 500 bucks. Hopefully I can change that and bring some recognition down for some of those guys.”

Credeur’s run to the semifinals of TUF and Clementi’s “prospect killer” persona began to turn the tide, but perhaps the most talented of the LA crew was one of Clementi’s most heated rivals – New Orleans native Melvin Guillard. A veteran of the local scene, “The Young Assassin” first came to the attention of UFC fans on season two of The Ultimate Fighter, but it was what happened after the show ended that really tested his resolve, as Hurricane Katrina hit “The Big Easy” in August of 2005.

“I’ve been through a whole bunch of hurricanes,” said Guillard in 2006. “A lot of them were kinda bad, but for some reason, this was the one. All year we had 23 hurricanes and New Orleans didn’t get hit by any of them outside of Katrina. We thought we were so lucky because we were missing this one and missing that one, but when we did get hit with one, it was the worst one of the whole year.”

That’s an understatement. And Guillard chose to stay behind.

“When the hurricane hit, we were just thinking that we were gonna be here for two days at the shelter, and then we’ll go back home and regroup.” 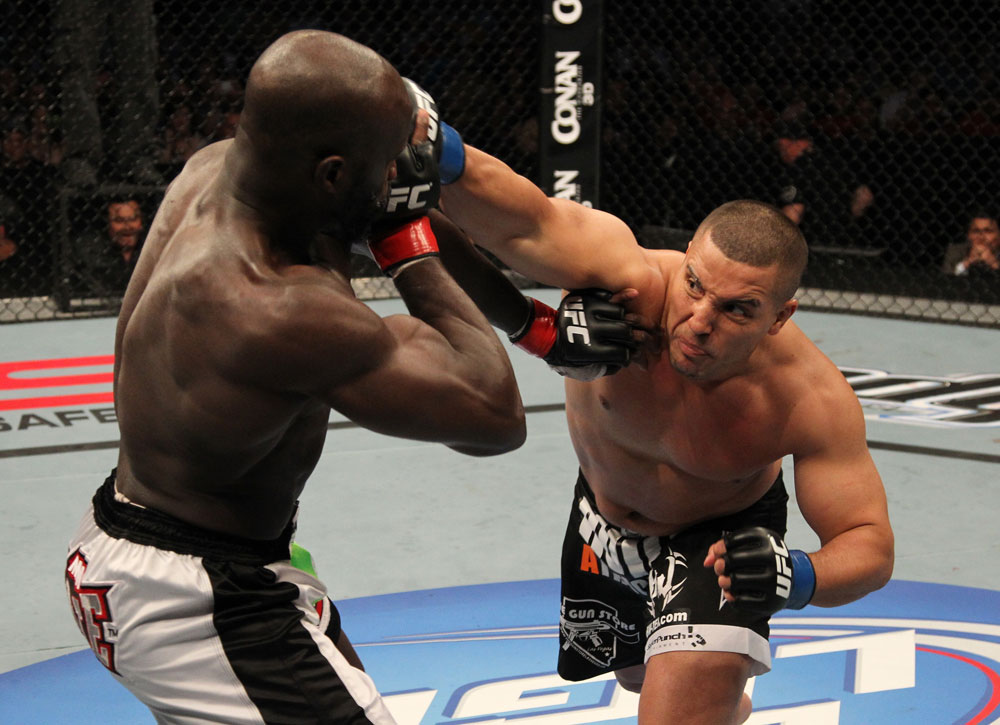 But the water kept rising.

“For some reason, after about the second day, it just hit,” he said. “We had about nine feet of water in the street. We were on the second floor, and the whole first floor of the building was drowned in water.”

And it only got worse, with Guillard and hundreds of others forced to seek refuge on a bridge, the only place where the water wouldn’t engulf them. Guillard did whatever necessary to get people to the bridge, and along the way he saw the devastation and death Katrina delivered to his city and its residents. It was something no human being could ever forget.

“2005 really was a wakeup call for me, and it taught me to look at life differently,” said Guillard. “I used to always want material things because growing up I didn’t get them, but now, I don’t even care for material things as much anymore. I just care that I wake up every day and I’m still healthy enough to get into the ring and fight. That’s what matters to me right now.”

Guillard’s struggles wouldn’t end there, as he battled through the aftermath of Katrina, the death of his father, and out of the ring issues. By 2009 though, he came to the realization that he needed to get his life together in order to fulfill his potential, and after a loss to Nate Diaz, he has run off five straight wins, sailing to the top of the lightweight division.

“There were a lot of disappointing times and one big tragic time for me (in 2005), but all of that I just use for motivation,” said Guillard. “That’s what keeps me striving because now when I step into that ring and I’m representing the UFC, I’m also representing all of New Orleans. From here on out I’m dedicating all of my fights to all those people who lost everything. And I was one of those people; I lost everything. But I don’t let it get me down anymore; I just stay focused and fight to get paid and see another day. It’s a blessing that I made it because a lot of people didn’t make it.”

Heavyweight up and comer Pat Barry was one of the lucky ones who got out, though that’s a relative term considering that he lost his grandmother and his home in the tragic storm.

“Katrina came and was way more devastating than we actually believed,” said Barry before his 2008 UFC debut. “We heard it was gonna be bad, but no one really believed it was going to be that bad. When it came through, we had an option, which all people do – we could sit in a chair, grieve, rot away and disappear, or we can accept the fact that it happened and that there’s nothing we could do about it, and move forward. It was a devastating situation to be in, and emotionally it was painful, but we evolved and kept moving forward.”

That’s Louisiana attitude at its finest.

“Nobody ever truly leaves New Orleans for good,” said Barry. “You may move away and live

somewhere else for a while, but if you’re from New Orleans, you always go back, no matter what happens.”

“All of us are grinders and we never quit,” said Credeur of Louisiana fighters. “Yeah, I might take an ass beatin’ for a while, but I’m not gonna quit unless you almost kill me. That’s the way we fight because that’s how we’ve had to fight. We’ve had to scratch and claw for everything we’ve gotten in our careers. Nothing was given to us, none of us were spoon fed, and we had to fight monsters every fight. And I think that builds a lot of internal fortitude.”

Credeur battled through his own dilemma, as a birthmark on a brain scan was thought to be something worse, costing him nearly two years of his career until he was cleared to fight, but his determination to return, along with Guillard’s resurgence and Clementi’s previous Octagon work and mentoring, paved the way for Barry and Poirier, as well as the next generation of Louisiana fighters. And as Credeur warns, when you’re facing him or one of his peers, being talented isn’t enough – you have to be ready to dig deeper than you ever have before.

“Let’s be honest,” said Credeur, the state’s first Jiu-Jitsu black belt, earlier this year. “I was not a widely recruited high school athlete for any sport, I’m not this great Brazilian Jiu-Jitsu world champion talent that was scouted by the UFC. I’m not that and I never have been; I’m just a guy that worked really, really hard and made sacrifices a bunch of other people weren’t willing to make to be where I’m at. And when I get in there, I’ll be damned if I’m gonna beat myself. As best as I can, I’m gonna fight until either he falls down or I fall down or my heart explodes. That’s the only way that I really know how. Some of that is because of the way that I’ve been raised. In Louisiana, there’s a really blue collar mentality. We work for everything we have. So many things go wrong in our state – hurricanes destroy our homes, our lives are destroyed by the whims of the oil barons, and the oil explosion in the gulf pretty much ruined our economy. I think Louisiana is ranked 49th in the country in everything – education, roads, everything. It’s a hard life down here, and it’s tough. So to get by it takes hard work, sacrifice, and dedication. And that’s all I know.”