The chaos surrounding the current state of professional sports is no problem for Louis Smolka. He loves the chaos.
By Thomas Gerbasi, on Twitter: @TGerbasi • May. 26, 2020

Louis Smolka wasn’t out with friends or celebrating as Memorial Day weekend began last Saturday. He had a fight to get ready for.

“I've been running up and down mountains,” he said when I caught up to him seven days before he steps into the Octagon this weekend against Casey Kenney.

Well, you did want to be in show business, he was reminded.

“I know,” he laughed. “I wanted to be an entertainer; the lights, the glitz and the glamour sucked me in.”

Smolka is in good spirits these days, in spite of the COVID-19 pandemic that has gripped the world over the past few months. The reason is simple: he’s getting into a fistfight on Saturday.

“I'm happy, I love it,” he said. “This is what I'm about. I love the chaos, I love the craziness, it's kind of like that Hawaiian mentality, just scrap. I don't have time to get nervous about anything. I love short-notice fights. This is where I thrive.”

If you want to assume that Smolka was waiting for his phone to ring as soon as the UFC got back to business, that’s a safe assumption. But that doesn’t mean “Da Last Samurai” didn’t get in a little down time before getting ready for battle.

“So right when the quarantine started, I geeked out on every conspiracy theory I could find and learned as much as I could for like a week, and we'll call that my rest right there,” Smolka said. “Then I said, all right, the world hasn't ended yet, so I guess I'm gonna go back to training and I've been doing my best running around. I've got a nice little calisthenic area outside my apartment complex so I've been doing my pull-ups and stuff and I was just trying to stay in shape the best I could and get some shadow boxing in. At Oyama's they've had to keep the practices real small, so it's like me and one other person.”

So it wasn’t all Netflix and chill, then?

“You got to better yourself,” said Smolka. “That's what the quarantine is for.”

Given his most recent victory over Ryan MacDonald last September, the evolution of Louis Smolka is going just fine. He even has some street cred back home in Hawaii after scoring his biggest knockout win to date.

“It was my first knockout with hands,” he beamed. “(UFC veteran) Russell Doane always told me that there's no feeling like knocking a dude out with your hands, and he's honestly right. The adrenaline you get from that is crazy. I felt so good. I was going nuts and I couldn't stop screaming. I loved it. It's an amazing feeling.” 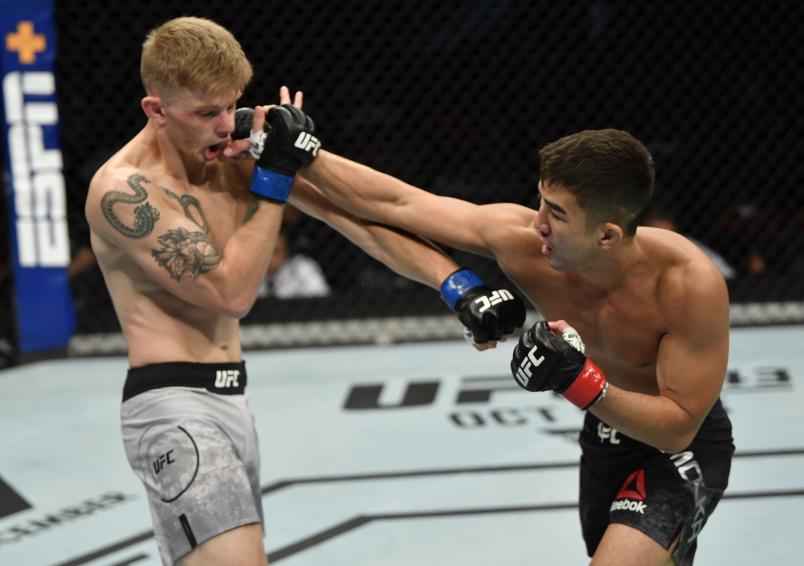 That begs the question, though, will Smolka now fall in love with his hands?

“I've always been trying to learn,” he laughs. “It's what Hawaii's known for, the hands, so I had to learn. I was the only ground guy (in the gym).”

So he’s on the upswing as a striker?

With his hands catching up to a stellar ground game that has produced seven submission wins, there’s even more reason to be excited when the 28-year-old steps into the Octagon. At least that’s the feeling from his opponent, Kenney, who is certain that when it’s time to fight on Saturday, Smolka will be there to scrap. That kind of respect from an opponent means a lot to the Hawaiian.

“It's like a mutual respect thing,” he said. “And it's fun. If he knows that's what I'm about, then the fans definitely know that's what I'm about, and that's the goal, to entertain the fans. And that's what we're here to do, to make them look forward to my fight, and if my opponent is looking forward to it, then the fans definitely have to be. So it's a really good feeling to be recognized and knowing that the things I've been trying to accomplish are paying off.”

Even in the midst of a pandemic. That’s an impressive feat. So since Smolka loves the chaos and short-notice fights, can we expect to see him in June if a spot is available?

“I don't want to get ahead of myself, but I would be down. That sounds like a great idea.”

Maybe Smolka has found his happy place. No talk of rankings or moving up the ladder, no picking the right fights to get him in the title race.

“The situation in the world is changing day to day and I'm just taking it as it comes,” he said. “I'm not rocking the boat, I'm happy and I'm gonna make the best out of anything.”