Bantamweight Veteran Assess His Career To Date Ahead Of Vegas Showdown With Morales
By Thomas Gerbasi, on Twitter: @TGerbasi • Dec. 3, 2021

Before he was scheduled to fight Sean O’Malley in July, Louis Smolka’s daughter, Lucy, knew all about her dad’s next opponent, the guy with the multi-colored hair.

That fight didn’t happen due to injury, and now, Smolka will make his long-awaited return on Saturday against Vince Morales.

Is Lucy aware of who “Vandetta” is?

“Kinda,” Smolka laughs. “I don't know if it's dominating the house the same way, but yeah.”

The reason this is an interesting contrast is because a fight with “Sugar” Sean on the UFC 264 pay-per-view card at T-Mobile Arena would have been a game changer for the Hawaiian veteran in terms of media exposure, hype and all those good things that can lead to a change in a fighter’s tax bracket.

Morales, while a heck of a fighter and a stiff test for “Da Last Samurai,” doesn’t carry the same hype as O’Malley does. Does it matter to Smolka?

“Honestly, I'm just trying to fight,” he said. “I'm getting older, and I'm trying to make some money while I've still got the opportunity.”

Awesome moment 🙌@LastSamuraiUFC meets @JoseAldoJunior before they compete on the same card Saturday at #UFCVegas44 pic.twitter.com/aPJlIrF1bP

Words spoken by the ancient, grizzled vet that turned the ripe old age of 30 in July. He laughs when this is pointed out to him, but he does admit to having that “I’m 30” talk even before he blew the birthday candles out this past summer.

“I think everybody does, but I've been having it since I was 28,” he said. “I realized how quickly time was going by and I was like, oh man, I used to be the young kid at the gym; now I'm getting older and growing up and I have a kid of my own. I used to be the young knucklehead in the gym that just started and is all raw and wondering what the future holds, and now I'm a veteran trying to battle the new blood back.”

Morales could be considered a member of that “new blood” pack, but even he’s 31 years old. It makes you appreciate what Smolka has done in his 15-fight UFC career, but he doesn’t indulge in the luxury of reflecting on past glories.

“I'm trying to look forward,” he said. “I had a time when I was really high on myself - I thought I was gonna be great. And I still do, but I don't feel like looking backward. That doesn't get you anywhere. In combat sports you're only as good as your last performance, so I feel like you gotta keep your head down and just move forward.”

If we’re going by last performances, Smolka’s was one to remember, as he halted Jose Quinonez in the second round of their December 2020 bout. But that was a year ago, which means Smolka has some time to make up for if he wants to get moving on that being great stuff. 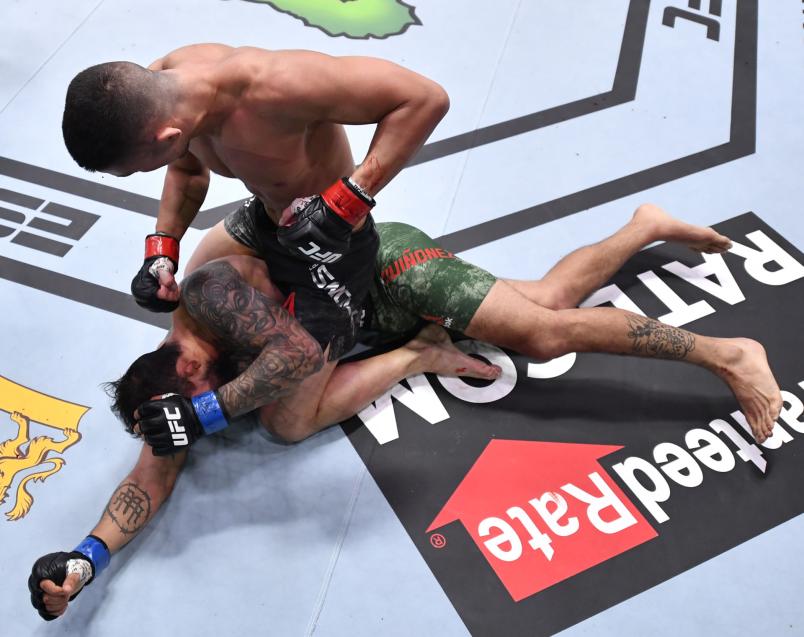 “I believe that I'll still be great, but maybe not in the same ways that I originally intended, which is kinda how things usually work for me,” he said. “I have a plan and it kinda works out, but it's not in the way I originally intended it to. I was gonna beat Jon Jones' record at one point. I was certain of it. And after I made it to the UFC, I ran through Alp (Ozkilic) and I was like, 'This is it, this is my time,' and I kinda fell flat and just took it too lightly. I regrouped, went on another run and said, 'Okay, this will be the time for sure.' It didn't happen, I got choked out, kinda destroyed my psyche and now we're here.”

Smolka’s debut against Alptekin Ozkilic was in January 2014. He lost his next bout to Chris Cariaso, then ran off four consecutive wins before going on a four-fight losing streak that began with a defeat against current flyweight champ Brandon Moreno in 2016. That losing skid ended with him getting cut by the UFC, but with three wins on the regional circuit, he returned as a bantamweight in 2018 and has won three of five bouts.

Now, every fight has that much more weight attached to it, and while Smolka is fine with the pressure that brings, he also admits that having to readjust his own expectations took some getting used to.

“There's a part of it that eats away at you,” he said. “After my first loss, my manager Jason (House) sent me a quote: 'The Definition of hell is when you go back and you look at what you could have been.' From that perspective, it's a little bit hard to pivot and change your expectations, but you gotta be able to or else you're delusional, and I haven't really seen that work out well for anybody. If you're not looking at true facts to assess your trajectory, then you're just out of your mind already. There are some things where I am optimistic, but this is within the realm of possibility. And it is hard. It's like ripping away a bit of what you planned, but at the same time, it's life, and you carry on.”

That’s as honest an assessment as you will get in this, or any other, business, but that’s just the way Smolka is built.

“I just try to be objective,” he said. “The truth lies in objectivity. Honestly, our sport is really mapping uncharted ground. What we're doing hasn't really been done, save for like the gladiators, and I don't think they had anywhere near the resources that we do today. So we're pushing and we're pioneering to new space, and I honestly think the first couple generations are gonna be critical in what our sport can become eventually. You see the era of the grapplers, and you see the strikers that are able to stop the takedown, and the jiu-jitsu guys that exploit that, and so on. But then you see everybody get more and more well-rounded so then you see the wrestle-boxers come out and the jiu-jitsu guys' takedowns. You see all these evolutions and these guys getting better and better, but at the same time, our sport is so young, and we've done it with so little instruction and know how that whoever can create a roadmap for how this stuff really does work can create a universal blueprint for MMA, and that's gonna pay big dividends, I think.” 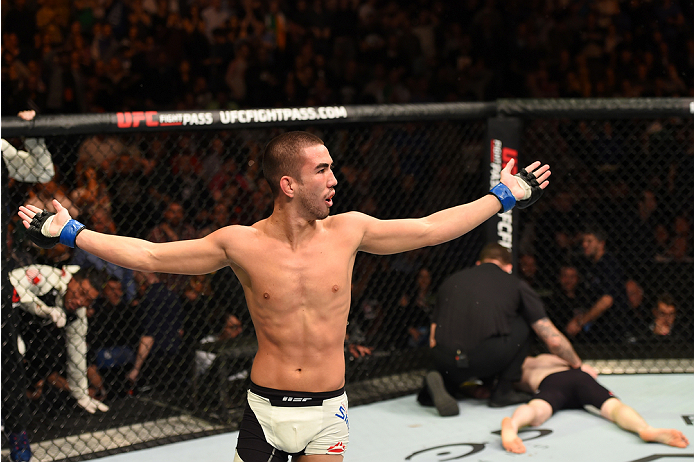 Smolka celebrates his submission victory over Paddy Holohan in their flyweight fight during the UFC event at 3Arena on October 24, 2015 in Dublin, Ireland. (Photo by Josh Hedges/Zuffa LLC)

It's only a few sentences, but the excitement in Smolka’s voice shows just how much he still cares about the art in mixed martial arts. Sure, it’s how he puts food on the table for his family, but it’s so much more than that for him, so he tries to not let the work part of it take the joy away.

“Every day is a struggle to not see it as a job and something to have to do,” Smolka said. “It's one of those motivational things you can or you can't get right. If you see it as work, it's work. If you see it as fun, it's fun. I like learning new things, so if I learn a new system or I'm able to create some new muscle memories within my body that are working more smoothly today than they did yesterday, I'm happy. It is hard to remember to see it that way because you wake up in the morning and you're sore, you're tired, then the first practice was brutal and the second practice you're just like, 'Oh my God.' (Laughs) But I just try to go through it, and when I'm actually doing it, I have fun. It's just getting started that's a bit of the problem.”

That part’s done when it comes to Saturday night. He put in his camp, made it to the scale healthy, and then made weight.

Tomorrow, the joy comes back.