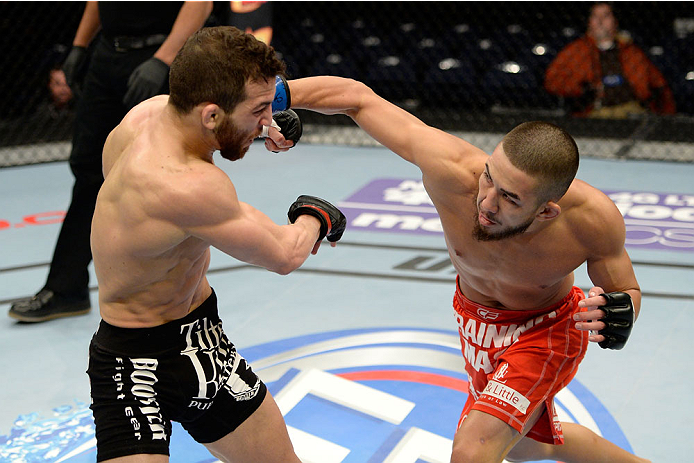 There is a part of Louis Smolka that still doesn’t believe all of this is real.

The UFC, the main card placement, the grand opportunity, the hype - on the eve of his second appearance in the Octagon, there is a part of the 22-year-old that still can’t fathom that he’s living his dream.

“It’s pretty surreal,” says the undefeated Hawaiian, who returns to action Saturday night against veteran Chris Cariaso in the opening bout of the UFC Fight Night: Brown vs. Silva main card at U.S. Bank Arena in Cincinnati. “I’m actually surprised that it’s happening like this. To be honest, this is something I always dream about, even during that time, but having it happen and dreaming about it are two completely different things.”

Smolka arrived on the big stage earlier this year, stepping up on short notice and working behind clean, rangy striking to earn a unanimous decision win over Alptekin Ozkilic back in January.

The performance - coupled with a run of victories for fellow Hawaiians Brad Tavares, Max Holloway and Smolka’s training partner, Russell Doane - put the 7-0 prospect on the radar. Now four months later, he has a chance to go from up-and-comer to legitimate contender.

With the flyweight division still in development and reigning champion Demetrious Johnson dispatching challengers faster than they can climb the ranks, there is an opportunity for fighters like Smolka to string together a couple strong outings and make a quick ascent up the divisional ladder. It’s a reality that isn’t lost on the talented upstart heading into this weekend’s showdown with Cariaso.

“It’s a pretty big deal,” he says of the opportunity to share the cage with the seasoned veteran from California. “I’m pretty sure if I win, I’m cracking the Top 10. That’s a pretty big deal to me. Honestly, I feel like it means I’m pretty close to a title shot too, as long as I can keep winning.”

While most fighters enter the UFC with their sights set on championship gold, Smolka has set his goals even higher than that, and knows that his contest with Cariaso is a pivotal step in reaching the lofty goal he wants to accomplish.

“One of the things that I want to do is try to beat Jon Jones’ record for being the youngest fighter to win a UFC championship and it means a lot to be that much closer.”

The current UFC light heavyweight champion was 23 years and 242 days old when he defeated Mauricio “Shogun” Rua to claim the title at UFC 128 in March 2011. When he steps into the Octagon for his sophomore appearance on Saturday, Smolka will be 67 days shy of his 23rd birthday, giving him until March 14, 2015 to topple whoever is holding the flyweight title at the time in order to best Jones’ record.

As much as he holds it out as a goal - and one he believes is possible to achieve, given the state of the weight class - the wise beyond his years prospect is also keeping things in perspective.

“In this division, it’s definitely doable because I need what, two more fights and then I’m (in title contention)?” he asks in a “does that sound right to you?” manner, acknowledging that Johnson’s current run of success creates a fast lane to fighting for the title as long as the victories keep coming.

“I kind of look at it like that and you do kind of think about it like that, but at the same time, it is one fight at a time. I’m not trying to get too far ahead of myself. I need to beat Chris or else all that planning is for nothing.”

That perspective extends beyond just his upcoming fight and permeates his entire approach to fighting.

Having yet to taste defeat, and with a win on the biggest stage in the sport under his belt, it would be easy for the easygoing Hawaii Elite MMA representative to get caught up in the buzz that is starting to build around him.

Smolka, however, doesn’t appear to be at risk of that. Despite his age, unblemished record, and relative lack of experience, he’s acutely aware that all of it could be gone in an instant and he allows that reality to push him during preparation.

And make him freak out before each and every fight.

“I’m fine until about three weeks out and then I start freaking out,” he says with a laugh. “I’m like `What if he hits me with this? What if I get knocked out? How do I know that I’m better than him? What if he does something I’m not ready for?’ Every fight, I tend to freak out and I get nervous. I always tell my coaches, `If I’m not worried, you guys should be.’

“In my head, not getting freaked out is being too over-confident and you can’t ever do that. In my head, I always believe in myself - I believe I’m going to win - but this is a dangerous sport. You slip up a little bit and you’re face down on the canvas sleeping. A half-inch too far to the right or a half-second too late and you’re done.

“Knowing that kind of scares me,” he adds. “I’ll do my best to not let it happen, but you know.”

More importantly, he knows, and that will continue to serve him well going forward.

For right now, however, he’s content to take it all in, embracing the opportunity to add his name to the list of talented Hawaiians to compete under the UFC banner and excited to be able to make this journey alongside his friend and teammate Doane.

“It’s amazing. It’s really good to have that support system there,” he says of forging a path in the UFC at the same time as Doane, who earned a second-round submission win over Leandro Issa in his organizational debut at the beginning of the year. “He’s one of my best friends and to have him with me the whole time is really amazing. It’s something we dreamed about since we first started fighting and training together and this was the goal; this was what we always wanted to make happen and it’s finally happening.

“Every fighter wants this - every fighter wants to be that new guy that’s coming in, getting all the buzz, all the attention - and for me, it’s pretty awesome that it’s actually happening to me. It’s the dream becoming a reality.”

If the pattern continues and all of Smolka’s professional dreams keep coming true, there will be a new UFC flyweight champion sometime around mid-March of next year.