Louis Gaudinot Turns the Page to 2015 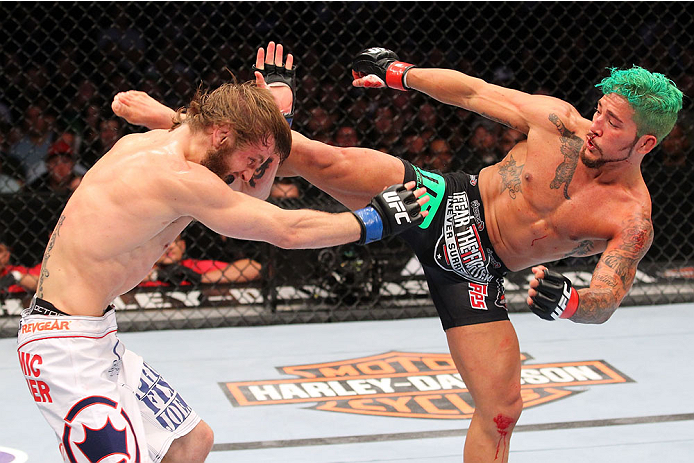 As 2015 dawns, no one wants to move on from 2014 more than Louis Gaudinot, who understandably describes the year gone by with just one word: “frustrating.”

Winless since 2012, when he stunned Brazil’s John Lineker, submitting him and earning Fight of the Night honors in the process, Gaudinot only fought once in 2013, losing to Timothy Elliott. 2014 was going to be a new start for him, and it looked like it, as he finished Phil Harris in just 73 seconds in their March bout in London.

But a failed post-fight drug test for a banned diuretic turned that win into a no contest and a suspension. Gaudinot’s shot at redemption was to take place in Halifax in October against Ireland’s Patrick Holohan, but again, the bad luck clouds swirled around the New Jersey resident.

“I felt in amazing shape, I had a great camp and then the week before I’m supposed to fly out for the fight, I feel a little sick,” he recalls. “I take two days off, my fever gets up to 105, and then I come to find out I have pneumonia. I was set on fighting, but the doctor told me not to. I was going to anyway, and my coach was like ‘listen man, if you can’t breathe, you can’t fight.’ I would have still been on medication and the weight cut would have made it worse. It’s tough for me to pull out of a fight that close because you put in so many weeks of hard training, but I guess it’s part of the business.”

Which brings us to this Saturday and Gaudinot’s return against Koji Horiguchi at UFC 182. The rising Japanese star is currently ranked 11th at 125 pounds, and he has won eight straight, including three in the UFC. A win over Gaudinot likely moves him up the rankings and possibly into the title fight discussion. It’s a place on the B side that “Goodnight” has been in before.

“I compare it to the Lineker situation,” Gaudinot said. “Lineker was dropping down to 125, he had 13 wins, a bunch of KOs, he was looking real good, and everybody was singing his praises and jumping on the bandwagon. I kind of put a stop to that real quick, and I’m looking to do the same thing on January 3rd with Horiguchi.”

In other words, Gaudinot doesn’t care where he’s placed in the pecking order, as long as he gets his shot to have the last word with his fists. And in the flyweight division, if you can get that word, you may be within striking distance of a shot at champion Demetrious Johnson, who has already done a stellar job of cleaning out all contenders in his immediate vicinity.

“A lot of guys in the top five have already had their shot at Demetrious Johnson, and he’s saying he wants new challengers and stuff like that,” Gaudinot said. “I haven’t had an official win since 2012, but I still think I’m one of the best in the world, and I’m going to show it on January 3rd, and hopefully after that I get matched up with a top ten opponent, I can get another good win, and get myself in those talks.”

It’s the beauty of the fight game, that one night can change everything and erase any negativity from the past. Yeah, going over two and a half years without an official win hurts the ego, the wallet, and the record, but if Gaudinot upsets Horiguchi, he’s back in the race in a big way, and at 30, he’s still got plenty to give.

“I was joking with my teammates about this,” he said. “I turned 30 in August and I feel amazing. I feel like I’ve got old man strength now. (Laughs) I feel a lot better than when I was 25.”

This “old man” isn’t thinking about past glory days though. He’s ready to create new ones.

“It’s been a while since I was able to compete,” Gaudinot said. “I wasn’t able to fight last time, so I’m excited to get back out there, I’m a little bit anxious, and I’m just looking for the win and looking to give the fans an impressive performance and show the bosses that I should be matched up in a top ten match my next fight.”