Louis Gaudinot: Mean, Green, and Back on the Scene

"I’m feeling healthy and ready to go again, and I’m excited to get back in there because it’s been so long." - Louis Gaudinot 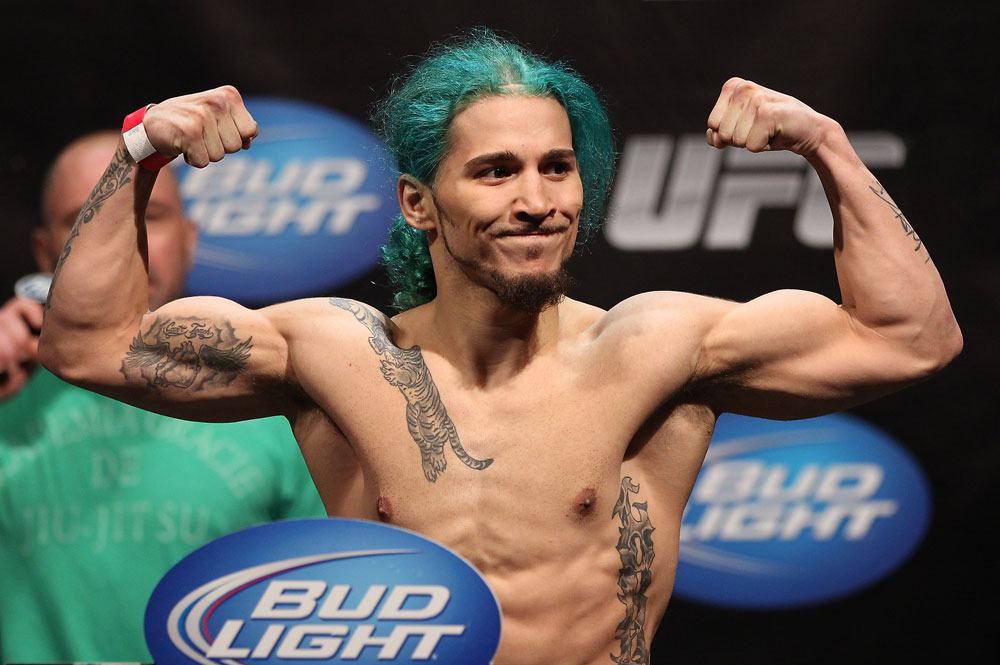 There will be some changes the next time you see Louis Gaudinot at UFC 164 on August 31. Don’t worry, the hair will still be green, but at least when he meets Tim Elliott in their flyweight bout, the Hoboken resident won’t be battling his opponent and his hair on fight night like he did in his win over John Lineker in May of 2012.

“I finally cut it in June,” he said, “and it won’t be in my face. Watching the fight back, I’m like ‘how the hell did I fight like that?’ (Laughs) It was like a mop over my face. So there will be no hair technical difficulties in this fight.”

That’s a good thing for fans of the former Ultimate Fighter 14 cast member, who not only beat Lineker with his hair covering his face, but submitted the Brazilian and picked up Fight of the Night honors. In the fairly new 125-pound weight class, it was a statement-making performance, and you got the feeling that with one more win, there would be title contention talk for “Goodnight” Gaudinot.

But we haven’t seen him in the Octagon since.

“They had me booked for a couple fights, and it was funny, they let me know I had the fight and two weeks later I get the contract and before I could even sign it, I ended up getting hurt,” said Gaudinot. “One time back in September, and then this year again around February. So I had two injury setbacks, but now I’m feeling healthy and ready to go again, and I’m excited to get back in there because it’s been so long.”

It’s the curse of the prizefighter. To get ready for a fight, you have to fight, and when you fight, you have to go hard enough to get in the proper work and get a feel for what things will be like when it’s on for real. Unfortunately, when you do that, your odds of getting injured rise.

“It’s not easy, as you can tell,” he said. “But this training camp’s going good. I didn’t reinjure myself or anything, and I’m still able to train hard and go hard. You don’t want to go too light because you want to put yourself in the scenario that you’re in a fight, so when you go out there and you’re on stage, you’re not pushing yourself for the first time; you want it to be like you’ve been there 20-30 times before so you know exactly what to expect and what your body can do. So it’s definitely not an easy task getting ready for a fight, and I think that’s why so many people do get hurt getting ready.”

If there has been a silver lining for the 29-year-old, it’s that he hasn’t disappeared in the minds of the fans, or the media that currently ranks him seventh in the division, one slot below the man he defeated, Lineker.

“I think I’m picking up where I left off,” he said. “I read all the websites and all the news articles, and a lot of times when they mention the flyweights, a lot of people in the comment section will write ‘Louis Gaudinot had that crazy fight with Lineker; where the hell has he been?’ And Lineker has won three in a row, so the more he wins the better I look, but I don’t think too many of the fans have forgotten about me, and at the end of the month I’ll remind them if they did.”

In Elliott, Gaudinot will face a similarly aggressive-minded foe who also picked up a Fight of the Night bonus in his most recent bout, a December 2012 win over Jared Papazian.

“He’s good all around,” said Gaudinot. “He fought (John) Dodson the same night I fought, came in on short notice and pushed Dodson pretty good. It was a really close fight and probably could have got Fight of the Night if me and Lineker hadn’t got it. I also thought he looked great against Papazian – he looked good standing up, good on the ground, and he’s got good takedowns – so it’s definitely not an easy fight. It’s a tough fight, but I’m gonna use it showcase the reasons why I should be one of the top five flyweights.”

A win should move him up, and with number one ranked Joseph Benavidez fighting number five Jussier Formiga in September and champion Demetrious Johnson having already beaten Benadvidez, number two Dodson, and number four John Moraga, the stage could be set for Gaudinot to jump even higher. And that’s just fine with him.

“When John (Moraga) got the title shot, he only had two wins in the division, and at the time I was probably going to fight before he fought back in December. And me coming off two wins and being a household name because I was on The Ultimate Fighter, maybe I could have had that title shot that just happened had I not been injured. But everything happens for a reason. He (Johnson) looked good in his fight, and now he’s looking for new challenges, so hopefully everything goes my way at the end of the month, and we’ll see what the UFC wants. But I’m just ready to fight anybody, and I’m not looking past Tim Elliott.”