A Lot Has Changed, But He's Still 'The Same Old Cowboy'

The last six months have brought a whirlwind of changes and new experiences for the veteran UFC gunslinger but, as always, “Cowboy” is taking it all in stride and loving every minute of it.

In June, he and his longtime girlfriend welcomed their first child, a son named Dacson Danger Cerrone, into the world. Six weeks later, he experienced a “total silt out” while cave diving, losing sight of the tow line and his friend who was in the water with him, prompting an Instagram post that began with the words, “Today I can honestly say I’m happy to be alive.”

When a renowned wild child and adrenaline junkie like Cerrone feels like he had to fend off the Grim Reaper, you know it was serious.

Not long after that, the 35-year-old had an acrimonious split with the team at Jackson-Wink MMA, declaring he would no longer be working with his long-time coaches after one half of the titular tandem, Mike Winkeljohn, informed him that he would be working with and cornering his opponent this weekend, “Platinum” Mike Perry, who started training at the Albuquerque, New Mexico outpost two months prior to his UFC 225 bout with Paul Felder.

Taken individually, each one of those experiences would be major events for most people and perhaps prompt a change in mindset or approach, but for Cerrone, they’re just new stories to tell and an opportunity to embark on new adventures, all of which have him wired for sound heading into Saturday’s clash with Perry at the Pepsi Center in Denver.

“Lindsay is the best mom ever; she takes care of the boy perfectly,” says the proud papa, who is completely in love with fatherhood. “It’s fun — I love making that boy laugh and giggle and taking him swimming. I’ve got so many fun activities for when he’s older. I cannot wait. He’s going to be the man. I can’t wait. I’m so excited.

“Next weekend we’re going down to Homestead, which is the championship for NASCAR, and after that, I’ll be down in Florida and there are a bunch of caves and I’ll be diving,” adds Cerrone with a laugh, explaining that his summer scare won’t keep him out of the water. 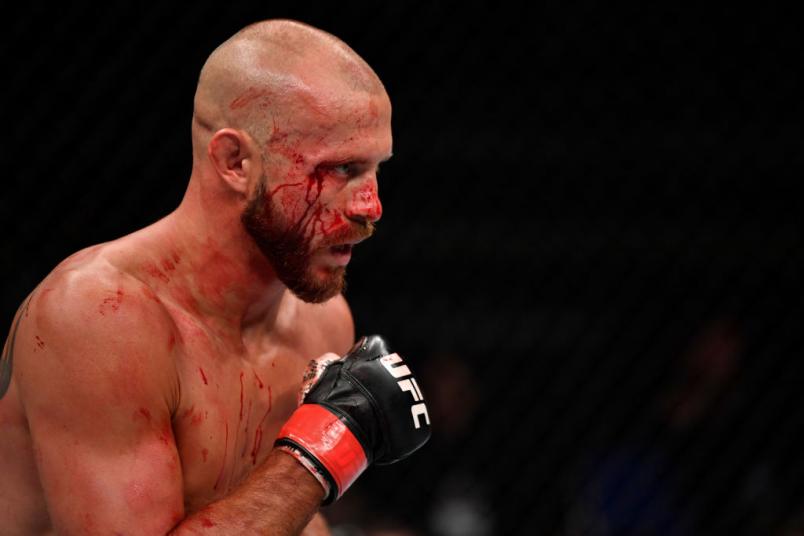 SINGAPORE - JUNE 23: Donald Cerrone battles Leon Edwards (not pictured) of Jamaica in their welterweight bout during the UFC Fight Night event at the Singapore Indoor Stadium on June 23, 2018 in Singapore. (Photo by Jeff Bottari/Zuffa LLC/Zuffa LLC via Ge

As for his training situation and this weekend’s clash with Perry, the 45-fight veteran says he has no problem with his opponent and that making the full-time move to training at his ranch in Edgewood, New Mexico produced one of the most enjoyable training camp experiences he’s had in a while.

“I have to set him aside; I can’t dwell on that,” he says of Perry, who lobbied for the fight and then shared his memories of sparring sessions with Cerrone in the build up to this weekend’s co-main event tilt between the two. “He’s just doing what he has to do; it’s all good.

“(For this camp), everyone came out of the woodwork. I’ve got Mickey Gall out there, Joe Schilling, Jonavin Webb; all the old school (guys). It’s been a lot of fun; one of the most fun training camps we’ve had in a long time.

“It’s crazy how they’re all the same in their own different way with the camaraderie,” adds Cerrone, reflecting on his recently wrapped training camp. “It’s a lot of fun, man. I enjoy my job and training every day. I don’t enjoy pushing my body to the breaking point every day, because that part sucks, but the camaraderie and being with everybody and everybody pushing for the same goals is fun.

One of the other factors that has Cerrone in great spirits and chomping at the bit to step into the cage on Saturday night is the fact that this weekend’s event is a home game of sorts and presents him with an opportunity to become the first fighter in UFC history to garner 21 victories inside the Octagon.

While he’s been based in New Mexico for a number of years, Cerrone grew up in the Denver area and relishes the opportunity to share some of his fight week experiences with his friends and family and compete in front of his hometown fans.

“You couldn’t have written it any better. It’s pretty cool,” he says of getting to chase the all-time wins record at home, on the 25th Anniversary show this weekend. “(Being a part of this event and the records definitely mean something to me), but then they don’t either; you know what I mean?

“I just left the Denver Broncos training facility with all the guys; every one of them signed a football for me and I had one of my buddies Justin with me, who is a lifetime Broncos fan, and I gave him the ball.

“Him being excited about the ball means more to me than anything. It’s cool to have a signed autograph ball — sweet — but it’s cooler to fight in front of my hometown. For me, that’s what I love. Everything else is just gravy.

“There is no place I would rather be than inside that cage on Saturday night fighting.”

And he plans on giving the fans their money’s worth when he steps in there.

“We’re going to fight, man,” he says, chuckling. “If Perry does what he said he was going to do and meets me in the middle, I would feel like I am robbing people of their money spent on tickets and cable bills if I didn’t go out there and fight exactly how they want me to, so that’s what I plan on doing.

“I plan on swinging for the fences and bringing this b**** home.”

A lot has changed in the last six months, but he’s still the same old Cowboy.