"It’s hard for me to turn down a fight. I just love fighting and that’s why I got into this sport." - Lorenz Larkin 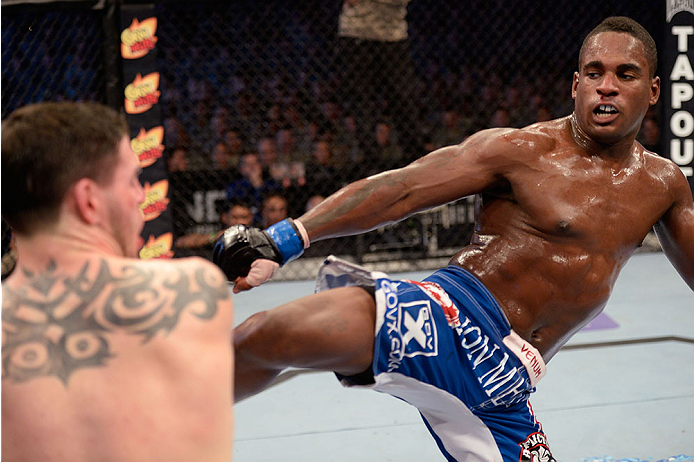 The picture on Lorenz Larkin’s Twitter account may not be of the 27-year-old UFC middleweight, but in paying tribute to late WWE star The Ultimate Warrior, it does say a lot about the Californian’s approach to his job as a mixed martial artist.

“I had guys that I liked, but that was my favorite wrestler,” said Larkin of Warrior, who passed away on April 8 at the age of 54. “It never changed. He was exciting, and to me, he was the first exciting wrestler. He was crazy, running full-speed to the ring, he was definitely my favorite of all-time. It was just the whole entertainment factor.”

Larkin may not wear outlandish outfits or give over the top promos, but when he steps into the Octagon, it’s all about putting on a show, and the way he sees it, that all comes down to his pure love of the game.

“I love that atmosphere, I love the feeling you’re gonna get before you fight,” he said. “And it’s hard for me to turn down a fight. I just love fighting and that’s why I got into this sport. It’s something I really enjoy doing, and now I’m able to fight and make a living out of it, so it’s the best job in the world. I find it therapeutic.”

It may be an odd form of therapy, but it works for the Riverside native, who will be in this Saturday’s co-main event slot against Costas Philippou. On paper, it’s another one of those can’t miss fights, with two 185-pounders standing and trading from horn to horn. Yet with Philippou showing in the past that it’s possible to take him out of his game with some wrestling and ground work, Larkin is clear in asserting that if the takedown’s there, he’s taking it.

“It’s MMA,” he said. “My thing is, it’s an all-around game, so say I’m whipping his ass standing up, I would still look for a takedown if the opportunity presented itself. This is the sport. It’s not boxing. I’m looking to win and put him away, and do it all-around. That’s the whole reason why we train in all aspects of mixed martial arts.”

So he won’t let his ego get the better of him if the New Yorker tries to goad him into a stand-up brawl?

“I don’t care,” he laughs. “You can have an ego. My thing is, in professional fighting, there’s nobody who’s scared and you won’t find somebody that’s intimidated by you. If you do, they’re not going to sign the contract. Guys know who they’re going to fight two months before they even fight, so anybody who’s scared is not even going to sign that contract. I’m going in there with the intention to put him out. I don’t want a decision in this fight, and that’s the goal. I don’t have an ego with it; I’m just an MMA fighter and I hope he’s an MMA fighter instead of trying to be a boxer. I don’t think I can get mad in there. I can’t even do the whole faceoff thing.”

This is true, yet when it’s time to fight, “The Monsoon” has engaged in his share of battles where the spit and blood’s flying and both combatants are doing everything in their power to send their opponent home with a loss and some bruises.

This California cool outside the Octagon and intensity inside of it has made Larkin a fan favorite going back to his Strikeforce days. And while his 2012 Strikeforce win over Robbie Lawler was followed by a 1-2 slate thus far in the UFC, he knows that he’s better than what his Octagon losses to Francis Carmont and Brad Tavares showed.

“When I look back at the fights I feel kind of disappointed in myself in a certain way because I waited and I shouldn’t be doing that,” he said. “I would be in a whole different spot if those two fights went my way. And it’s not the judges, it’s me. I should have pressed more and did more. And I’ve been thinking about that for the whole camp – if I would have changed it up a little sooner, it could be totally different right now.”

But there’s no time like the present, and a big win over Philippou on national television could do wonders for his growing profile in the division. And that’s precisely the plan.

“I feel like enough time has gone by since Carmont, so I think a win right now, especially against Philippou, would do good for me.”