Lorenz Larkin Takes a Look Back

"Right now, I just need to go back to what I love doing and not worry about all this other stuff." - Lorenz Larkin 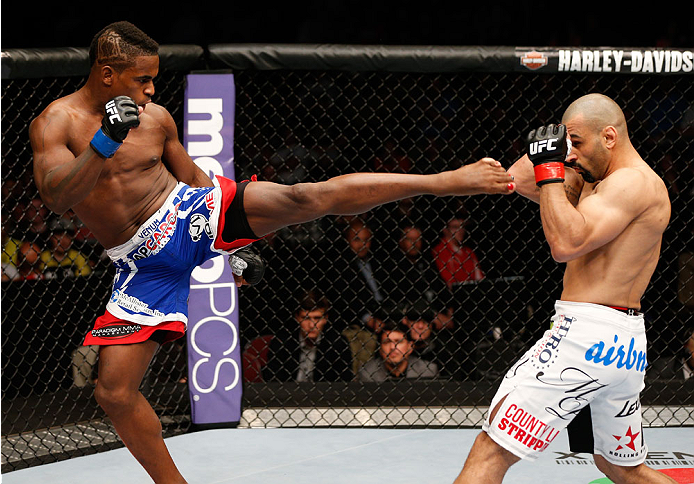 Wonder what Lorenz Larkin thinks of the inevitable questions about his upcoming bout with Derek Brunson being a must-win after losses in three of his last four fights?

“I haven’t heard them really because I haven’t been doing interviews,” he laughs. “I just want to fight, that’s it.”

Can’t argue with that logic, and as he approaches Saturday’s UFC 177 event in Sacramento, the Riverside middleweight is having fun again in the gym, and he’s looking forward to throwing down with Brunson in one of the most interesting matchups on the card. His trick? Going back to the way things were before he even put on gloves with UFC on them.

“I just wanted to keep it simple, and I want to get back to what it was like in the beginning,” Larkin said. “I really didn’t care so much about everything else back then; I just wanted to fight. The more I got into the UFC, the more everything was like ‘you beat this guy and you’re here; you do this and you’re here.’ And now, I don’t need to be worrying about all that stuff anymore. I need to go back to how it used to be.”

Call it a rejection of MMA math. There are no equations of Beating A, who beat B, now results in a fight against C. So when Larkin says he’s given up caring about such things, it’s not that he doesn’t care about the fight or about winning; it’s just that he’s going to embrace the fight for what it is, enjoy that, pick up his check, and then wait to get the call for the next one. Basically, he’s recapturing his love for the sport in its purest form, even though in reality, he needs a win after dropping back-to-back bouts against Brad Tavares and Costas Philippou.

He is well aware of that reality; he’s just not letting it put him in a spot where he’s more concerned about the result than the fight.

“I’m happy where I’m at and I don’t care about winning a belt right now or none of that stuff,” he said. “I just care about getting in there and fighting my ass off. Eventually it will take me wherever I need to go, but for right now, I just need to go back to what I love doing and not worry about all this other stuff.”

For Larkin, the last time he felt that way was more than two years ago, back when he fought for Strikeforce and stepped into the cage to meet up with a veteran contender named Robbie Lawler.

“I was just thinking that I watched this guy on TV when I was growing up and before I was even thinking about MMA,” he said. “And now I get to fight him. After the fight, I heard everything about it. But before the fight and in the fight, I was thinking of it more as an accomplishment.”

It was, as the still raw prospect dominated Lawler in his middleweight bout, winning a shutout unanimous decision. To this day, it’s the 27-year-old’s defining victory. Six months later, he was in the UFC, losing a controversial decision to Francis Carmont. He bounced back late last year with a win over Chris Camozzi, but the losses to Tavares and Philippou have put his back against the wall. And while he makes no excuses for his defeats, he does admit that being in the big show can often be a distraction.

“Yeah, I think it did (distract him) in some type of fashion,” Larkin said. “I think it would distract a lot of guys. It’s the totem pole effect. If you beat this guy, then you’re in this position. You used to not even think like that. I love fighting because it’s what I love to do. I’ve got the best job in the world, and there was a point when I wasn’t really thinking about the fight so much; I was thinking about where I was going to be.”

Not anymore. The only place he knows he’s going to be is in Sacramento on Saturday night against a fellow Strikeforce vet in Brunson.

“He’s an athletic guy, a good wrestler, and a good striker too,” he said. “Derek Brunson is no easy fight. He’s real tough, and I believe if he didn’t get tired, he would have beat Yoel (Romero). He was winning that fight, he was dominating that fight. He just kinda gassed out and Yoel was able to take advantage of that. He’s a top fighter in my head.”

“Fun, yes,” he laughs. “You might even hear it in my corner being yelled out.”