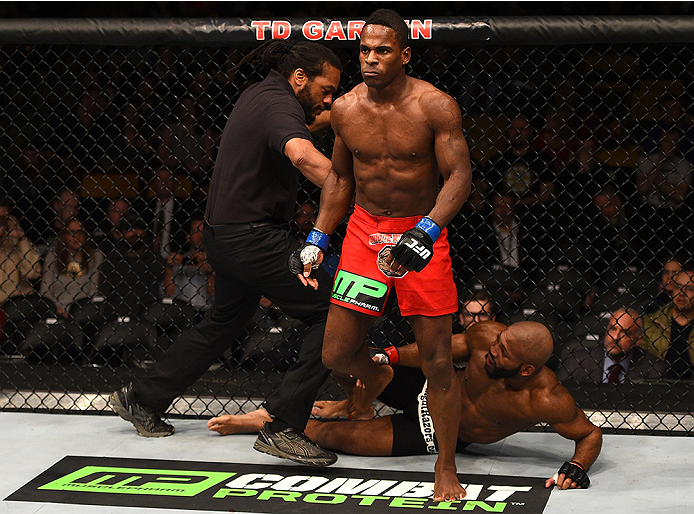 The old adage is that a UFC fighter’s first opponent is the scale and their second is inside the Octagon.

For newly minted welterweight Lorenz Larkin, there’s little to no concern about his upcoming opponent Santiago Ponzinibbio or making 170 pounds for the second time. No, “The Monsoon” has only one real issue - the plane ride to Hollywood, Florida for The Ultimate Fighter Brazil 4 Finale.

“I hate it,” Larkin laughs when asked about flying. “I absolutely hate it. I’ll tell you what the biggest problem of my camp is - the flight. That’s the biggest thing. I’ve had my manager calling me telling me it’s going to be all right. I don’t know about the other guys in the UFC, but I hate flying. The Boston fight was the farthest flight for me. That was like five hours and that was horrible. My first fight in the UFC, they gave me the option of fighting in Brazil or San Jose and I was like San Jose because it was a 45-minute flight. I hate flying with a passion. I try not to think about it too much. I don’t know, man. My gym is kind of near an airport, so on the way to the gym I’ll see planes landing and I’m just like 'ugh'. I hate flying.”

Arguably, no one was happier than Larkin to hear about the June 27 event relocating from Sao Paulo, Brazil to the Sunshine State. Air travel is still in the Southern California native and resident’s future, but, with less time in the skies, he can keep himself focused on his latest task: continuing to make a name for himself as a UFC welterweight. 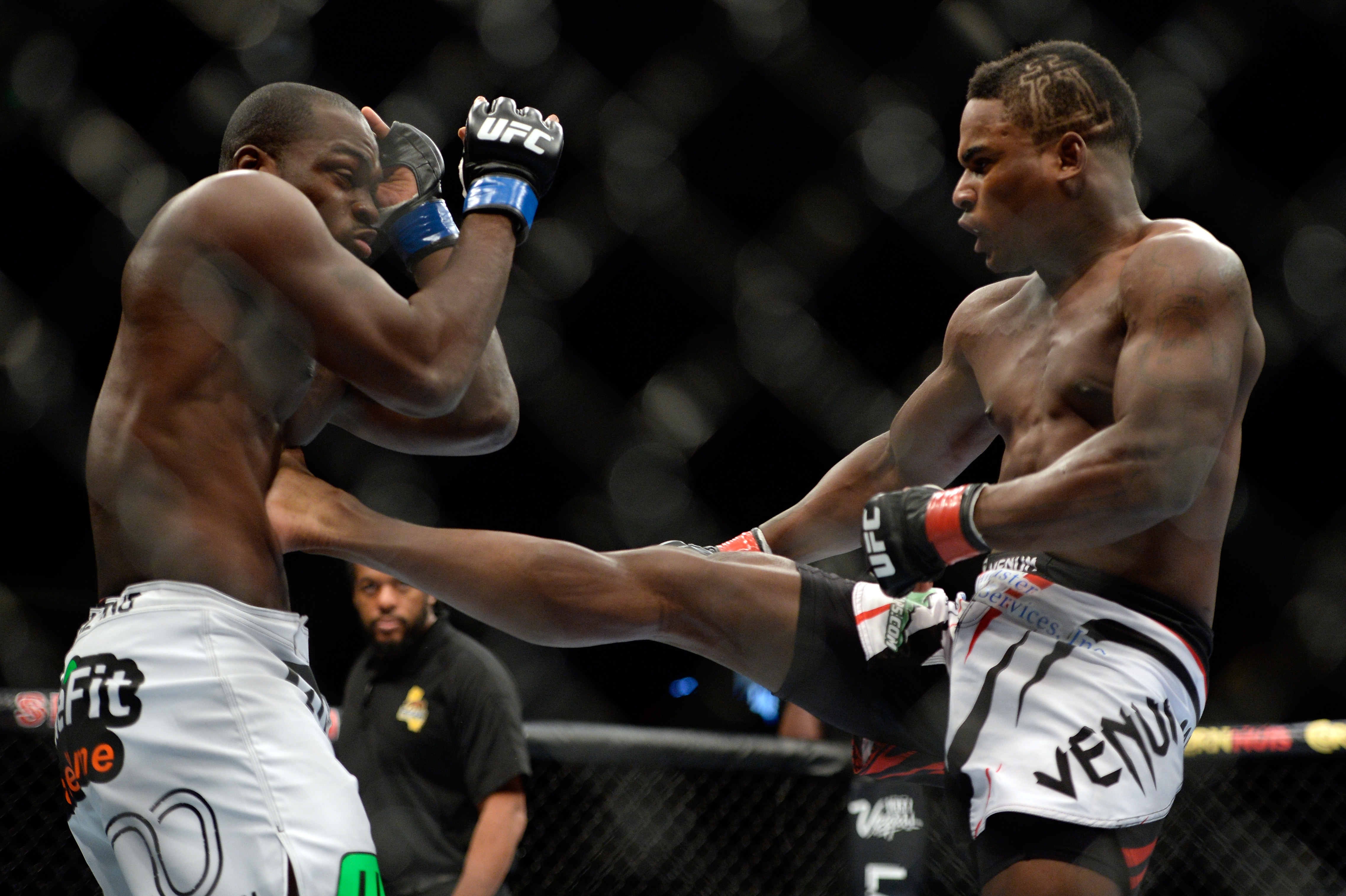 Derek Brunson in their middleweight fight at UFC 177 inside the Sleep Train Arena on August 30, 2014 in Sacramento, California. (Photo by Jeff Bottari/Zuffa LLC)" align="right" />

In January at UFC Fight Night: McGregor vs. Siver, the 28-year-old scored a first-round knockout over Muay Thai specialist John Howard and earned a Performance of the Night bonus in his divisional debut. After years competing at heavyweight, light heavyweight and middleweight, Larkin stopped being stubborn, made a real cut to 170 pounds and improved his pro record to 15-4 with 1NC . The move may have been specifically exacerbated by his recent three-fight losing skid, but this had been a talking point for years for Larkin, who was routinely battling bigger men.

“In my whole career, I’ve always had to fight the perfect game,” he said. “Most of all the guys I’ve fought, especially on the big shows, the guys have been bigger than me. I’ve always felt like if I’m against the cage, I can’t physically move these guys. I have to wait for them to make a mistake and then capitalize on it. I was always defend, defend, defend. I was never able to move off the cage until they made a mistake then I could get out. With my last fight, it was the determining factor. He (Howard) pushed me against the cage, I grabbed his arm and I just shook him off. I was like, ‘Oh my God!’ I felt like the big guy for once.”

The KO finish in the opening round was the striking ace’s ninth in his career, but his first stoppage win in almost four years. Larkin’s feet looked light in their movements and his hands looked heavy in their power as he scored a knockdown and more than a couple dozen significant strikes in the process against the veteran Howard. By and large, the action inside the Octagon was smooth sailing for Larkin, which was matched by the relative ease of his first major weight cut.

“It’s weird to say, but I feel like that was really my best weight cut,” Larkin said. “Maybe because I was so much on my weight, paying attention to it. When it came down to the day of weigh-ins, I only had three pounds to lose in the sauna. I spent like maybe 15 minutes in the sauna. Actually, I stayed in a little longer, so I could cut a little more, so I could actually drink on the way to the weigh-ins. I felt comfortable. I was drinking water on the way over to weigh-ins. I put the fluids back on pretty good too. I think I weighed-in at 185 on the day of. I felt good.”

Up next, The Monsoon aims to storm the shores in Florida as Larkin takes on Ponzinibbio. The TUF Brazil 2 semifinalist has recently earned back-to-back wins inside the Octagon with a knockout of Wendell Oliveira and a unanimous decision over Sean Strickland, who is a teammate of Larkin’s. With an impressive 21-2 pro record, Ponzinibbio is a fan favorite in his native Argentina, as well as Brazil, with his ultra-aggressive approach. “Gente Boa” will be looking to make more fans in a probable striker’s duel with Larkin in Ponzinibbio’s first bout outside of South America.

“He’s good,” Larkin said. “He likes to strike. I’ve seen some of his ground game. He’s tough. He’s durable. He likes to fight, he likes to bring the fight to you. He fought my teammate in his last fight, so I’ve seen that fight and got a little insight on him from that. That’s how they fight down there - nose down, chin down and coming at you. If fans have seen me fight, then they’re already excited about this fight.”

In preparation for Ponzinibbio, Larkin has been busy training at his home gym, Millennia MMA in Rancho Cucamonga, CA. “I’ve been working on my wrestling for quite a while now and I think I’ve evolved a lot, but I really haven’t shown it or other things I’ve been working on in my fights,” Larkin, whose two MMA head coaches are both grappling experts in Betiss Mansouri and Romie Aram, said. “Instead of just fighting defense on wrestling and jiu-jitsu, I should fight offense. I’m going to stick with what I know, but I’m trying to display things that I’ve been working on for a while now.”

This Saturday, Larkin will take any and all flying frustrations out on Ponzinibbio in hopes for another big welterweight win. “I’m going to bring it like any other fight,” he said. “You have one win in a weight class, it doesn’t define you in that weight class. It takes a couple wins, then people start to realize he’s not going anywhere and he’s someone that we’re going to have to deal with at this weight class. I’m going in to win and I’m going in to make some noise in this division.”