With mixed martial arts on television nightly and UFC deals with corporations such as FOX Sports and Reebok making headlines, it’s often easy to forget the struggle many fighters go through to get to the Octagon, and what a life-changing event it is once that day comes.

So even though fighters who compete for the Ultimate Fighter crown in the United States think of making it to the sport’s biggest stage as the first step to glory and riches, often those who participate on international versions of the reality series have very different goals.

Take Dileno Lopes for example. The bantamweight representative for Team Shogun fighting for the Ultimate Fighter Brazil title against Reginaldo Vieira this Saturday in Rio de Janeiro is 19-1 as a pro and given that record and his level of talent, it was inevitable that he would one day grace the Octagon. But as he prepares for the biggest fight of his career, his thoughts are only what a win this weekend would do for his family.

It’s as selfless an attitude as you can find, and in addition to fighting being a way out for Brazilian athletes looking for better lives, The Ultimate Fighter has proven to take that idea up several notches, as it quickens the process for those who have the talent and determination to make it through the tournament.

“To me, this (TUF) is like forcing the door open to a new life story,” Lopes said. “Everyone dreams of this in Brazil and believes they are the right one.”

Making it to TUF and then through six weeks in the house isn’t a given though. Lopes, despite his stellar record and top-notch training with the Manaus branch of the Nova 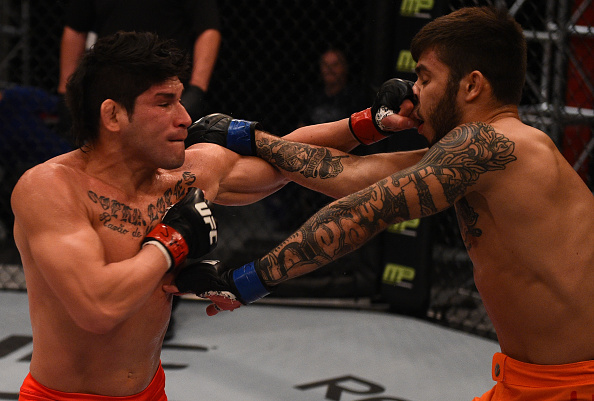 Uniao team, still had to win a fight over Renato Monaco to get into the house, then spend nearly two months away from home in Las Vegas and win two more fights to make it to this point.

“It was very important to have lived a new experience in the TUF house and I am very happy for it,” he said. “I learned a lot being there and living with other people, but the most difficult part for me was the distance (from home) and not having communication with family. You’re confined inside the house, wondering about the family’s news. I wanted to talk to my wife and I missed my daughter, wondering if everything was okay with them.”

A former TUF coach, Chael Sonnen, described it as the toughest tournament in sports, and in a lot of ways he’s spot on with that assessment. But at least one stressor was removed from TUF Brazil, as the lack of interpersonal drama was at a bare minimum, letting the fighters concentrate on their training and their fights.

“We had a lot of respect for each other,” Lopes said. “We all had one goal for the show, which is being champion, and all of us were well prepared psychologically and focused on what we were doing there.”

Lopes’ group on Team Shogun may have been even better prepared, as they roared through the competition, putting six squad members in the eight semifinal slots before Team Nogueira was able to get two fighters in Saturday’s two final bouts. The 30-year-old Lopes gives a lot of credit to team coach Mauricio “Shogun” Rua for the team’s performance.

“It was great to have this immense opportunity to work alongside the legend ‘Shogun,’” he said. “He is a great fighter and captain, and I was very happy when he called my name to be on his team. He is a great inspiration as a fighter, and it was an honor to have him as captain on TUF Brazil 4.”

Lopes will be back with his usual team this Saturday on the highly-anticipated UFC 190 card, and it’s business as usual for the Manaus native, who has won six straight leading into the bout with Vieira, three by knockout, one by submission. So he can get rid of you with strikes (four) or submissions (12), and it’s this versatility that makes him dangerous.

“I have an unpredictable style because one time I can knock out my opponent or I can submit them another time,” Lopes said, but ultimately, it doesn’t matter how he gets the job done, as long as it finishes with his hand raised. 19 times in 20 fights that has been the result, and despite a long wait, he’s here now and expecting to keep his place for a long time.

“I always believed that one day I would have my chance and my time,” he said. “And this time has arrived and it’s my turn to compete in the world's biggest event, the UFC.”