A look into a rivalry's history: Jedrzejczyk vs Gadelha 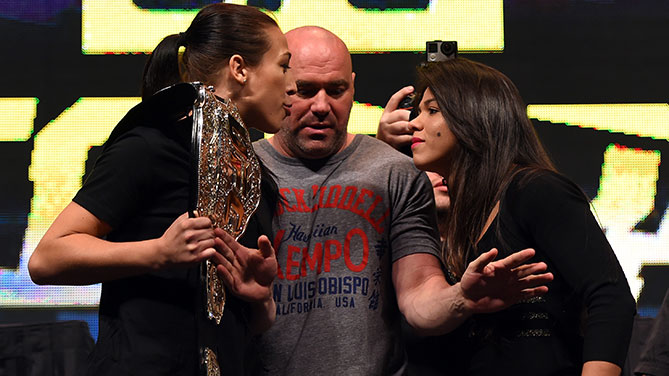 One of the Octagon’s biggest rivalries is between two of its smallest fighters.

On July 8, UFC women’s strawweight champion Joanna Jedrzejczyk will defend her belt against No. 1 contender Claudia Gadelha in the main event of The Ultimate Fighter 23 Finale.

The gold that is up for grabs is only half the story of this fiery feud, which began more than a year and a half ago when Jedrzejczyk and Gadelha fought to a razor-thin split decision at UFC on FOX: Dos Santos vs. Miocic. The judges’ nod to Jedrzejczyk kept her undefeated and gave Gadelha her first and only professional loss.

Plus, before these strawweight superstars lay hands on each other in this highly anticipated rematch, this season of The Ultimate Fighter gave fight fans front row access to the verbal sparring and mental warfare of Gadelha and Jedrzejczyk as they competed as the opposing head coaches.

Understanding this heated rivalry is about understanding the short, but exciting, history of the UFC’s women’s strawweight division. In December 2013, the UFC announced the creation of the 115-pound weight class and The Ultimate Fighter 20 season, which would crown the inaugural strawweight champion at the conclusion of the 16-woman tournament.

Eventually, Carla Esparza and Rose Namajunas won their way into the finals and Esparza secured a third-round rear naked choke of Namajunas at the TUF 20 Finale in December 2014 to become the first UFC women’s strawweight champ.

While the TUF 20 season was set to give the division its first title owner, the UFC signed several other top strawweight talents to tangle inside the Octagon before the season ended in order to begin fleshing out the rankings and to find a number one contender for whoever that first champion would be.

Two of those signees were Gadelha and Jedrzejczyk.

Along Atlantic City’s boardwalk in July 2014, the then-undefeated Gadelha, who was already highly regarded outside of the Octagon to followers of the weight class, took on Tina Lahdemaki in the first UFC women’s strawweight bout. The Brazilian bullied the Finn to a unanimous decision with Claudinha’s trademark takedowns and ground-and-pound. 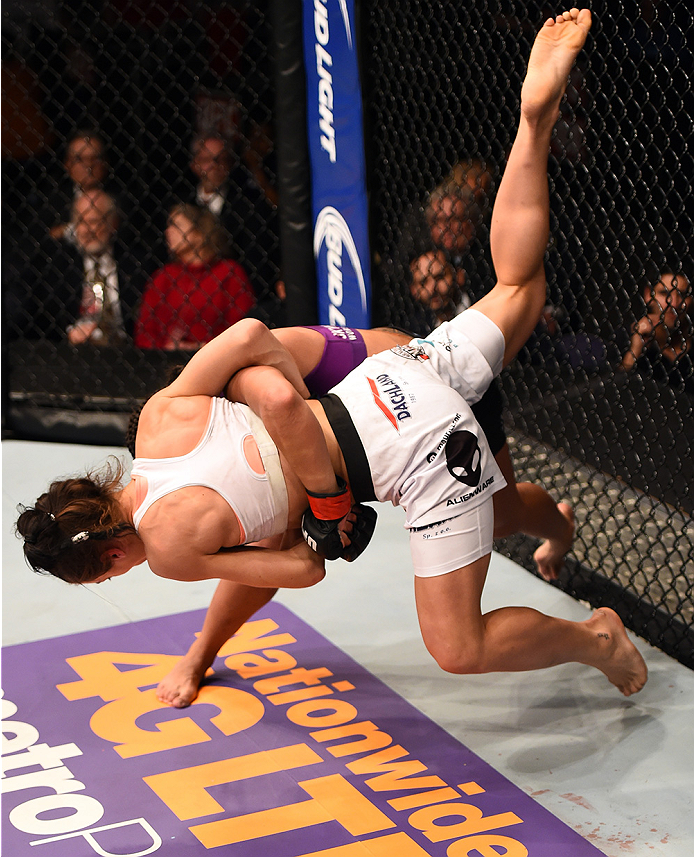 Stars appeared to be aligning once again for the anticipated matchup of Gadelha versus Esparza, as the latter made it to the TUF 20 finals set for December 2014. Gadelha was scheduled for a bout the very next night at UFC on FOX: Dos Santos vs. Miocic against a former kickboxer from Poland who was also undefeated with one win inside the Octagon.

Then the upset happened and everyone scrambled to learn how to pronounce Jedrzejczyk.

Just ten days after Gadelha made her UFC debut with much fanfare and media coverage, a multiple-time Muay Thai champion in her native Europe made her Octagon entrance with a unanimous decision win over Juliana Lima at UFC on FOX: Brown vs. Lawler.

The victory saw Jedrzejczyk stuff 13 takedown attempts and outland her opponent nearly 3 to 1 in significant strikes. More than anything, what people took note of most was Jedrzejczyk’s intense weigh-in staredown. People had their mind made up that Gadelha would be the first UFC strawweight title challenger and, simply put, that Jedrzejczyk was just in the Brazilian’s way.
RELATED CONTENT: Gadelha talks rivalry | Highlights from UFC 200 press conference | WATCH: Things got heated at Unstoppable presser

In Phoenix that fateful night in December 2014, Jedrzejczyk would prove she is no one’s stepping stone in the very first round. Jedrzejczyk would successfully defend four of five takedown attempts and score a knockdown of Gadelha. It was crystal clear who was in control of the opening five minutes and, from there, Claudinha was fighting from a deficit.

The second and third stanzas would be much closer, thus making for the murky split decision ending. Gadelha would land six takedowns across the remaining ten minutes, but she wasn’t able to keep Jedrzejczyk down to employ her signature ground-and-pound. Jedrzejczyk would continue to land more significant strikes on the feet, but it wasn’t by a lopsided margin and she did not stagger or drop Gadelha in those two rounds.

It didn’t escalate into anything then, but Gadelha did land a punch to Jedrzejczyk’s face after the final bell. The referee jumped in and Gadelha immediately apologized, but, in retrospect, there was a palpable intensity even before the controversial decision was read.

Three months after the win over Gadelha, the former kickboxer from Poland took the MMA world by storm in the co-main event of UFC 185 with a one-sided beatdown of then-champion Esparza. 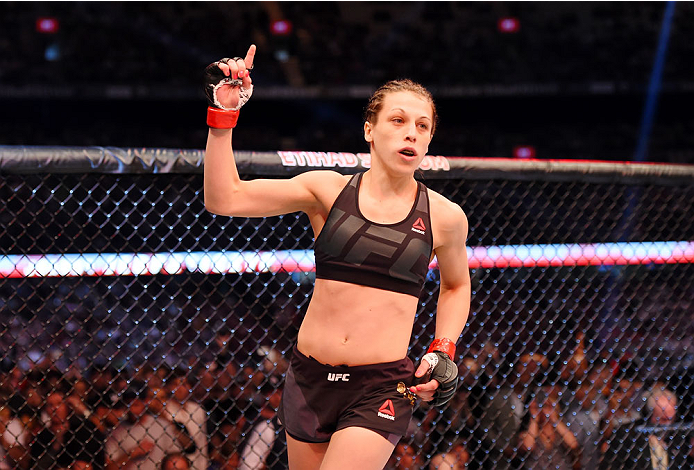 En route to a Performance of the Night-netting second-round TKO, Jedrzejczyk defended 16 of Esparza’s 17 takedowns and landed an incredible 53 significant strikes to her opponent’s four. Jedrzejczyk was a never-ending conveyor belt of kicks and punches with all the moxie and attitude to grab fight fans’ attention.

If that wasn’t enough of a star-making moment, Jedrzejczyk would make her first UFC strawweight title defense in a short notice main event against TUF 20’s Jessica Penne in Germany just three months later. Joanna Champion would deliver an equally one-sided beatdown to Penne as Jedrzejczyk did to Esparza with a third-round TKO.

As Jedrzejczyk won the belt and defended, Gadelha geared up for her Octagon return and to get back to the top of the rankings in a strawweight title eliminator. Last August at UFC 190 in her native Brazil, Gadelha handed out a drubbing of her own to the ultra-tough Jessica Aguilar.

To get back on the winning track, Gadelha stung Aguilar over and over with straight punches from long range to earn a unanimous decision win against Aguilar, who had been on a 10-fight win streak, including wins over Esparza and famed Japanese fighter Megumi Fujii. 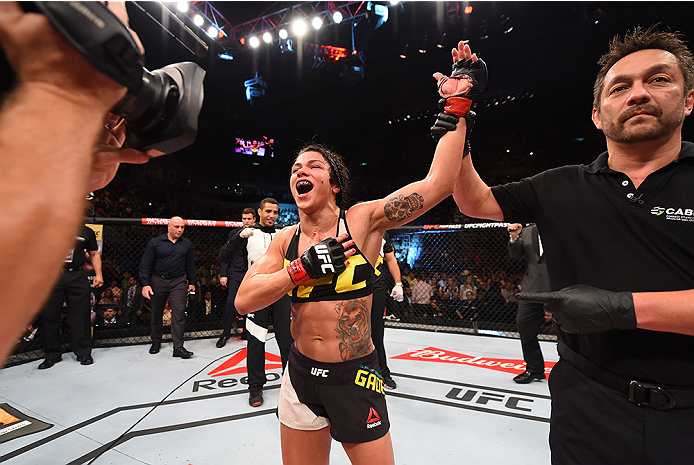 Finally, Gadelha had her UFC title shot. Unfortunately, Gadelha suffered a hand injury, which allowed an opening for a new challenger to step in - Valerie Letourneau.

To make the Gadelha rematch possible, Jedrzejczyk needed to defeat her UFC 193 challenger Letourneau in the co-main event in Australia. The five-round slugfest would be a lot closer than Jedrzejczyk’s previous two wins, but Joanna Champion reigned supreme, landing 220 significant strikes (including a UFC record 70 leg kicks) en route to a unanimous decision win.

In January of this year, the UFC announced that Jedrzejczyk and Gadelha would not only settle their score with the belt on the line, but they would be rival coaches on TUF 23 season.

Two months later, fight fans got to see how far this feud had come as Jedrzejczyk and Gadelha were a powder keg set to explode at the UFC Unstoppable press conference on March 4, and the rivalry only escalated during the taping of TUF 23.

Now, we wait with bated breath for the rematch, as UFC strawweight champion Jedrzejczyk clashes with top contender Gadelha at The Ultimate Fighter 23 Finale on July 8.