"This fight is less stressful. I was able to go in there and work on new
things instead of just being stressed about all that other stuff." - Chris Weidman 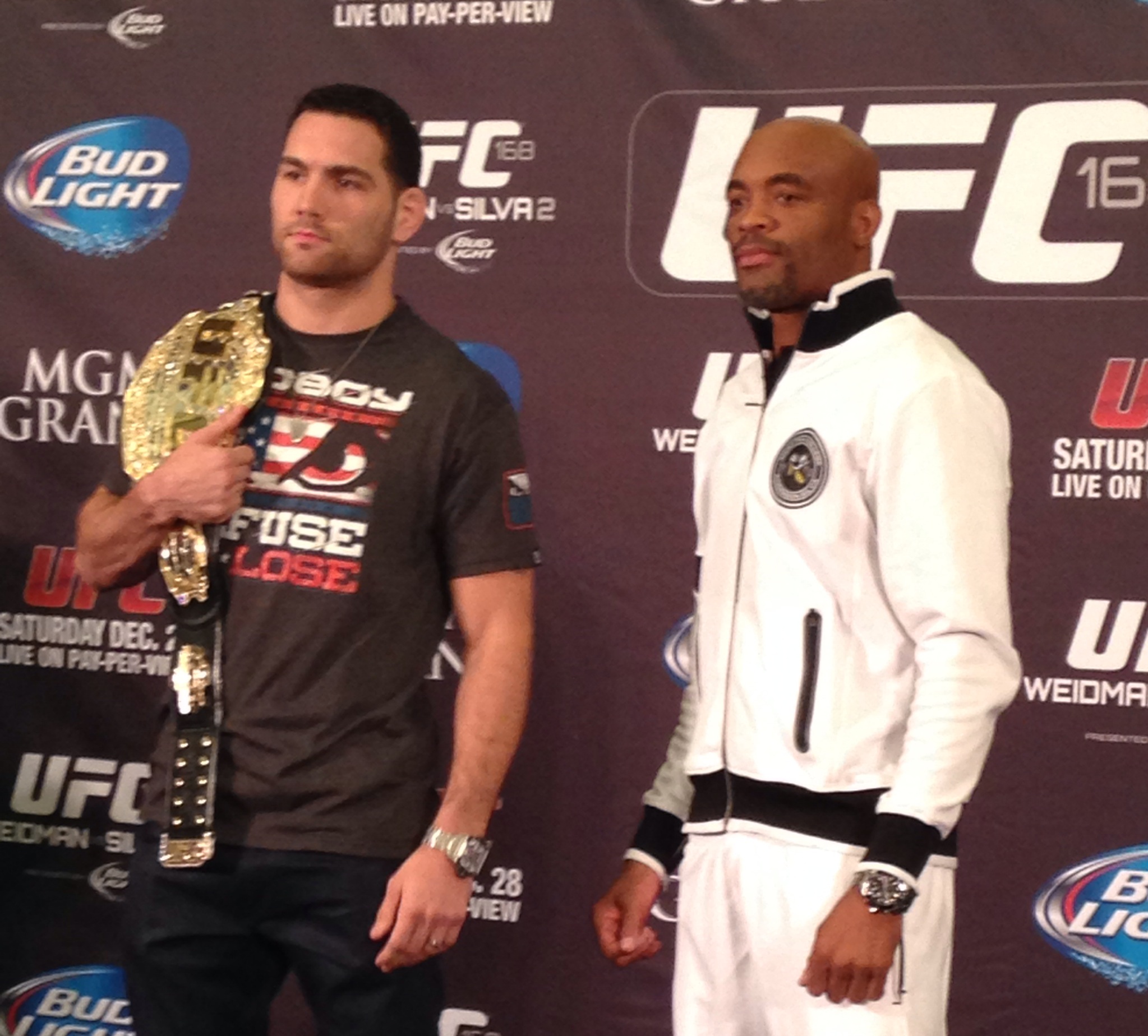 LAS VEGAS, December 26 – At the start of Thursday’s UFC 168 pre-fight press conference at the MGM Grand, the only way you could tell the middleweight champion and challenger apart was that the title belt sat on the table in front of a stone-faced Chris Weidman, who looked tense, as if in the role of contender once again.

Meanwhile, Anderson Silva, in the challenger's role for the first time since 2006, smiled, joked, and looked like a confident champion heading to Disneyland in two days, not a pivotal prizefight against a man who knocked him out and took his title back in July.

But looks don’t always tell the tale, and as the presser went on, Weidman began to crack a smile or two, admitting that as opposed to the lead-up to the first fight, this one has him in a much better state of mind.

“It kinda feels similar, but there’s just a lot less stress in this camp,” he said. “The last camp I was rehabbing my shoulder at the beginning of it, trying not to hurt it. I knew it was going to be the biggest fight of my life, and I couldn’t get injured and I needed to get as much sparring as possible because I was going to deal with some rust, and there was just a lot of stress to get all that off. This fight is less stressful. I was able to go in there and work on new things instead of just being stressed about all that other stuff.”

Weidman coach Ray Longo concurs, saying that his charge is “pretty loose” while noting that even though Silva may have appeared to not have a care in the world, it may just be some pre-fight gamesmanship.

“You noticed there were no antics this time,” said Longo. “Maybe he thinks that didn’t work (the last time), so he’s trying a different tactic. Maybe he’ll give the relaxed tactic now.”

At this point in his career, with all he’s seen over the course of years in the fight game, you’ve got to assume that nothing surprises Longo anymore, but he did admit to being taken aback a bit by questions directed at Silva about a future fight with Vitor Belfort and even a much discussed boxing match with Roy Jones Jr.

“I look at that stuff and go ‘wow, that’s kinda ballsy talking about Roy Jones,’” said the Long Islander. “I said before, Anderson Silva can’t beat Chris in a boxing match, and I believe that. I think Chris would destroy him in a boxing match; it doesn’t go the distance. So is it mind games (from Silva)? I don’t know. But Chris is focused on the fight, and I think that’s why he’s where he’s at. He knows the difference between the BS and the reality, and he sees through all that.”

Maybe that’s the reason for the no nonsense demeanor Thursday. Weidman is here on business, and Saturday’s business is to retain his title and put the name Anderson Silva in his rearview mirror. But to do that, he needs to not look at the first fight and automatically expect a repeat. Longo isn’t concerned about his fighter’s focus leading into the highly-anticipated rematch.

“That’s him anyway, and he wants to prove he’s the best,” he said. “We looked at the tapes and saw some things that could be different and we try to look at what Anderson can do different. So it is a little tough, but I think we’re going to see a more confident Chris Weidman, and that’s a scary thought.”

And if all else fails, there is always the idea of what some have called the “Ray Longo Curse,” which has seen him lead underdogs Weidman and Matt Serra into battle and emerge with UFC championships. Weidman already has the belt, but oddsmakers have him as an underdog against the future Hall of Famer from Brazil. So is the curse real?

“I have my own curse, like from New York (Yankees) to Boston (Red Sox)?” he laughs. “Whatever it is, if it’s a positive thing, I’ll take it.”