The Long Wait Over, Bedford Aims For The Next Step

“I'm a complete mixed martial artist. If it goes to the ground it will
be exciting there too. I plan on moving forward and I plan on getting
another dominating win.” - Johnny Bedford 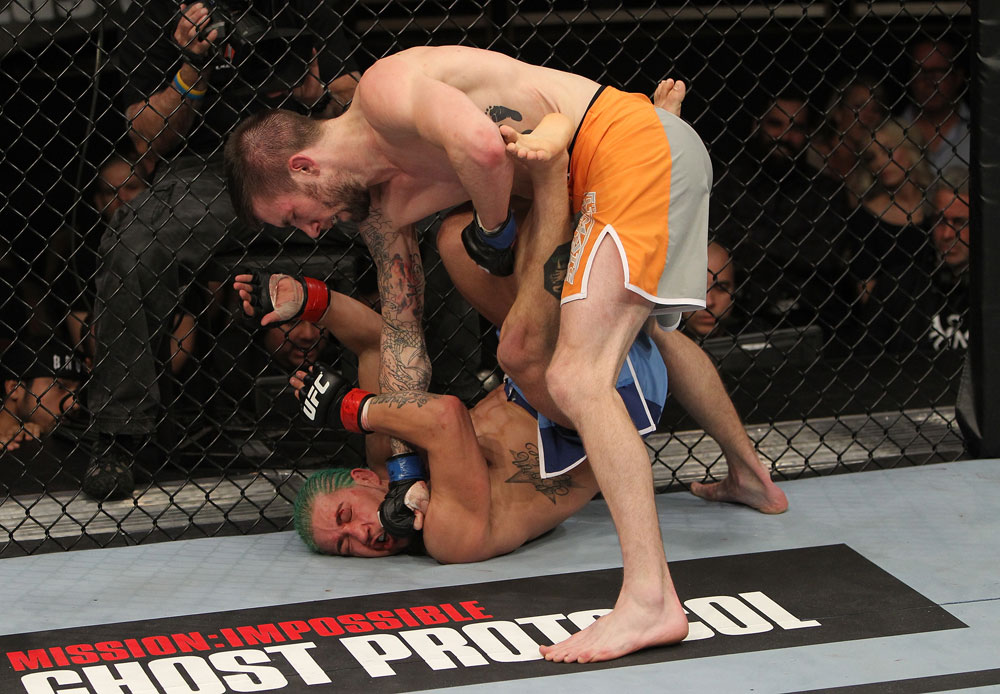 Whether it takes a fighter 10 weeks, 10 months or 10 years to make their Octagon debut, that one bout is only the beginning of their new and much more challenging career as a UFC fighter. The UFC is both the end of one journey in obscurity and the start of another in the limelight against the elite. Every MMA fighter outside of the UFC is trying their hardest to get inside it, but once they do, they revel in the uphill battle to maintain and ascend their position among the sport’s best. No one is more excited for the tough sledding ahead than “Brutal” Johnny Bedford, who premiered inside the Octagon last year and plans to make his mark in it in this one.

“This is my year,” declares Bedford. “2011 was a great year, but this year is my breakout year. This is the year I get to show that I'm one of the best in the world. I plan on fighting hopefully three or four times and winning. I work with a sports psychologist and he called it in December 2010 before I fought Frank Gomez, which was the first fight we worked together on. I ran right through Frank and he said, ‘This is the beginning Johnny. 2011 is going to be your year.’ In 2011, I got onto the show, I did well on the show - I would have liked to have done better - and I had a big win on national TV at the finale. This is not going to stop. I'm training hard, I'm training smart and I've got great training partners here in Texas. I'm ready to get this win. I'm ready to stay active, stay healthy, to keep improving and to win.”

At 29 years old, the Ohio native was every bit his nickname in his first official UFC scrap at The Ultimate Fighter 14 Finale against fellow housemate Louis Gaudinot. On a card stacked with bantamweight action, Bedford’s bullying beatdown of the now 5-2 Gaudinot was arguably the most complete performance of the night. From the standup to the ground work, he was in total control of every frenzied second, leading some judges to score the two opening rounds both 10-8 in Bedford’s favor. As far as statement fights go, he showed no hesitation or jitters in dispatching his opponent and looked ready for all comers.

“It went exactly as I planned,” states Bedford. “I wanted to control all aspects of the fight. I went in there on a mission to secure my job and to secure my future for my family. I wanted to go in there and be dominant and put on a good performance. It wasn't personal, but I wanted to beat him up. It was a lot more dominant than I thought it would be. I did expect to win the fight handily, but after watching the fight it was like he didn't fight back. It was crazy to watch. It was definitely very one-sided. It set the stage for me moving forward in the UFC and I was blessed to be chosen to have the fight televised.”

The end of the onslaught and fight finally came via TKO (knees to the body) at 1:58 in the third round. Bedford attacked Gaudinot’s midsection throughout the bout with knees in the clinch, body punches and more knees and more punches to the body when on the ground. The final exchange was a knee to the stomach that dropped Gaudinot, which led to vicious soccer-style kicks to the belly and another smattering of knees. This devoted and sustained destruction of the torso was reminiscent of a highlight reel from boxing great Miguel Cotto.

“My boxing trainer-slash-manager, Rafael Casias, would say it is all him,” tells Bedford. “He's going to take credit for it and I'm going to give him credit for it. He jokes around that I fight like a Mexican fighter. At the gym here, I'm known to go to the body. I'll get your hands up with punches and as soon as you bring your elbows up I'm looking to go to the body. For people who may not understand the fight game or who haven't been hit in those areas, it is the worst spot. I would much rather you punch me in the face than in the body - it takes the fight right out of you. I'm known in this small area in Texas for doing it and in that fight with Louis it was the first MMA fight I really got to capitalize on it. I've always wanted to do that and it is always the gameplan to go there when they raise their hands up a little bit, but it has never opened up like it did in that fight. I did it perfectly. I loved watching that fight because I was cutting angles and ripping shots to the body and you could see the fight just falling out of him.”

Besides being his manager, cornerman, and the man instructing him to throw knuckle sandwiches to the bread basket, Casias also owns a gym with Bedford named Fitness Fight Factory in Colleyville, Texas. “Here in Texas, I say this all the time and I truly mean it, we have one of the best and deepest most talented training camps in the country for the 145 and 135 pound fighters,” asserts the 18-10-1 Bedford, who hones his aggressive edge with Casias in the Lone Star State gym with a gang of 145 and 135 pounders including UFC and WEC veteran Will Campuzano. “I think Team Alpha Male would be considered the number one gym because Joseph Benavidez, Chad Mendes and Urijah Faber are all great and big names. But other than that, I don't think there is a more stacked 135 or 145 pound room when we all get together and beat the crap out of each other.”

Up next for Bedford is a January 28th tussle in the Octagon with the submission savvy Mitch Gagnon at UFC on FOX 2 in Chicago, Illinois. Less than two months following his debut, Bedford is ready for more fisticuffs, not only to keep his momentum going, but he is also expecting his second child with his wife in early April. It’s good news for the Bedfords, but bad news for the 8-1 (all submission victories) Gagnon, whose first UFC fight will be against the surging Ohio native.

“Gagnon's pretty good at hiding video, but the little I do know about him is that he's not that fast wrestler type who is going to shoot for that double leg,” says Bedford. “He's going to look to clinch with me and overpower me with that bear hug and all that under-over stuff. All of that completely falls into my gameplan because wrestling is my home. I wrestled my entire life and I was never that fast type of guy. I wanted to get a hold of you, get into the clinch and that's where I'm good from. This guy trying to get a hold of me and trying to take me down, it's going to excite me - I welcome it. Try to turn it into a wrestling match. He's going to get boxed up coming forward and once he gets into the clinch he's going to be surprised, feel how good I am there, be put on his back, and panic, in my opinion.”

Being a UFC fighter, even one that is so far only 1-0, affords one certain opportunities, and Bedford took advantage of a big one during the first week of this month. In preparation for his bout with Gagnon, the former Cleveland State University wrestler flew to Denver, Colorado to train with three world class level fighters and wrestlers: Scott Jorgensen, Joe Warren and Stephen Abas. Jorgensen is a household name for UFC fans, consistently holding a place at the top of the bantamweight pack. Warren is one of the most heavily decorated Greco-Roman wrestlers as well as a fighter sporting a 7-2 MMA record. As for Abas, he’s simply the three-time NCAA Division I National Champion of wrestling out of Fresno State University.

“It was just an awesome week of training with guys who are at the top like that,” says Bedford. “It was humbling for sure, but being with these guys and doing well against them made my confidence go through the roof. Those are also relationships that I built there that I hope to continue in the future and train with those guys again. It shows what the UFC does and did for me. It was a breakout year for me last year becoming a household name and developing a huge following. It's finally coming altogether. In 2010, I don't know if I could have seen that I was going to be 1-0 in the UFC and fighting again in January 2012 and being called out by top level guys to go train with them. I'm honored to be in the room with those guys and with that being said I think I can compete with them. I think I've always known that I could compete at this level and now I have these opportunities to take full advantage of them.”

This Saturday at the United Center in Chicago, Bedford will square off with Gagnon in search of his second win inside the Octagon. “I plan on boxing his ears off and cutting angles and making him hate his life out there,” affirms Bedford, who wants to be victorious in all facets of the fight and move another step forward in the bantamweight ranks. “I'm a complete mixed martial artist. If it goes to the ground it will be exciting there too. I plan on moving forward and I plan on getting another dominating win.”

If 2011 was only a preview of Bedford’s in-cage abilities, then this year will be a “Brutal” one.