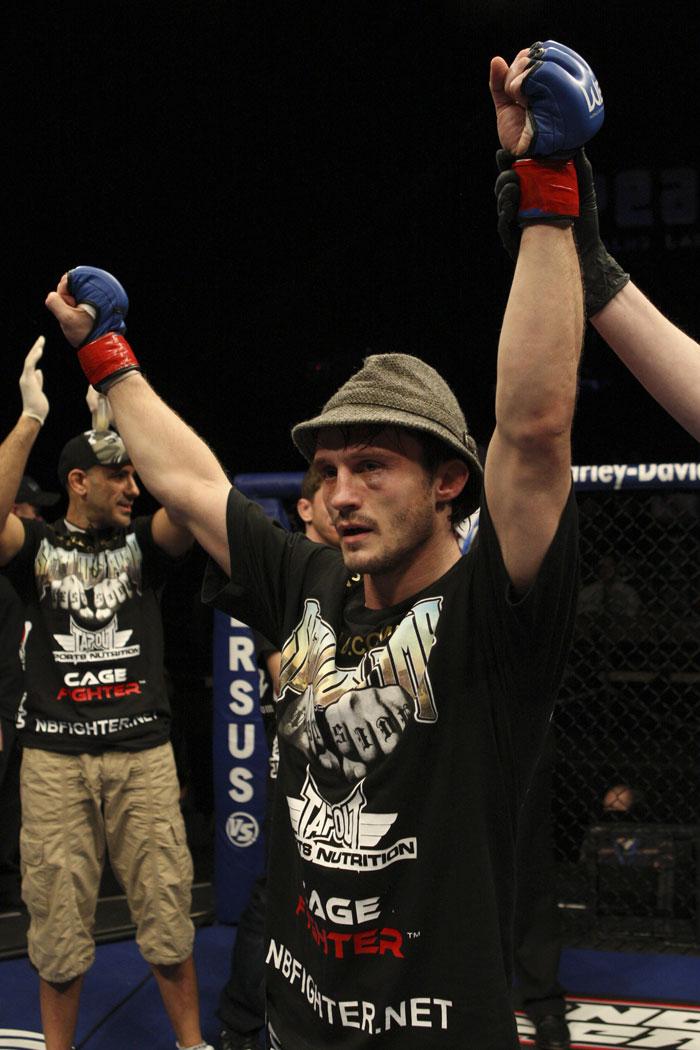 Brad Pickett, professional mixed martial artist, sees the fight game the same way we see him fight. There’s no nonsense, just a desire to get down to business as soon as possible. So the response you get when you ask him about his UFC 138 co-main event against Renan Barao and what a win would do for his career is no shocker.

Can’t make it any clearer than that, and that ability to whittle away all the extraneous stuff and get right down to the heart of the matter has served the 33-year old well throughout his nearly seven year pro career, one that began in his native London in 2004 and that continues this weekend in Birmingham.

And in between his 17 second TKO win over Stuart Grant and his upcoming clash with the 28-1, 1 NC Barao, Pickett hasn’t had anything handed to him; in fact, as a lighter weight fighter, he fought through the same obstacles that United States fighters in those same divisions did in the days before the Zuffa-era WEC brought them onto the world stage.

“When I was fighting in the UK, I was only fighting at featherweight,” said the current bantamweight contender. “But it was still the same thing. And people get the small man’s syndrome when you see a lot of heavyweights getting a lot more attention and money and stuff like that, and you’re thinking man, if anything, I’m more skilled than these guys, because we have to rely a lot on technique rather than just strength, so yeah, it does get a bit disheartening and annoying at times, but it’s just how it is, and hopefully that will change. In boxing, it’s starting to change where people are a lot more interested in people like Manny Pacquiao and (Floyd) Mayweather than they are in (Wladimir and Vitali) Klitschko. So hopefully, that will start to change, and with the UFC giving us the platform to show our skills, eventually in time that could be the case as well.”

The only problem for Pickett is that the other eight members of the aforementioned group have already displayed their skills on the UFC level. Pickett, 3-1 in the WEC, has yet to make it to the Octagon. Instead, a back injury has kept him on the shelf since his win over Ivan Menjivar last December, forcing him to scrap a UFC 130 bout with Torres. Stepping in for Pickett was Johnson, who went on to win the fight and move on to a title fight against Cruz. Pickett, who scored a WEC win over Johnson, doesn’t play the What If game though.

“Any guy you beat, you want them to go on and do well because it makes your win look better,” said Pickett. “If you beat a guy who’s 5-0 and he loses 20 fights in a row, it doesn’t look like a good win. So obviously you want your guys to win and go on a tear, and the guys I’ve been beating have been doing that. And I’m not bitter.  A lot of people say to me, ‘you should be there and not Demetrious Johnson,’ and I say ‘hey, I got injured.’ If I would have fought Miguel Torres and beat him, I could have been in that position, but I’m not, and I’m glad that Demetrious Johnson got the shot. I can’t complain about things that are out of my hands; I can’t control that.”

What he can control is his own destiny, which means getting back in action and beating Barao on Saturday. But even with the bout drawing nearer, Pickett (21-5) appears to be the superstitious type, not wishing to speculate about the fight until the fight happens.

“I don’t want to tempt fate,” he laughed when interviewed on October 25th. “I still have a week of training left, and you never know what can happen, so I still could be the last (WEC fighter to fight in the UFC) if something stupid happens, but hopefully not.”

Well, he’s made it to Birmingham and survived the jokes of friends and family that told him to cover himself in bubble wrap to avoid any late mishaps, but has his recent injury forced him to adjust his all-out style of fighting and training?

“You can’t do that,” said Pickett, a member of Coconut Creek, Florida’s American Top Team. “I think the type of fighting style I have will never let that happen. It’s just how I am – I have to go all out. But I’m listening to my body as well. If I was aching a little bit, I had to step back, and it made me a lot more wiser. It’s very cliché to say this, but I do feel like I’m in the best shape of my life, just because I’ve had to start looking after my body a lot more than I had to. I had to realize that I’m 33, not 23, and I had to start looking after my body, eat the right sort of foods, take supplements, and rest, as well as train hard.”

All that’s left is the fight, and it’s finally all systems go for Pickett, who could see this whole layoff as a blessing in disguise since he is returning in a co-main event in his home country. Yet “could” is the operative word.

“Good things come to those who wait, I guess, and I’m happy to be able to fight in England and being in the co-main event is massive to me,” he said. “But I don’t want to get too carried away because it hasn’t happened yet. Until the cage door shuts and I turn around and look at my gloves and they say “UFC” on them, I haven’t yet made my debut.”