At Long Last, Condit Gets His Shot

"I’m stoked to be finally stepping out there to do what I’ve been
training to do for the last six months: to go out there and fight,
compete to the best of my abilities." - Carlos Condit 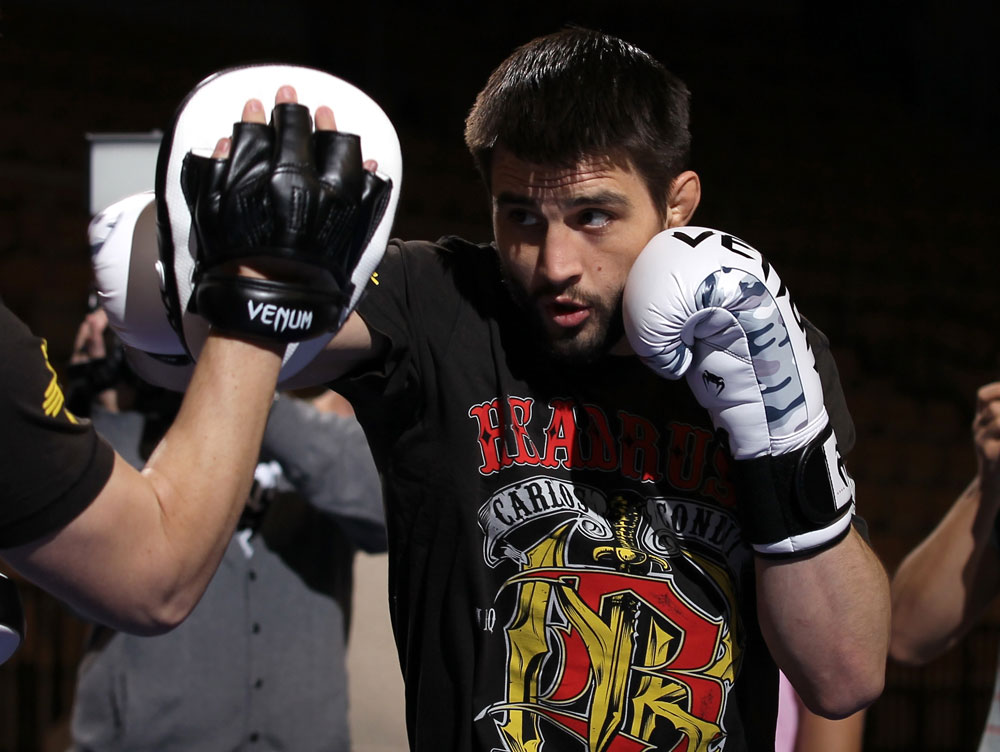 After spending the final four months of 2011 in what felt like a constant state of limbo, the 27-year-old will finally get to switch from hitting mitts with coach Mike Winkeljohn to putting his considerable talents to work in the cage. In a fitting twist of fate, Condit will get to take out the frustrations he’s endured against the man who has been at the root of many of them.

Rewind to September: Condit was slated to face UFC legend BJ. Penn in the co-main event of UFC 137, a bout that would be followed by Diaz challenging Georges St-Pierre for the welterweight title.

But when Diaz missed a string of media obligations, UFC President Dana White made a change, demoting Diaz from the main event, and elevating Condit. The man known as “The Natural Born Killer” broke down in tears on the phone when White told him the news.

Just 11 days before he was set to fight for the UFC welterweight title, Condit’s dream was put on hold. St-Pierre tweaked his knee in training; their bout was rescheduled for UFC 143, the annual Super Bowl weekend show. Diaz and Penn headlined UFC 137 instead, with Condit assured the outcome of the main event would not have an impact on his upcoming title fight.

On October 29, Diaz battered Penn before throwing down the gauntlet for GSP, questioning the legitimacy of his injury, trying to talk his way back into the fight he lost a month early. By the time White took the podium for the post-fight press conference, Condit’s fight calendar needed adjusting once again.

“There’s been a lot of ups and downs; a lot of excitement and disappointment,” admitted the former WEC welterweight champion. “It’s been crazy, as anybody looking from the outside can imagine. I think I’ve done a pretty good job of focusing on what I need to do — which is train and be prepared for whoever I end up fighting — and this time it ended up being Diaz.”

After shuffling places twice in the last six months, Condit and Diaz will now pair off, a torn ACL sending St-Pierre to the sidelines and the surgical table. With the date of his return to the cage uncertain, the top two welterweight contenders will battle for an interim version of the 170-pound championship on Saturday night.

It’s a fight that has been a long time coming for the 27-5 native of Albuquerque, New Mexico.

While Diaz began his second stint in the UFC with much fanfare and an immediate shot at the welterweight title, Condit has quietly been working his way up the 170-pound ranks.

The last welterweight champion in WEC history, he lost a razor-thin decision to Martin Kampmann in his debut, coming out on the right side of the verdict against Jake Ellenberger in his second Octagon appearance. A come-from-behind victory over Rory MacDonald at UFC 115 caused people to start taking notice, and a first-round knockout of Dan Hardy in his own backyard announced Condit as a potential contender, though he remained behind some of the more established names in the company.

“It’s hard to get out from under the shadow of these guys like (Jon) Fitch, and (Josh) Koscheck, and maybe even Thiago Alves — guys that have been in the division for years and years and years, and all had great wins.”

But now is Condit’s turn in the spotlight.

His savage first round destruction of Dong Hyun Kim was his fourth consecutive victory, the second straight bout that he’s earned Knockout of the Night honors, and the third consecutive contest to produce a post-fight bonus. Though it looked like the gods were against him, Condit’s patience and perseverance has been rewarded, and he’s ready to make the most of it.

“This is a fight I’ve wanted for a really long time, and the fact that it’s happening now, after all this turmoil and craziness with the change of opponents and everything, it really couldn’t have worked out better.

“I think that styles make fights, and I think that this style match-up is going to be extremely exciting. It’s a very tough fight; Nick’s one of the best in the welterweight division. I think there are some guys stylistically that could probably beat him, but I think the matchup between us — we’re very evenly matched. We have similar skill sets, maybe a little bit different approach — different style — but it’s exciting.”

The 28-year-old Diaz is on an 11-fight winning streak that includes nine stoppages, with victories over the likes of Frank Shamrock, KJ Noons, Paul Daley, and Penn. An enigma outside of the cage, Diaz is all business when the lights go up and the fight begins, blending tremendous boxing with a slick submission game.

He’s also adept at shaking his opponents with a barrage of pre-fight banter, an ability and instinctual talent he’s passed on to his younger brother Nathan as well. Condit is prepared for it all — the boxing, the jiu-jitsu, and the verbal jabs.

“Nick likes to get in your head, talk a lot of trash, so I need to stay composed, and step in with the attitude that I always do; just be about my business, and not get sucked into all that other stuff. I just have to fight my fight. No matter what an opponent says or how much trash they talk, I get the opportunity to go in there and beat him down. I can just hold my tongue and let it build, and as soon as the cage door closes, it’s game time.”

Condit knows he’s in for a battle, but he’s ready, and confident that if he sticks to the game plan, he’ll emerge from Saturday’s headliner as the interim UFC welterweight champion.

“Nick is probably the toughest guy I’ve ever fought. He’s an endurance athlete — he puts tons and tons of pressure on guys — and he’s got some really good skills with his hands; his jiu-jitsu’s great.

“But I just really need to fight my fight. If I do that, I feel like I’m going to walk away with the belt.”