The Long Journey Of Modestas Bukauskas

Modestas Bukauskas has traveled all around the world to get where he is today, finally a UFC light heavyweight fighter.
By Thomas Gerbasi, on Twitter: @TGerbasi • Apr. 2, 2020

“It's been a very long, hard road,” said Modestas Bukauskas of his journey to the UFC’s light heavyweight division. “Yeah man, it's been a crazy road.”

He is not joking. But where to begin with the story of the 26-year-old, born in Klaipeda, Lithuania, but a resident of London, England since he was three? Oh wait, there were the high school years in Louisiana and a stay in Albuquerque training with the best 205-pounder in the world. Did I mention that there was a girl?

Well, let’s start in Albuquerque. Bukauskas had been training in kickboxing since he was a kid under his father, Gintas. At 12, he took a break, played some basketball and wound up in the United States to finish up his high school hoops career. At 18, he was at a crossroads with no college scholarships on the horizon, so his father advised him to go back home and begin his mixed martial arts career. By 21, he was making his pro debut, and soon found his way to the Jackson-Wink MMA camp in New Mexico.

“Not that many fighters were there at the time, but (Andrei) Arlovski was there,” Bukauskas recalled. “I was training with him and he's an absolutely amazing fella. He actually paid for me to stay for another week, as well, which was very nice of him. So you can see that they saw that I had talent in me and when I was training there, and that was my first run at being pro. I went 4-0 and after that I decided to take another trip.”

This time, Bukauskas stayed ten weeks in ABQ and got in plenty of work with Jon Jones.

“I could actually train with Jon Jones and not many people get to say that,” he said. “I was a little star-struck at the beginning, but he's an amazing fella and an amazing character, and we were training every day. Imagine that you're training with the best in the world for 10 weeks and he's asking you to do more rounds of MMA because he feels you're good enough to help him. And I was 22. From that moment, I felt like I could take anything on.” 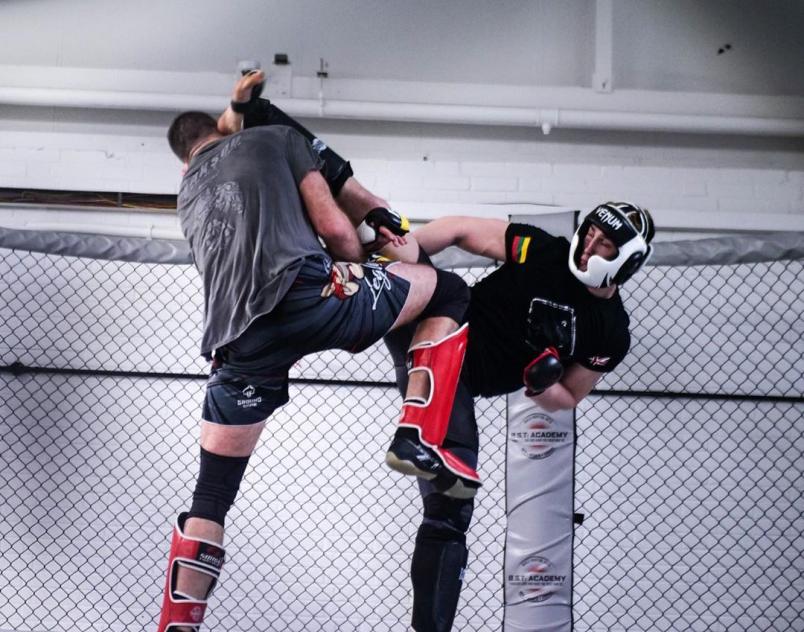 Anything soon presented itself in the form of a May 2016 bout against Pavel Doroftei. The Moldovan was a late replacement and at 15-3, he already held a win over future UFC standout Danny Roberts and a huge advantage in experience.

“I asked my coaches and they all said the same thing - skillwise you can go and beat this guy,” recalled Bukauskas. “Jon Jones said the same thing, but he also said, ‘Listen, this is a very courageous move; it's probably not the smartest move, but if you pull it off, you're gonna be right in the spotlight.’ From that advice, I decided to take the fight.”

“I felt mentally there was something that hadn't broken through yet,” said Bukauskas. “I didn't have that aggression yet.”

Oh yeah, and about that girl…

“We had a long-distance relationship,” Bukauskas said. “That was the first fight she ever came to see me fight in, and I lost that fight. And the reaction she gave me was very cold. I was distraught and very upset and everyone came up to me. She was the last person to come up to me and she didn't even hug me. From there, I could see she was starting to doubt what I was doing.”

Fight game insiders weren’t doubting the talented youngster, though, and he soon got a call from Cage Warriors promoter Graham Boylan.

“He saw potential in me and said, ‘Listen, you shouldn't have took that fight, but we're gonna get you back on track.’”

That was going to take a while, as Bukauskas’ 4-0 record went to 4-1 and then 4-2 when he lost his Cage Warriors debut to John Redmond two months after the loss to Doroftei. 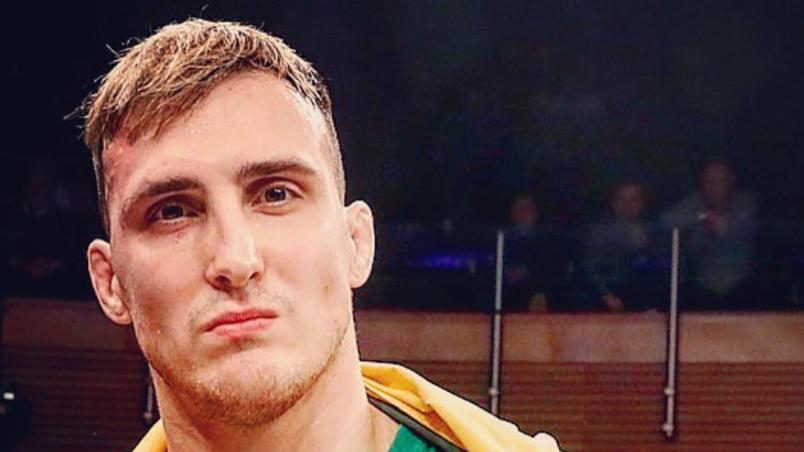 But to come back up, there were still more downs to weather. Bukauskas went back to Louisiana, not just to see his then-girlfriend, but to train and get his head straight. One day, he threw a roundhouse kick that he had probably thrown thousands of times over the course of his life, but this time it resulted in a torn meniscus. All eyes were on him once more.

“Her whole family turned their back on me,” said Bukauskas of his then-girlfriend. Then she asked that question.

“How long are you going to keep doing this fighting thing for?”

“I'm gonna do it until I'm UFC champion. There ain't no stopping me.”

After five years together, that was that. But then he also lost a sponsor who’s help was allowing him to train full-time. Bukauskas returned to London.

“I had no money, no job, an injured leg, lost a girlfriend, lost a sponsor,” he said. “And I was sitting in my room thinking to myself, 'What am I gonna do with my life?'”

That’s when he had the clearest thought yet. He was a fighter. He was going to fight.

“That was when I really had to start rebuilding everything,” said Bukauskas, who decided to move from middleweight to light heavyweight. When he got healthy, his father got him in the ring sparring with pro boxers, which cleared up a mental hurdle that he felt hindered him previously.

“I learned that I need to go and hurt these people and not just win,” he said. “When you have the mentality that you just got to win, I don't think it's enough because there's a level of aggression that needs to be put in there, and if you don't have it, you're not gonna go far.”

His close circle of friends and family got even closer, and then…

Bukauskas took a kickboxing fight which he won in the first round, and in March 2018, he was back on Cage Warriors cards. And he hasn’t tasted defeat since, going 6-0 with six finishes, a stretch that also earned him the promotion’s 205-pound title.

That run of success had him thinking about a UFC contract, but he assumed he would have to earn one through Dana White’s Contender Series. That was just fine with him, but at 1am one night / morning in mid-January, Bukauskas got a text from manager Jason House. Up at 3am for a trip to the bathroom, he decided to make the call to California.

“How do you feel about fighting in the UFC?” asked House.

“What? No way,” responded Bukauskas, who continued with the “no way” response for a little longer.

“I was going crazy,” he laughs. “I literally said ‘no way’ like a parrot for the next minute. I was dumbfounded.”

But he was all-in. And there would be no going back to bed after that.

“There was no way I was going to sleep on that news,” said Bukauskas, who told his proud father a few hours later.

“He had the cheesiest grin you could ever imagine. He was smiling like a Cheshire cat from ear to ear. It was like he expected it.”

Oh yeah, it’s been a crazy road, all right. All that’s left is for Bukauskas to show his wares in the Octagon, a moment he expects to arrive this summer. In the meantime, he works, he prepares, and he’s getting ready to show just who he is.

“We've gotta keep working hard and keep trying to get better,” he said. “I'm looking to really make a statement in the UFC and finally show my full potential.”