Joanna Jedrzejczyk is one of the greatest fighters in the UFC.

The only remaining undefeated champion in any of the UFC’s weight divisions, the Polish-born superstar has systematically laid waste to most of the women’s strawweight division in a manner that rivals current pound-for-pound king, Demetrious Johnson.

So if things are working so great, why has she suddenly opted to change things up dramatically and join American Top Team ahead of this weekend’s UFC 205 bout against compatriot Karolina Kowalkiewicz?

It’s about more than wins – the 29-year-old wants no doubt that she is the best. And she feels ATT can help her reach the next level.

“Obviously she was an undefeated world champion, so (the move) shows that she is always striving to be better, to be the best she can,” ATT coach Mike Brown said during Wednesday’s open workouts. “She’s making small improvements, but not changing too much – but there’s a lot to be gained from the team, a lot of world class training partners and world class coaches with many different ideas. 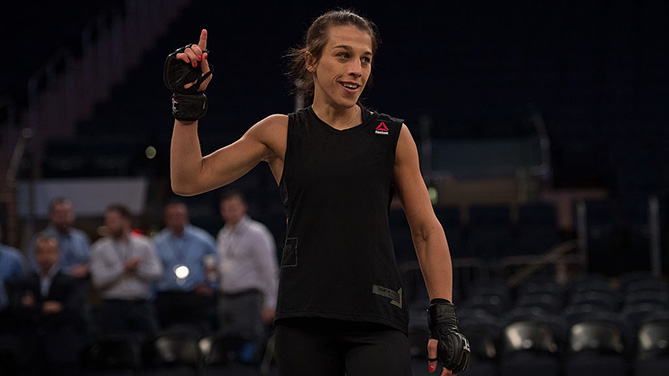 “It’s really just tightening up some things, some small technical changes but nothing major. We don’t want to change too much, she’s an undefeated world champ for a reason, but we’re improving in all areas. Small improvements, nothing major – she’ll be the same killer she has always been.”

With such a big spotlight fighting in New York City, not only the media capital of the world but also one of the biggest concentrations of people of Polish descent outside Poland, it’s clear Jedrzejczyk wants to put on a show against Kowalkiewicz.

But Brown is looking beyond this fight and into the future for the newest ATT champion, joining Amanda Nunes and Tyron Woodley.

“She’s getting better each week and I think in six months to a year you’ll see a completely different fighter,” Brown said.