Read on for UFC: Gustafsson vs. Manuwa main card results...

Number one light heavyweight contender Alexander Gustafsson kept his ranking and his hopes for a second title shot intact on Saturday with a second round TKO win over previously unbeaten Jimi Manuwa at the O2 Arena in London. And after his UFC Fight Night mainevent victory, “The Mauler” made no secret of his intentions.

Light heavyweight champion Jones, who defeated Gustafsson via decision last September in a classic five rounder, has an April date with Glover Teixeira first, but in England, the Stockholm product did his part to keep hopes of a rematch alive.

Manuwa went on the offensive at the start, but it was Gustafsson who truly drew first blood as he took the Londoner to the mat and worked on his arm. Manuwa defended well, but Gustafsson wouldn’t give up the top spot, using shots with his shoulder in an attempt to distract his foe and change position. Again, Manuwa defended well, but offensively, there was nothing for Gustafsson to worry about. With a little over a minute left, a scramble saw the two get back to their feet, and Manuwa – calm in the biggest fight of his career – stalked the Swede until the bell.

An accidental eye poke by Gustafsson brought a halt to the action early in the second, but after being cleared to continue, Manuwa went on the attack, just missing with two looping right hands. Gustafsson took advantage of his opponent’s aggression, rocking Manuwa with a knee, and then finishing things off with a series of ground strikes. Referee Marc Goddard halted the bout at 1:18 of the second stanza. 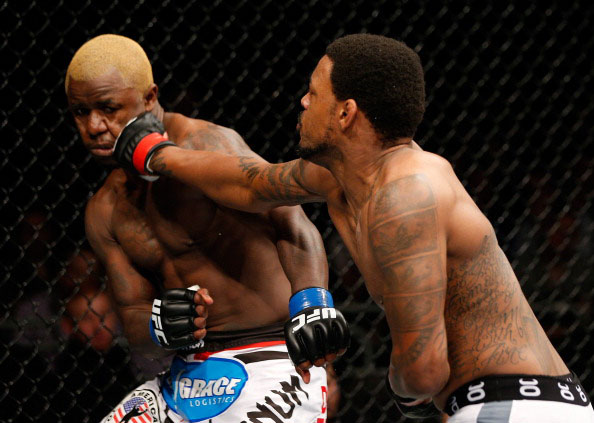 three round chess match, with Johnson emerging victorious via unanimous decision in the lightweight bout.

Scores were 30-27 twice and 29-28 for Johnson, who has now won three straight and six of his last eight.

Johnson (16-8) took the lead to begin the fight, mixing up his strikes to the body and head nicely. For the most part, Guillard (48-14-3, 2 NC) waited to counter, hoping to catch Johnson with a fight-ending bomb. “The Menace” wasn’t playing along with that mindset, getting his shots off and then moving out of range before anything of significance came back at him. With a minute left though, Guillard caught and stunned Johnson with a right hand, prompting a failed takedown attempt from “The Menace.”

The fans and Johnson got restless with Guillard’s patient approach in the second round, but “The Young Assassin” wouldn’t be swayed from his game plan. In the meantime, Johnson piled up the points for the round, even rocking Guillard with a left cross to the jaw in the closing moments.

A solid exchange opened the final round, and Johnson closed it with a quick takedown. Guillard got back to his feet just as fast, and the tense standup battle resumed. Midway through the round, a straight left rocked Guillard, and after a brief tie-up against the fence, he did it again as Guillard protested an eye poke. Johnson’s confidence grew with each punch as the seconds wound down, and his strong finish made it clear who the victor was at the final bell.

Former bantamweight contender Brad Pickett’s flyweight debut was a successful one, as the London native used his ground game to break open a close fight with debuting Dubliner Neil Seery to win a three round unanimous decision. 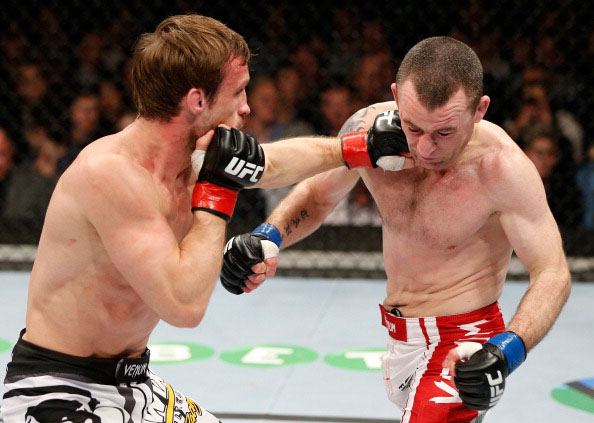 There were plenty of quality standup exchanges between the two in the opening frame, each man getting in his share of licks before Pickett scored with a takedown two minutes in. Seery tried to hold on in order to force a re-start, but Pickett was intent on imposing his ground game, nearly sinking in an arm triangle. With 30 seconds left, Seery was able to get back to his feet, landing a good left before the bell.

A slugfest broke out again in round two, with Seery able to avoid the takedowns this time around. But with under two minutes left, Pickett did get his opponent to the mat, but Seery defended well for the most part before “One Punch” closed the round with a set of forearms to the head.

Seery, putting on an impressive third round effort for a fighter coming in on late notice, tagged Pickett repeatedly in the final stanza, prompting an equally fiery effort from the Londoner, who responded with a thudding slam as the round approached the midway mark. The resilient Seery was able to get back to his feet, but another Pickett takedown in the final minute kept the Irishman from pulling off the upset.

Returning to action for the first time since February of 2013, unbeaten Gunnar Nelson wasted no time getting acclimated to the Octagon again, submitting Russia’s Omari Akhmedov in the first round of their welterweight bout.

Nelson (12-0-1) took the role of aggressor as the bout opened, putting Akhmedov (13-2) in an unfamiliar position as he backpedaled around the Octagon. In the second minute, a straight punch to the face opened up a cut under the Russian’s left eye and allowed Nelson to get the takedown. The grappling ace immediately moved into the mount position, where he delivered short and powerful strikes to the head. Soon after, Nelson patiently sunk in a guillotine choke, prompting a tap out from Akhmedov at 4:36 of the first frame.