Lombard Promises a Return to Form for His Second UFC Bout

"I can’t rush anymore, so I have to be smart and take it a fight at a time." - Hector Lombard 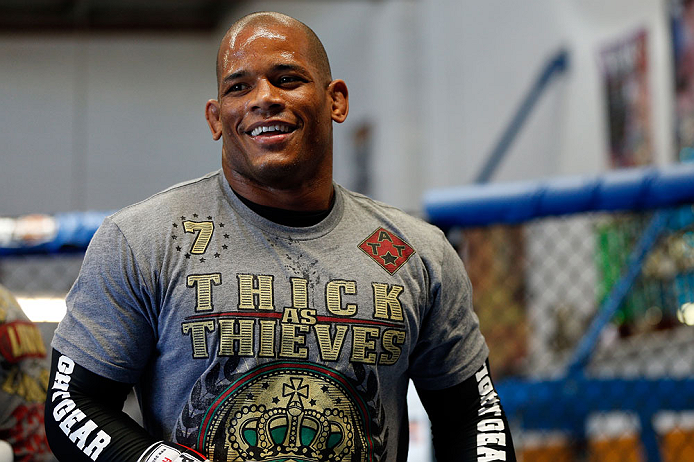 Hector Lombard may not be ready to be enlisted as a member of the Australian Tourism Board, but there’s no question that he loves the Land Down Under that he made his home for 12 years and which he will be fighting in for the first time since 2011 tonight against Rousimar Palhares.

So what is it about Australia?

“Have you been to Australia before?” he asks. “It’s nice, huh? I love the country and that’s why I stayed.”

Though born in Cuba, Lombard is proud to say that he represents his adopted home country, and he will need all the fans behind him at the Gold Coast Convention Centre for a pivotal bout that will likely determine how 2013 will turn out for the former Olympic judo player. A win, and he’ll be thrust right into the title picture; a loss, and he’ll be 0-2 in the UFC and wondering what’s next.

It’s probably not the position many expected Lombard to be in when he became one of the most high-profile signings of recent years in the UFC. 24-0-1 in the 25 fights prior to his addition to the roster, Lombard was widely considered a top middleweight that no one would have blinked an eye at if he was immediately put in a fight against 185-pound champ Anderson Silva.

But to introduce him to the UFC faithful, he was matched up with Brian Stann for an August bout on FOX. Stann injured his shoulder, leaving Lombard without an opponent. Also without a foe was Tim Boetsch, who saw Michael Bisping withdraw from their UFC 149 bout in July. With fate stepping in, Lombard and Boetsch were matched up for UFC 149.

That’s when things got interesting, as Lombard suffered some training injuries that weren’t helped by fighting a couple weeks earlier than scheduled. Regardless, he was going to fight on.

“I was eight months without a fight,” said Lombard, who went through a contract issue with a previous promotion before being freed to fight in the UFC. “It took a long time for me to get back to the cage, so I was anxious to get back in there. That was one of the reasons that made me rush. I was supposed to fight first against Brian Stann, and then things changed and I fought a month early. But the reality is that I like to fight, no matter what.”

And after all the success he had over the course of a career in which he went 31-2-1 with 1 NC, he admits that part of his reason with going on with the match had to do with the idea that no matter who was put in front of him on fight night, he was going to win.

“I had a little bit of arrogance in me and I said I won’t lose no matter what,” said Lombard. “Even if things aren’t going well in training, I’ll be able to put Tim Boetsch away. And I paid for it. I paid for my arrogance and I had to realize that you can’t underestimate anyone.”

Lombard lost a three round split decision to Boetsch in Calgary, his first defeat since 2006. But while a split decision often denotes a closely contested, back and forth war, this wasn’t it, prompting the 34-year-old southpaw to take responsibility for the loss and responsibility for bouncing back from it. So while he still has American Top Team’s Ricardo Liborio in his corner, a trip back to Australia to train has done wonders in giving him his mojo back.

“I felt that I had to do some changes in my training,” said Lombard. “I needed to do cross training and not stick so much with one thing. I tried to get stuff from everywhere, and this trip has been helping me a lot, training with different people and stuff like that, and it’s been a blessing for me.”

He’ll need to be firing on all cylinders against Palhares, the leglock master from Brazil trying to work his own way back into the win column after a May loss to Alan Belcher.

“He’s got a slick ground game and he’ll try to take the fight to the ground,” said Lombard of his foe, “but I’ll be waiting for it and I’m prepared for it.”

Yet if Lombard wins, don’t expect him to be calling for a title shot just yet.

“I want to fight a couple guys before that, so I’m not thinking about fighting for the title yet,” he said. “I can’t rush anymore, so I have to be smart and take it a fight at a time.”

And enjoy the sport, something he’s always taken to heart in good times and bad.

“I like the sport for real,” said Lombard. “I don’t like the sport just to get the fame and take advantage of being famous right now. Even if I wasn’t making any money, I would still be a fighter, and that’s the difference between me and other guys up there that just fight for the wrong reasons. I fight because I’ve always liked fighting and I always liked the competition. I never fought because of the media or because of money or anything like that. This is what I like to do, and I want to keep doing it as long as I can, and keep focused.”

So what should UFC fans underwhelmed by Lombard’s first UFC appearance expect the second time around?