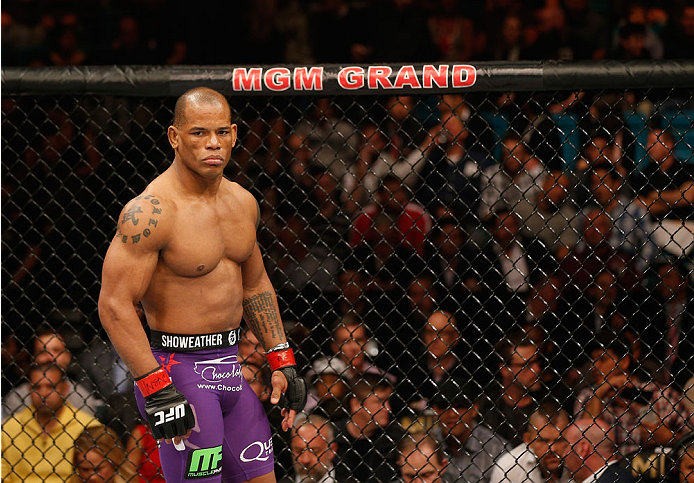 Hector “Showeather” Lombard faces Neil Magny at UFC Fight Night: Hunt vs. Mir on Saturday, March 19 (March 20 in Australia) in Brisbane, Australia. The co-main event will mark the Cuban judo fighter’s return to the Octagon after more than a year on sidelines due to a suspension.

“I’m ready to get back in there,” Lombard, who will be giving up a nine-inch reach advantage to the 6’3” Magny, said. “He’s very tall and hits really hard, but so do I. I’ve fought much bigger guys than him. I’ve fought heavyweights, so his size doesn’t matter to me.”

Lombard has been lobbying for a big fight since he entered the UFC in 2012. His win over Josh Burkman in January 2015 was overturned to a no-contest after Lombard failed a post-fight drug test. He was widely rumored to face No. 1 contender Rory Macdonald, but that fight wasn’t in the cards, as the Canadian recovered from his epic title bout with Robbie Lawler last summer. Lombard also said he tried to get a fight with surging welterweight Demian Maia.

“He doesn’t want to fight me either,” said Lombard, who has made a lot of noise after MacDonald took a fight against Stephen “Wonderboy” Thompson.

Magny is ranked ninth in the official UFC rankings, whereas Lombard is ranked 13th in the welterweight division. A win over Magny – who is riding back-to-back wins coming into this bout – would be a good start for the 38-year-old as he makes a run toward champion (and teammate) Robbie Lawler.

“I want to fight for the title. I’m ready and I believe I’m in the best shape of my life,” the American Top Team product said. “This camp has been very good. I brought in different sparring partners to help me get ready, but (Magny) doesn’t do anything I haven’t seen before. I just worry about what I’m going to do and do my game plan well and I will be in good shape for this fight. I’m a very well rounded fighter and I’ve always been a well rounded fighter. I am a black belt in judo and in Brazilian Jiu-Jitsu, but I am a very good striker, as I’ve proved many times with knockouts.”

A veteran of over forty professional fights and a 2000 Olympian, Lombard knows that winning in impressive fashion will go a long way toward a shot at the belt.

“Neil has a good record and a win over him, especially a spectacular win, will make a lot of noise and hopefully propel me to the title,” he said. “A lot of these guys don’t want to stand with me because they know I will knock them out, but Magny is a guy who comes to fight and it should be exciting for the fans. This is a fight I wanted.”

Both fighters have a lot to gain with a victory in this bout. The champion, Lawler, still doesn’t have an opponent for his next title defense, and the division has been fairly unpredictable since long time champion Georges St-Pierre walked away from the sport over two years ago.

“Right now, anyone in the top ten could get the call to fight for the title,” Lombard says. “I need to get myself up there. I believe I’m already there, but I have to perform better than I did in my last fight. This is an exciting fight for many reasons, and one the fans shouldn’t miss. I fight with all my heart, through any ups and downs.”

Indeed, Lombard has showed heart on many occasions, and as he enters perhaps the most important bout in his UFC career, he has faith he will come out the victor in Australia, a place Lombard knows well after defecting there from his native Cuba.

“I have many fans over there. They always come out cheering and respect a good fight,” he said.