Loma Lookboonmee Was Born For This

“I have chosen this path since childhood. Since I was a child, I've never had many friends because I've always been training and competing. But the money I've made through fighting, I've used to support my family."
By Thomas Gerbasi, on Twitter: @TGerbasi • Feb. 19, 2020

A lot of fighters say they were born for this sport. When Loma Lookboonmee says it, there’s a lot more weight attached to it, considering that since she was eight years old, she’s been fighting professionally.

For most of us, that’s an unfathomable reality. But for the daughter of Boonmee Suphisara, it was a given that once she was able to make it to the gym on her own two feet, she was going to be throwing those feet…and hands and knees and elbows.

The result was a young lady who became one of the most decorated Thai fighters in the sport before making the move to mixed martial arts, where she is now 4-1 as a pro as she approaches her second UFC bout this weekend against Angela Hill. And while there were endless sacrifices to be made to reach this point, Lookboonmee wouldn’t change a thing. 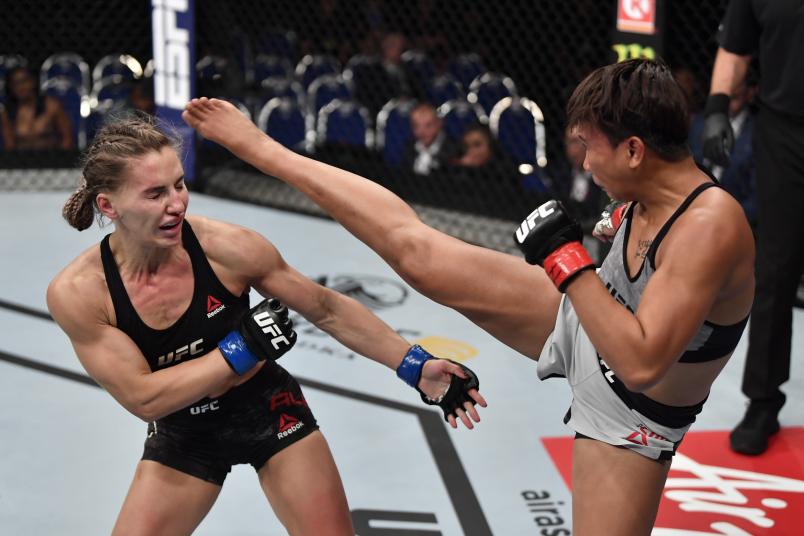 “I have no regrets,” she said. “I have chosen this path since childhood. Since I was a child, I've never had many friends because I've always been training and competing. But the money I've made through fighting, I've used to support my family. I put my older sister and myself through school, all since I was just a child. We never had much growing up, so we all had to fight. Both of my sisters fought, my dad too. We don't know what we sacrificed, because it was just the way it was. I just wanted to help my family, and give them a comfortable life, that's all.”

It’s a reminder that fighting is often a way out of a tough situation, and growing up in Buriram, Thailand, Lookboonmee and her family had to struggle to make it. But they did, and in the process, Loma became a star. So why change? Why leave a sport while on top to take up an entirely new one from the ground floor?

“In Thailand, Muay Thai is much more popular for men than for women,” she said. “Men can also make a lot more money fighting at Lumpinee and Rajadamnern Stadium, but for women it's not possible. Being a Muay Thai champion is the highest point for women, and once there, there is nowhere else you can go. It is different for men. It made me want to try something new and challenge myself. I wanted to keep learning.”

She’s a quick study. Training with the Tiger Muay Thai squad in Phuket, Lookboonmee has been nearly perfect since turning pro in 2018, earning a call to the UFC after just four fights that included a pair of bouts in the Invicta FC promotion. And in her Octagon debut in October, she decisioned Alexandra Albu and got her strawweight career off to a winning start.

“For my first fight in UFC, I can tell you that I was so excited to get to fight,” she beams. “It has been my dream ever since I started practicing MMA – UFC is the best. Albu is very strong and she was relentless. I threw everything I had - elbows, knees as hard as I could - to stop her from coming in, but she persisted. I found out after the fight that she dislocated her finger in the fight. I really admire and respect her, even though she ripped my shirt and pulled my shorts.”

Lookboonmee laughs, truly happy to be at this point in her life and her career. She’s seen a lot in just 24 years, but there’s no place else she’d rather be, and that joy is evident to everyone who runs into her, especially in Thailand, where she is a role model to a new generation of fighters, both male and female.

“I'm very proud to be the first Thai fighter in the UFC, and to give other Thai fighters hope and the motivation to train hard so that they might someday also make it to the UFC,” she said. “I think there will soon be more Thai fighters in the UFC.

“Since becoming the first Thai in the UFC, I think Thai people have now become more interested in the UFC. Some people didn't even know about it, but then saw me in the news and then started following me and reached out to me to give me encouragement. Before my fight in Singapore, I opened my messages and saw that so many people had reached out to support me. I didn't know, but there were many Thai people there to cheer for me. I think it has definitely created more interest for the UFC in Thailand.”

This weekend, she’s on the road again, this time to face the surging Angela Hill in Auckland. Originally slated to take on Hannah Goldy, an injury scrapped that matchup and instead put Lookbookmee in with a fellow striker in “Overkill.”

“I think fighting Angela Hill is a good thing,” she said. “It's a really good matchup for me and I like watching her fight. I watched her fight live at UFC 238; it was my first time going to a UFC event and at first when I when I saw her I thought she was about 23-24 years old because she was so strong. Then I found out she was 35 years old. Wow, 35 years old and still so strong. I am really excited to get to fight with her.”

The matchup is a great one on paper, and an important one for both fighters. Those are high stakes and that’s just the way Lookboonmee likes it, because after a life in combat sports, fight nights are the best nights.

“This year, or any year, is going to be great for me.”