Loma Lookboonmee Is Appreciating Every Moment

Thailand's Loma Lookboonmee Is Grateful For Every Moment As She Prepares To Take The Stage For The First Time In The 'Fight Capital Of The World' At UFC Fight Night: Reyes vs Prochazka
By Steve Latrell, on Twitter: @TheUFSteve • Apr. 27, 2021

Some kids grow up dreaming of fighting for the UFC, and for others, the dream finds them. In the case of Thailand’s Loma Lookboonmee, it’s definitely the latter.

“I have to admit, I didn’t know what the UFC was or what MMA was.”

Steeped in Muay Thai and boxing since the age of eight and garnering three IFMA gold medals along the way, it was a chance encounter that forever changed her trajectory.

“It wasn’t until I was on the national team and I was training at a gym in Bangkok, Kaitlyn Young came and asked me ‘Do you want to fight MMA?’ At that moment, I discovered MMA. When I signed with Invicta FC, I learned that UFC is the largest fight organization in the world and at that moment I knew I had to be in it.” 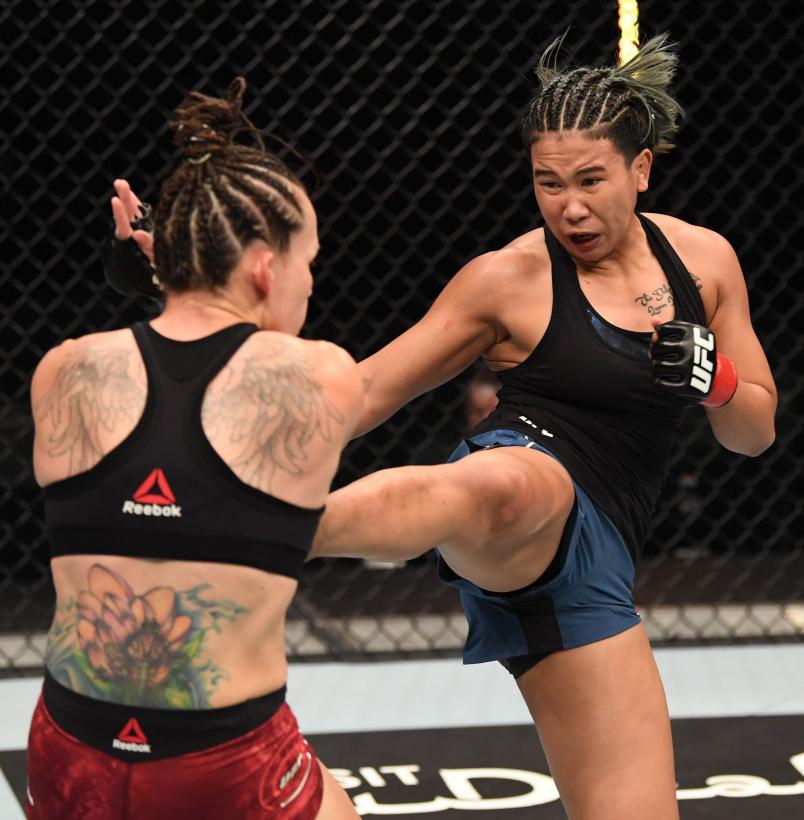 The fact that Lookboonmee was signed to the UFC after just four professional bouts is a testament to how naturally her Muay Thai mastery translated into a tenacious mixed martial arts game. Training the sport only since 2018 at the famed Tiger Muay Thai camp, she validated the instincts of the UFC brass who signed her, cruising to victory in two of her first three bouts.

“When I had my debut, I remember when the song by [famous Thai artist] Body Slam came on and I just thought ‘I’ve got to do this. I’ve got to win. I’ve got to bring it home. I immediately thought of my home and my country. It’s the most memorable moment of my debut.”

Getting her hand raised that night against Alexandra Albu was pretty memorable, too. The first and only UFC fighter to represent Thailand had just become the first one to win a fight in the promotion.

“It means the world to me to be representing Thailand on such a big stage. I just want to thank everyone who has been part of my journey for getting me here today.”

"It means the world to me to representing Thailand on such a big stage."@LomaLookboonmee discusses learning about the @UFC and what it means to her to compete at such a high level 🔊⬆️ #UFCVegas25 pic.twitter.com/1pIGaqykqA

Here today means the UFC APEX in Las Vegas, NV, where she’ll appear on the prelims of UFC Fight Night: Reyes vs Prochazka.

“When I first found out I was fighting in Vegas, I was so excited. I called my sister right away. This is the fight capital of the world!”

“It was a really long trip to get here. I’m ready to fight. I’m ready to go,” she says enthusiastically. “I’m so excited. This is my first time in Las Vegas.”

RELATED: Loma Lookboonmee Was Born For This | Fighters On The Rise

This weekend she draws Sam Hughes, a fighter who knows about short-notice bouts vs veteran strawweights. She made her UFC debut in a loss to Tecia Torres last December. Hughes has a full camp under her belt this time, but it doesn’t seem to faze Lookboonmee.

“She lost her debut, and she’s going to lose this one, too,” she says with a polite smile.

Her confidence isn’t unwarranted. Her lone Octagon loss when was to veteran Angela Hill, a short-notice replacement for her original opponent, Hannah Goldy. Hill is a tough out at any stage of a career, let alone your sixth professional MMA fight. But the strawweight still managed to go the distance when they tangled back at UFC Auckland in February 2020.

She took what she learned from 15 minutes with one of the division’s best and bounced back with a dominant win over former Invicta FC champion Jinh Yu Frey on the October incarnation of UFC Fight Island.

Her potential had been obvious long before that fight, but the performance sealed the deal for the UFC, who gave Lookboonmee an extension soon afterwards. The future is looking bright for the 25-year-old.

“I have to admit, at the beginning I was a little bit scared they wouldn’t renew my contract. I just made sure to bring my best each and every fight to show everyone what I’m made of. I trained so hard—I always train hard—every single fight I don’t take for granted. When I got the contract renewal, I was just so ecstatic.”