Not many people get what they ask for in this world. Featherweight Artem Lobov agrees, but he’s happy that a recent wish resulted in a main event fight with Cub Swanson this Saturday in Nashville.

It was a request that surprised some in the MMA world, but after the unranked Lobov picked up his second consecutive UFC win over Japanese prospect Teruto Ishihara, he felt he had earned the right to face one of the division’s top guns.

“It gave me the confidence to ask for the Cub fight,” the 30-year-old Lobov said. “Without that performance, they (the UFC) wouldn’t have given me Cub. He’s too high up in the rankings. But with that fight, they thought, ‘Okay, this guy can fight. Maybe we should give him a chance and see if he can hang with the top dogs.’ So they’re giving me Cub now and this is my chance to prove myself. If I beat him, I get to move on to much bigger things. And if I don’t, well, then I don’t deserve to be there and I’m cool with that.”

Such an honest assessment is rare in any walk of life, but particularly in the fight game, where hot air can often replace reality. That’s never been the case with the Russia native, who has a healthy relationship with the truth.

“I love the truth and, to me, it’s something that’s just there,” he said. “Some people can love it, they can hate it, but you can’t change it. This is what it is. So whenever I say something, I’m always trying to give my honest opinion. Sometimes I’m right, sometimes I’m wrong, but I’m always honest about what my thoughts are.”

He’s also honest about the way he approaches his career. And though he will not wow anyone with his current 14-12-1, 1 NC record, it’s a slate earned the hard way.

“I wanted to do it in a true way, a real way, no bulls**t,” Lobov said. “I never wanted somebody to come up to me and say, ‘Great fight,’ but in the back of my mind I know that I was given that fight, I was handed an easy one. I never wanted that feeling. I’d rather take a loss than take an easy fight.” 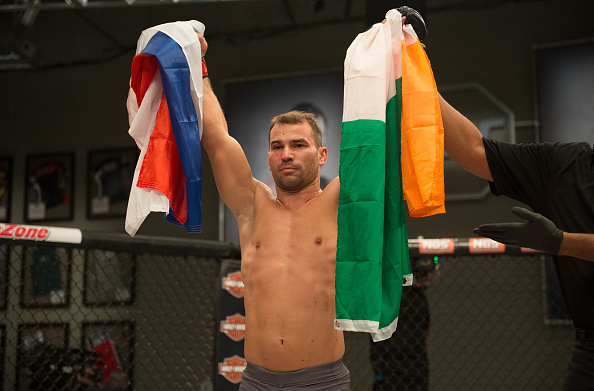 So call the SBG Ireland Lobov the fighting equivalent of a fireman, as he will run to danger instead of away from it. Some would say that’s not the best way to build a career, but building a career was never the point for Lobov. He wanted to fight the best available competition from the start. And that makes him a rare breed.

“They (fighters) all speak about how much they want the challenges,” he said. “They all say that they will fight anyone. But then when you look at the records, I’m one of the few that actually goes through with that and stands by those words. I don’t just throw words into the air and say things for the sake of saying them. When I say something, I stand behind those words, I mean them one hundred percent. So when I was up and coming, just like everybody else, I was also saying those things that I wanted the hardest challenges and that I was in the sport for the challenge. And my actions followed my words.”

On The Ultimate Fighter 22, Lobov finally got his opportunity to shine on the big stage, and while he lost his first bout on the show to Mehdi Baghdad, he was brought back to the competition and made the most of it with a trio of knockout wins. He dropped the final to Ryan Hall in 2015 and a subsequent bout to Alex White, but with his back against the wall, he delivered wins over Chris Avila and Ishihara.

Then he watched Swanson’s epic win over Dooho Choi last December and found the man he wanted to fight next.

Swanson enters Saturday’s bout on a three-fight winning streak and he’s also ranked fourth in the world at 145 pounds. It’s going to be a test for Lobov, but he promises he will do what it takes to pass it.

Greatest of all-time? That’s some prediction.

“Hey, that’s the way it is,” Lobov said. “You’ve got to set your goals nice and high and plot your way towards that. If something doesn’t work, you change the route a little bit, but don’t change your goals. Don’t change your dreams. Set it and then chase them, no matter what. And that’s what I do.”

A win over Swanson would change the landscape for Lobov quite a bit. So how does he see the future? Will he be content with fighting quality foes and putting on memorable fights, or is there more for him?

“My main goal has always been to fight the toughest fights and take on everybody,” he said. “But it happens to be that the toughest guy always holds the belt, so eventually I do want to challenge for the title and I do see myself fighting for that belt in the future. And if I’m honest, the way I see it when it’s all said and done, there’s gonna be a mountain of corpses behind me and that gold wrapped around my waist.”