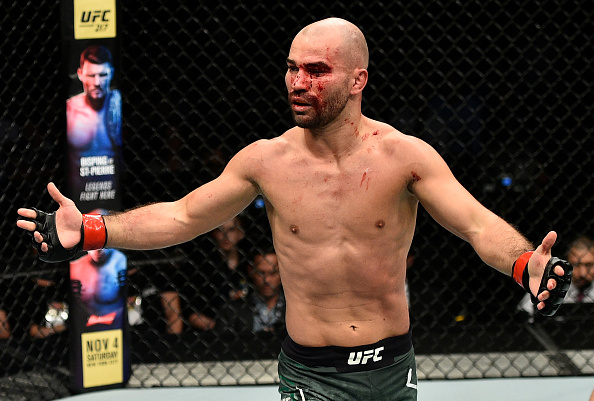 Artem Lobov has always been a citizen of the world. A native of Russia who makes his home in Ireland, Lobov’s fighting passport includes stamps from the United States, Poland, England, Sweden, Scotland, Jordan, France and Ukraine. But never Canada.

Until now, when “The Russian Hammer” faces Michael Johnson in the co-main event of the October 27 card in Moncton, New Brunswick.

“Canada's a good spot,” Lobov said. “I've been there a few times and it's been nice, so it's good to fight there. Now the place that I'm fighting, I'm not gonna lie, I didn't even know where it was. And even after looking at the map, I was like, that's a very unusual place to have a fight in, but I don't mind. I know Canadian fans are good, they love MMA, so I'm sure it's gonna be a great night.”

And truth be told, while this will be a co-main event in a place he’s never fought in before, as far as Lobov is concerned, any fight anywhere on a card against any opponent would be just fine with him.

“I'm eager to go, for sure,” he said. “This has certainly been my longest break ever. I've not fought for a year now, and I can't wait to go.”

It’s been an interesting stretch for Lobov since his October 2017 loss to Andre Fili. Scheduled to return in April against Alex Caceres, Lobov was pulled from the card after an altercation with Khabib Nurmagomedov on fight week led to teammate Conor McGregor’s much publicized bus incident in Brooklyn. Then scheduled for a Moncton meeting with Nurmagomedov’s teammate Zubaira Tukhugov, Lobov saw that bout fall by the wayside when Tukhugov was removed from the bout. Now Johnson is in, and Lobov is just happy to be able to punch somebody.

“I never really get ready for a certain style,” he said. “I just go into the fight and implement my game plan and do what I want to do. It doesn't really matter to me what the opponent does.”

Of course, the bad blood between the Lobov and Tukhugov camps added a layer of intrigue to next week’s event, and the 32-year-old won’t deny that he had a point to make in the Octagon.

“I just have that extra bit of motivation from the back of my mind,” he said before the fight was scrapped. “I've got this extra fire burning inside now, like I have a point to prove. But it certainly didn't take the enjoyment out of it; I still love it and still wouldn't want to be anywhere else.”

Given what happened before and after UFC 229, though, it’s probably for the best that neither team is around each other anytime soon, and that the focus switches to what happens in the Octagon, and not on anything else. Lobov is fine with that, because fighting in the Octagon is the only thing he wants to do. He’s an old-school battler, and when I joke with him that when fighters say they would fight for free, he would actually mean it, he laughs.

He’s not fighting for free anymore. But the gritty mentality stays unchanged. Even with a year out of action, he’s staying sharp the way fighters do.

“You just spar on a regular basis and it's all about putting yourself in those difficult situations,” Lobov said. “If you spar, pick the hardest sparring; if you run, pick the hardest roads. That's the way I always approach it. If I spar someone and it's an easy spar, I don't really want to spar them again. But if I spar someone who's really hard, I'll go back there again until it becomes an easy spar. That's how you ensure that the evolution never stops and that you stay sharp and you stay up to date.”

And in a few days, the wait is over. Artem Lobov gets to breathe again.

“There's a lot of talk, but in that cage, there is nothing but you, your guts, your skill against your opponent and his guts and his skill, “he said. “And we're gonna find out who's got the bigger heart on October 27.”